IT IS HAPPENING, HETERODOX LOVE AFFAIR WITH POPE FRANCIS A FLASH IN THE PAN 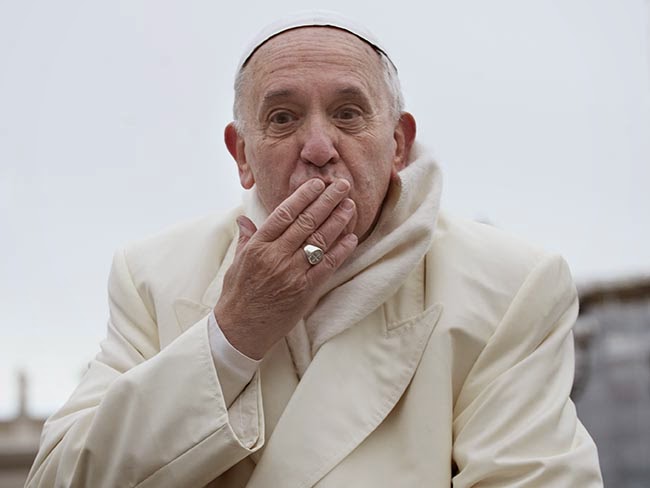 From the international Irish Central:

It couldn’t last forever.
Sure, things were giddy for awhile. Pope Francis certainly seemed to have the stuff of a rock star pope. No wonder he was on the cover of Rolling Stone magazine!
But for all the cool things he said, there was still a church to run, a church to drag – perhaps kicking and screaming – into the 21st century.
Well, the dragging has begun. And so has the kicking and screaming.
Over in Cincinnati, the lay organization Voice of the Faithful, which rose to prominence in the wake of the horrors of the sex abuse scandals, has taken on a new battle. The group has paid for numerous billboards throughout the Ohio city asking: “Would Pope FrancisSign the New Catholic Teacher Contract?”
The city’s 2,000-plus teachers have been asked to sign an expanded contract which ensures that in and out of the classroom – in their private lives – they maintain rigid adherence to Catholic doctrine.
This includes not promoting “homosexual lifestyles,” not engaging in pre-marital sex and not publicly supporting other issues which go against church teaching.
Do we really want Catholic schools teachers fired because they were overheard supporting gay marriage or birth control or because they become pregnant while unmarried?
This has already led to one teacher quitting her job because her own son is gay.
“In my eyes, there is nothing wrong with my son,” teacher Molly Shumate was quoted as saying in the Cincinnati Enquirer. “This is what God gave me and what God created and someone I should never be asked to not support.”
Shumate has refused to sign the contract, saying it would send a bad message to her 22-year-old son.
Cincinnati Catholic officials suggest that there is no reason for this to split a family up.
“Our culture is changing rapidly in this area, and many of our school employees, including me, have family members who are lesbian, gay, bisexual or transgender,” Catholic School Superintendent Jim Rigg was quoted as saying.
“As Christians, we are called to love and serve all people. While the church’s stance on homosexual marriage is well-known, this does not mean that our teachers will be asked to cast away loved family members.”
No, but didn’t a certain fairly important fellow in Rome once say “who am I to judge?” when asked about gays? Well, it does appear there is quite a bit of judging going on here.
Meanwhile, also this week, Irish American New York Times columnist Maureen Dowd wrote a piece unfavorably comparing Pope Francis’ treatment of nuns to that of his grim predecessor, Pope Benedict.
“Pope Francis appears guilty of condoning that most base Vatican sport: bullying nuns,” Dowd writes. “The cool pope suddenly doesn’t seem so cool, allowing Rome’s grand inquisitors to torque up the derogation this Mother’s Day of the American sisters who have mothered so many — even as an endless parade of ghoulish priests were shielded as they defiled vulnerable kids in their care.”
Dowd is referring to German Cardinal Gerhard Müller’s recent criticism of the largest group of American nuns, the Leadership Conference of Women Religious. They had been planning to honor Fordham theologian Sister Elizabeth Johnson, who has been critical of the inferior position of women in the church.
As Dowd wrote: “Last year Pope Francis said he would let the Vatican’s coercive reform of the nuns’ group continue. And this past week, he was silent following Müller’s mauling of the nuns.”
For all of the goodwill Pope Francis has fostered, people are starting to wonder how much of this is about style and how much of this is about real substance.
How different will the church really be after Pope Francis’ papacy? Will it be reformed in a way that is relevant for the 21st Century? Will the church continue to deny leadership roles to women, disregarding all of the talent and experience nuns have?
And will it remain obsessed with the sex lives of the dwindling number of folks in the pews? (This after years and years of ignoring the sex lives of its priests.)
It’s time for parishioners to judge Pope Francis on issues of real substance.

Ireland is a swamp of unbelief. It is way too early to know just how Pope Francis will turn out...

Here we go. Pope Francis clearly loves being the golden boy of the left. If he senses they are unhappy with him it will push him to be even more liberal. If he hears this god only knows what questionable thing he will say or do next week to get the left back on his side.

Last Week the MSM noticed Pope Francis was talking the Devil, that's was a bridge too far for our leftist friends.

In today's homily we were taught about the meaning of 'arguer' and the translation to 'convince' as in we will convict ourselves by our own words.

I suspect that some siblings of priests are of same sex attractions who struggle with chastity, appreciate the Church's teaching on chastity since it comes from the Holy Trinity. I would suspect there are many Catholic school teachers who have children who oppose chastity and live their sex lives as though Christ does not exist. But I doubt that any of these teachers get fired unless they turn sin into an ideology and a right and an agenda to change Christ's teaching on chastity. Then they thread on thin ice.

This is how the Irish destroy civilization.

JBS, Know why they invented whiskey?

To keep the Irish from ruling the world.

The very worst thing the Vatican can do to the LCWR is to disband the group. The member congregations would then form an independent group to replace it, called the LCWR. Nothing would change because these post-Christians are protesters by nature and have not the slightest concern for anything the CDF has to say to them (unless it's giving them awards or doctorates, both of which they seem to crave).

I have a child and a grandchild who are gay. I love and support them totally. If my bishop finds out, do you suppose he'll kick me out of the Church?

Gene...what will you do if that lovely child you're holding in your photo comes to tell you she is a lesbian?

JBS, Yeah, but at least it would be public knowledge that the Church disowns them. Let them stomp, whine, and cry. Who cares about a bunch of rabid hags spouting nonsense as long as they are outside the Church?

My oldest son and I were at Fr Dawid's last last Mass for today. We were feeling sad and missing him when we left the Church. When we reached the car, the first thing we noticed was a rainbow in the sky, and we knew that he would be okay.

"Any comment that is vitriolic and disrespectful of the laity in general, and Pope Francis, bishops and priests in particular will not be posted!"

"Who cares about a bunch of rabid hags..."

Anonymous, Let me tell you what I would not do…stomp and snort and cry and moan and try to get the Church to change Her teachings just to make me feel better.

RE: Rabid hags…I think FR. is talking about personal attacks, like if I said,"Anonymous is a pitiful, soul-less apostate." Using a generalized term in reference to a group of unspecified people is different. But, if you don't like "rabid hags," how about "a bunch of butch b**ches." There…fixed it. LOL!

Anon et al, you are testing a statement the Church and the Pope didn't make: kicking people out or doing anything to hurt them in response to their disorder. Continuing ng the discussion, even academically, supports that liable.