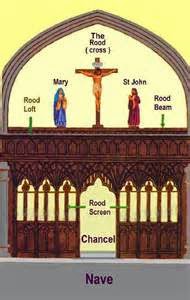 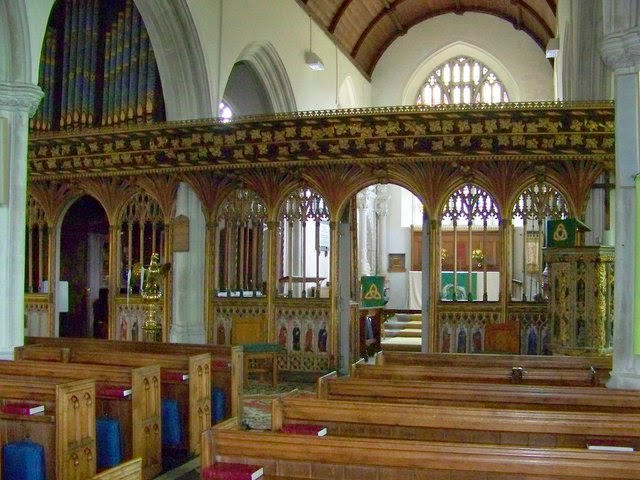 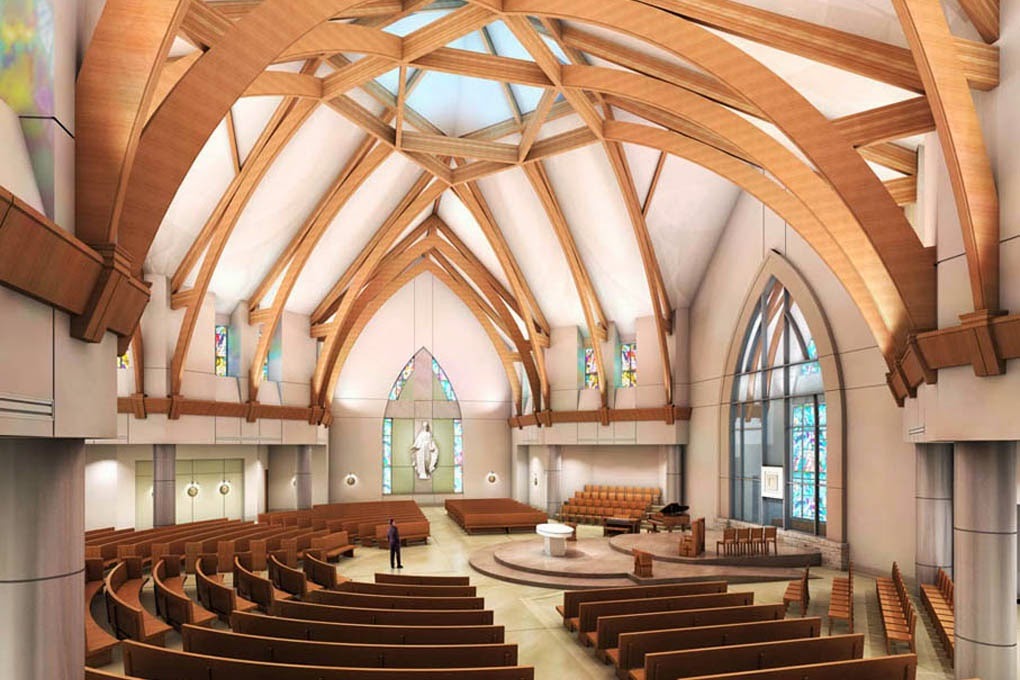 Maybe the metaphors of kitchen, cooking, presentation in dining room to eating and drinking are too banal and secular for the Holy Sacrifice of the Mass, but these metaphors can be helpful.

I personally don't like open concept homes where everything is in one room, like the family room, dining room and kitchen.

Real cooks make a lot of noise and a big mess when they cook, pleasant and unpleasant smells come forth. Pots and pans a clanging, oil is splattering, water is running, and there are smells and smoke and steam and gross things in the kitchen. Let's face it dead animals are being prepare for consumption. Humans like to eat dead animals and their body parts.

So a kitchen that is away from the rest of the living area and with a door that can be closed if things get too loud is what I like. Why should the cook be engaged with others in the living room as s/he cooks? Should the focus be on cooking not engaging others?

The same is true with the Mass. The modern concept of the Ordinary Form is that the cook/priest always be in the living room of the congregation engaging them with his smile, good manners, great acting skills and effervescent personality.  And when he cooks (offers the bread and wine and then offers the Bread and Wine in the Eucharistic Prayer) he needs to be in the living room doing it so he can engage the congregation.

In the Old Testament Sacrificial worship where real animals were sacrificed/slaughtered and then cooked over a real fire, this action of the temple priests was in a completely separate location from the congregation. Once the sacrifice took place and the animal was offered to God, the animal was cooked and served with the temple priests eating first or at least sampling and then bringing it to the place where the congregation was, their separate dining room.

In the western Christianity's Mass, the rood screen acted as the barrier between the kitchen and dining room or its adaptation the altar railing. In the east the iconostasis cut the kitchen off from the dining room.

There were separate locations for cooking and eating and the cook/priest didn't have to hobnob with the congregation while he cooked and prayed on their behalf. He had more important things to do: pray and sacrifice.

What in the name of God and all that is holy is wrong with having the Ordinary Form of the Mass celebrated in a pre-Vatican II style Church as a pre-Vatican II Church would have been designed and with the high altar against the wall and higher, much higher up than the nave of the church and ad orientem?  Why not have the cook/priest doing what he is to do to prepare and offer the Sacrifice to God and then the cook/priest turns to the congregation at the "Behold the Lamb of God..." and the congregation in their living and dining room space coming to their table which is the Communion Railing?

Are not priest and laity together in this concept also? Is not the Word of God still proclaimed and served? Is not the bread and wine prepared and offered? Does not the bread and wine become the Bread and Wine, the Body and Blood of Christ at the consecration? Does not the priest then offer our Lord and His one Sacrifice to God the Father in an "unbloody way" and does not God the Father graciously accpet this Sacrificial Offering and return it to the cook/priest for Him to consume and drink?

Does not the cook/priest then turn to the congregation and they come to participate in the Body and Blood of Christ offered for them and their salvation as Food and Drink for the journey to heaven?

Now I think about it, it was that kind of logic that inspired the puritans to desecrate rood screens of all types, so I'm a little uncomfortable taking their side...

In the Latin Church, the silence of the Canon once served as a sort of iconostasis between the sanctuary and the nave. In its absence, perhaps we need to borrow ideas from the East. This would help bring us closer to our Eastern brethren, and highlight the Jewish foundations of our liturgical development. The more substantial chancel screens you posted could be a via media between the East and our modern norm.

As for the kitchen analogy, I would only add that the first purpose of the old Temple sacrifices was not to feed, but to transform the victim into smoke that could drift up towards God, at least symbolically. Your analogy, however, is still useful.

It's risible to think that somehow today our Roman liturgy is more "Eastern" than it was in the past, even if this was a desire of some reformers.

The Roman Rite is is vastly further from the Eastern Rites today than it was 100 years ago.

The culinary metaphor is apt, in that a priest celebrating versus populum looks for all the world like a celebrity TV chef demonstrating a recipe and talking to the audience throughout.

However, the traditional separation of nave and presbyterium also signifies a strict separation of clergy and laity, and a hierarchical one at that; even within the sanctuary the hierarchy is maintained by means of the steps, and many medieval English churches still have the carved three-level sedilia on the epistle side for priest, deacon and subdeacon.

If you are determined to adopt the untraditional practice of inviting lay people into the sanctuary (even women in some cases), often in street clothes, to perform such roles as reader or EMHC, then you might as well have the equally untraditional modern layout which effectively brings the sanctuary to the people.

In the absence of clerics it is acceptable to give roles in the sanctuary, ex temporanea deputatione, to so called 'lay clerks (men or boys), either as servers or singers, and they wear clerical choir dress. Even after the Novus Ordo was adopted female lay readers (they're not Lectors, by the way) and singers were not allowed in the sanctuary during Mass, and the fact that it is now (grudgingly) permitted does not make it desirable or acceptable.

Even in traditionalist parishes there is a tendency to stuff the sanctuary with redundant altar boys so that no-one feels 'left out' (this is a hangover from pre-conciliar days, and was as reprehensible then as it is now).

"Pots and pans a clanging, oil is splattering, water is running, and there are smells and smoke and steam and gross things in the kitchen."

"Gross things" in the kitchen? What the heck were your parents doing when they cooked?

Surely returning to the traditions and customs proper to the Latin Rite is preferable to borrowing from the East.

Anyway, I don't think that such "borrowing" would have a good effect on relations with the East as you posit.

The point is that the priest receives the earthly sacrifice of the congregation, then dares to enter into the Holy of Holies to offer the Lamb of God to our Heavenly Father. Afterwards, the priest brings this Eternal Offering out to the congregation in the form of Holy Communion.

The act of offering the Sacrifice is not visible, so why look at the priest? God the Father is the focus of attention at this point in the Mass. That's why the sacrificial prayers are addressed to the Father, rather than to Christ.

The old Temple veil was "rent in two" because the Eternal Sacrifice of the Cross replaced the daily offerings at the Temple.

The Sons of the Reformation understand none of this, and so they protest against it.

Speaking of temple veils, perhaps we might recall the curtain that during the Canon hung from the ceiling in ancient Roman churches to--especially if the altar faced the people in order that the priest offering sacrifice could face ad orientem toward the rising sun whence Our Savior will come in glory--to shield the Holy Sacrifice from profane gaze, and for good measure catechumens were asked to vacate the premises altogether. And I suspect the gazes are more profane today than then.

Had the internet existed in the 1950s we would not have these liturgical blogs trawling over every aspect of the liturgy or looking to papal Masses to show the way; the fact that Pius XII preferred the Low Mass was not really relevant. For Catholics in England, and I assume in north America, the Mass was the Mass, full stop.

That it was in Latin was a fact not to be disputed; everyone had a bi-lingual Missal and in any case it distinguished us from Protestant sects who used the vernacular and had no connection to the Universal Church.

For the first time in two millennia, and in a space of three years (1964-1967) we were told that we had to worship in a radically different way. I made the decision then, and have held to it since, that I was not going to do so. When Paul VI treated Cardinal Mindszenty and Archbishop Lefebvre as potential enemies to the post-V2 Church (politically on the one hand, liturgically and doctrinally on the other) I was deeply ashamed.

Yes, I know Montini died in the full knowledge that his actions had had appalling consequences, and I pray for his soul - but he was the worst pope in 300 years and his beatification is a cynical act.

I think the meal aspect can be overplayed and confuse people to think it is like brunch.

Of course, we know that in families, everybody hangs out in the kitchen...

PI hasn't prepared the various types of tripe, certain fish that stink up the entire house and the oil veneer that is left by good Italian cooking, not to mention southern cooking, on everything. He's never butchered live lobsters in his kitchen or dispatched chickens and pigs and other things.

Our kitchen was too small and not an open concept so we only hung out there to work.

Hey Father would you make me a casserole?

Cameron, FrAJM is a cook, not a magician.