AND SO THERE IS A GAY LOBBY, WHAT POPE FRANCIS DESCRIBES AS NOT GOOD, AS BAD! 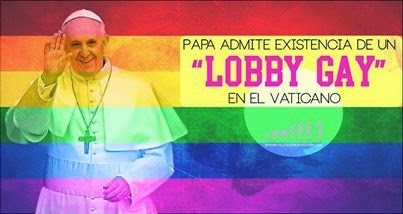 When Pope Francis exclaimed if a gay person is seeking the Lord, "who am I to judge" the papal remarks put the international press into a frenzy. Headlines across the world announced a revolution in Roman Catholic moral teaching, a changed position on homosexuality, or at least an historic “new openness” on the issue of homosexuality.

Predictably, a closer look reveals a more complicated and far less revolutionary reality. Pope Francis did not change or modify one sentence of Catholic moral teaching. The official Catechism of the Catholic Church states that homosexuality is “objectively disordered.” The Catholic Church and this Catholic Pope are not reluctant to offer a moral judgment when it comes to homosexual behaviors.

The Catholic Church offers a long tradition of consistent moral judgment on the issue of homosexual acts, and the church declares them to be “objectively disordered” and sinful. That did not change.

So, what did the Pope say? In the context of his larger remarks on homosexuality and the priesthood, Francis was attempting to explain that a homosexual “lobby” within his church is entirely unacceptable. The Vatican has been reeling from a report issued under Pope Benedict XVI that identified a “gay lobby” with inordinate power and influence within the church. Francis told the reporters that he saw gay individuals as distinct from a gay lobby. “I think that when we encounter a gay person, we must make the distinction between the fact of a person being gay and the fact of a lobby, because lobbies are not good. They are bad.”

What Pope Francis actually said is what the Church has always said but phrased in a different way. We are to love the sinner but hate the sin. Gay lobbies make no distinction between the sinner and the sin and promote an ideology of sinlessness of the person who is actively gay. And now we learn that the gay lobby in our Catholic schools is very real and they have placed it into writing with the former employee of Mt. de Sales Academy clearly a part of that lobby:

WASHINGTON – The Human Rights Campaign (HRC), the nation’s largest lesbian, gay, bisexual and transgender (LGBT) civil rights organization, today delivered a letter to the Vatican on behalf of 9 teachers who have lost their jobs at Catholics Schools for either being LGBT, or supporting an LGBT family member.
Last month, the Archdiocese of Cincinnati took anti-LGBT to a new level, calling not only for the firing of gay and lesbian school employees, but also citing support of the “homosexual lifestyle” as grounds for dismissal.  More than 2,200 educators at 94 parochial schools in the archdiocese have been affected by this new contract.  In April 2014, HRC responded by delivering a petition signed by over 30,000 supporters of the Cincinnati Diocesan school teachers calling on Archbishop Schnurr to remove the discriminatory clause.
Since then, Molly Shumate, who has been a devoted first grade teacher in Cincinnati for 14 years, was forced to resign after being asked to choose between her career as an educator and supporting her own gay son. These draconian laws are designed to force LGBT people back into the closet and silence straight allies.

They have sparked a frightening trend that is being duplicated in Cleveland, Oakland, Hawaii and most recently in Macon, Georgia where just last week Flint Dollar was fired from his position as Band Director at Mount De Sale’s Academy.  Dollar says that he was fired from the Catholic school by President David Held, who cited Dollar’s pending marriage to his male partner of six years as the reason for termination. Mount de Sales students and parents are reportedly planning a sit-in protesting the decision.

Push here for [The letter] signed by the teachers and delivered to the Nuncio  [and signed also by Flint Dollar], or diplomatic representative of the Holy See, reads in part:

“We have devoted years, some of us even decades, to serving our communities as teachers, leaders and role models. We have made a conscious choice to work within the Catholic Church because we strongly believe that a Catholic education prepares our young people to be responsible citizens, men and women for others. For each and every one of us, our employment was far more than just a job – it was a reflection of our core Catholic values.”

Today, a majority of Roman Catholics in the pews and our communities support LGBT equality, as have the millions of fair-minded people who have shown support with their LGBT friends and families.
These teachers are further encouraged by the Pope's increasingly open statements and humbly call for an audience with him:

"We take hope from your messages of acceptance and see in your pastoral leadership the possibility for the Church to correct these hurtful injustices. We ask for a Papal audience with our families, so that you may hear our personal stories firsthand and see the impact the Church’s actions have had on us all."

Dozens of LGBT teachers committed to educating our youth have already lost their jobs in schools across the country. HRC calls on the Vatican to receive and carefully consider this letter to ensure that no more young people are deprived of  a good education and no more teachers are denied employment because of who they are or who they love.

The Human Rights Campaign is America’s largest civil rights organization working to achieve lesbian, gay, bisexual and transgender equality. By inspiring and engaging all Americans, HRC strives to end discrimination against LGBT citizens and realize a nation that achieves fundamental fairness and equality for all.
Posted by Fr. Allan J. McDonald at Thursday, May 29, 2014

“We write to you today with humility to request a Papal audience. With loving eloquence you have explained that the role of the Church is to restore what is broken and unite what has been divided. In this spirit of wholeness and reconciliation, we hope you will agree to meet with us and our families to hear our stories.”


A conversation between these teachers and family members and Pope Francis in which he hears their stories and they hear his story might be a very good thing. It will be very interesting to see what happens, assuming the letter ever gets through to Pope Francis. If it does, perhaps he will call them up on the phone. =)