In these two photos of Mass in the more recent form, Cardinal Cupich celebrates Mass with concelebrants at Chicago’s Saint John Cantius Church facing the congregation. The other photo is of the more recent Mass celebrated by Cardinal Cupich’s now deceased predecessor Cardinal Francis George along with concelebrants. Which of these two photos emphasizes clericalism more than the other? Which one makes the priest too important and distracts from the High Priest they are to “image” at the consecration? 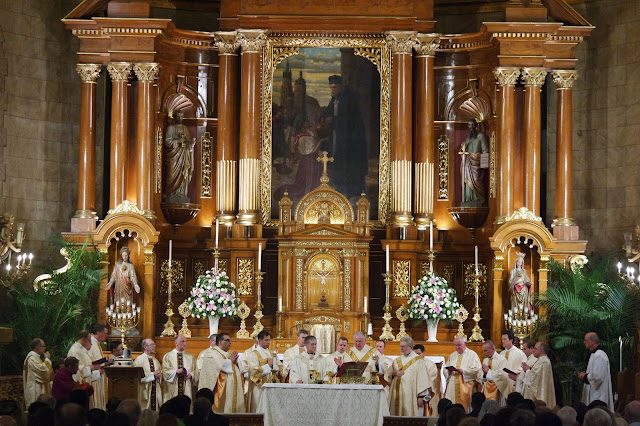 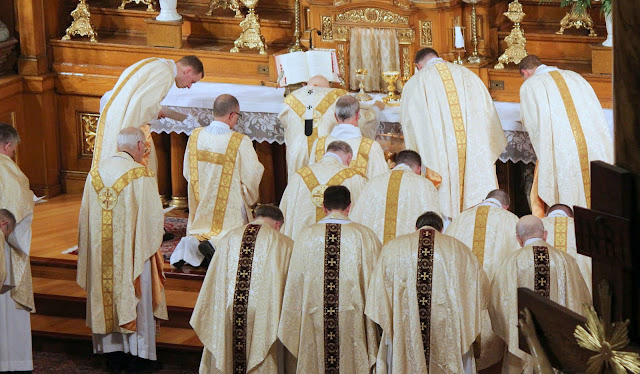 Cardinal Cupich has an article on the Most Holy Eucharist which you can read here at  Commonweal (although he doesn’t use that superlative) which is basically a good article but with some blind spots and irrelevant commentary on private and communal piety as it concerns Exposition of the Most Blessed Sacrament and Adoration of the Most Holy Eucharist, although he doesn’t use these superlatives.

Here he nails it:

Some sixty years after the promulgation of SC, many Catholics neither know their call to active participation in the eucharistic mysteries nor have they made an intentional commitment to it. At best, active participation seems to mean having a particular role to play in the liturgy (greeter, server, lector, Communion minister). The full and conscious participation that means internally joining ourselves to the death and resurrection of the Lord celebrated in the Eucharist seems to have eluded many Catholics.

What His Eminence doesn’t acknowledge and perhaps he doesn’t realize it, is that most Catholics of the progressive ilk don’t worship God although they attend Mass regularly. They worship Vatican II; they worship ecclesiology, they worship synodality. But Cardinal Cupich does get it right in what he does write, they worship activity during Mass, those who are greeters, servers, ushers, lectors, cantors, choir members, Eucharistic ministers and on and on. What they miss is that actual participation as the good Cardinal describes it is “internally joining ourselves to the death and resurrection of the Lord celebrated in the Eucharistic Liturgy” which has eluded these progressives who worship Vatican II and ecclesiology.

At the Ancient Usage Latin Mass there is no such worship of Vatican II, ecclesiology or the various activities of the laity apart from their actual participation in the pews. Not even the human priest is exalted or worshipped, it is the High Priest that is exalted and through Him our worship is directed. The priest joining in facing the same direction as the laity when praying at the altar does more to crush clericalism and the worship of the cult of the look and personality of the human priest more than anything else.

What the good cardinal does not also include and he certainly should have is that today in so many parishes it is the priest and the community that is worshipped, meaning the affective traits or characteristics of both towards expressing warmth, welcome and kumbaya moments.

The good cardinal goes off the rails a bit with criticizing people who participate in Adoration of the Most Blessed Sacrament calling this engagement too personal and private.

CARDINAL CUPICH JUST BE GLAD THEY ARE THERE AND NOT A PART OF THE NONES OR THOSE WHO DON’T MAKE TIME FOR ADORATION BECAUSE EVERYTHING ELSE IS CONSIDERED MORE IMPORTANT! SHEECH!

But overall the good Cardinal’s article is good. I give it a B-.

A priest once told me that the issue with the traditional Church isnt if they accept Vatican II, rather do patrons of the Novus Ordo accept the Church BEFORE Vatican II.

Cupich does not conform to the parish’s practice if it is a traditional and celebrates Mass ad orientem. Like the typical liberal, he forces his taste on them

At NLM (6 September 2014) there is a good article by Gregory DiPippio on concelebration in the Byzantine Rite, comparing it with the modern Roman practice. The two photographs from St John Cantius show an overcrowded sanctuary (actually it's worse in the 'ad orientem' picture).

I understand that the norm for celebration in this church is 'ad orientem', so why is Cupich provided with a temporary forward altar? Is it because of the large number of concelebrants, or is it because H.E. is ideologically opposed to a common orientation?

SJC has been compared to the English Oratories: London and Birmingham founded in the 19th century, Oxford in the 1990s, joined recently by York, Manchester, Bournemouth and Cardiff (Wales). When a bishop celebrates it's usually at the principal Mass in which case it's not just 'ad orientem'; he's expected to sing the Mass in Latin as well.

When the Archbishop of Birmingham celebrates at The Oxford Oratory (he's the local ordinary) he's provided with full pontificals, deacons at the throne, a coped assistant priest and a bugia bearer, and this is the OF! Cardinal Nichols is similarly treated when he ventures into the Brompton Road.

Concelebration is out of the question since most of the above roles are performed by the Fathers. Novus Ordo purists (puritans) would no doubt disapprove, but they are amply catered for elsewhere.

I no longer reside in Chicago, thank God. Yes, Cupich is ideologically opposed to ad orientem celebration. When he was bishop in another diocese he locked out an EF group from the Church they were using for the EF who wanted to celebrate the Easter Triduum in the ancient manner. I am a bit surprised he has not enforced TC. Maybe he is evolving

TJM, When there is clearly a high altar, it looks completely imposed when the Liturgy is done versus populum. It would have been an act of humility from Cupich to simply use the high altar in this case.

Having met him when he was simply Bishop Cupich, he's definitely against Ad Orientem, although to be fair to him, he did not deny me Communion when I knelt.

So Cupich is apparently not a total loon. I think the Canons of St. John Cantius may have opened his eyes a bit. They have enough members now that they are staffing other parishes so perhaps that is the reason he is not as relentlessly anti-tradition as some of the others, like Cardinal DiNardo of Galveston-Houston. Brick by brick as they say.

TJM (The comment was mine, I was logged into the wrong profile), very much brick by brick. I knew Cupich from when I lived in Spokane. I don't think he's the worst Roman bishop in the country, but he's top 10.