OUR “CATHOLIC” PRESIDENT TRANSCENDS DIOCESES AND IS AN INTERNATIONAL LEADER WITH INTERNATIONAL INFLUENCE WHEN IT COMES TO ENABLING THE GENOCIDE OF PRE-BORN CHILDREN AND BISHOPS NEED TO DO MORE THAN WRING THEIR HANDS AND LAMENT WHAT THE POST-VATICAN II CHURCH HAS WROUGHT!

With my title stated and that written, Bishop Biden has two residences in two different dioceses, that of Washington, DC and Wilmington Delaware. Those two bishops, one an Archbishop Cardinal are responsible to the orthodox Catholic community throughout the world to make clear that you cannot consider yourself a Catholic in good standing (or full communion) and hold the political and personal positions that President Biden does when it comes to abortion, in particular the most gruesome partial birth abortion.

If these two bishops don’t act, they will show that the post Vatican II Church is corrupt in fearing the loss of Democrat pro-choice “Catholics” and unable to do anything that has teeth to deal with a Catholic not in good standing who promotes himself as a good pious but flexible Catholic.  What kind of witness is that? That last question is directed to the bishops. 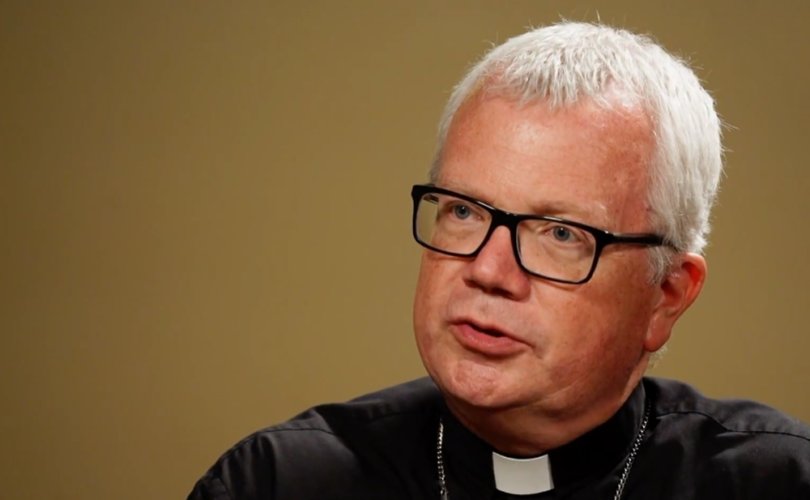 LifeSiteNews
staff
Mon Sep 6, 2021 - 6:27 am EDT
MADISON, Wisconsin – (LifeSiteNews) Most Reverend Donald J. Hying, Catholic bishop of the Diocese of Madison, has described the announcement of U.S. President Joe Biden that he doesn’t believe that human life begins at conception as “painful” and “disturbing.” “People always claimed that President Biden was personally opposed to abortion,” wrote the bishop, “Today, he said, ‘I respect those who believe life begins at the moment of conception, I respect that-don’t agree, but I respect that.’”
READ THE REST THERE
Posted by Fr. Allan J. McDonald at Monday, September 06, 2021

All of these "disturbed" bishops expressing their "concern" about pro abort politicians doesn't mean jack until they use the power they have.

Until they do, all of this blather is just political theater.

Care to guess why they won't?

I suspect many Catholics have given up on the Church over the abortion issue and the bishops' lame words and actions. I know if I were a Catholic teenage girl, I certainly would not take their handwringing over abortion seriously. Words, without action, are meaningless.

The bishops biggest "problem" are the young, faithful, Catholic priests offering the EF. The Horror!

We can only think of such a person as one who already sold all of his integrity. What is left for him now to offer anyone? I would suggest he might still repent and salvage his immortal soul from extreme judgement. As a civic leader he was never very good. He pretended to be a faithful Roman Catholic. Of course, pretend Roman Catholics are in great number in our country and even in the City of Rome, IT itself.

One of the dark sides of pre Vatican II Catholicism and Judaism today and in Jesus public ministry is that outward piety equaled faithful religious observance. While it can, outward piety must be backed up with right practice of good work and tod at y that includes being completely pro life.

Fr McDonald, I respectfully disagree. The average person is now, and has been at least since Christ’s time on earth, of hypocrisy. We sinners are aware of temptation and understand it has an attraction for each of us. What we dislike, and can smell a mile away, is someone pretending it does not affect them or that the sin is not a sin at all because they are in a position of power. It survives and thrives in the post Vatican II environment.

Hey corrupt bishops and priests. We will not forget nor forgive you for this:

"President Joe Biden’s Department of Justice pledged Monday to protect abortion seekers in Texas in the wake of the Supreme Court’s 5-4 decision not to block state law prohibiting abortion after six weeks.

Attorney General Merrick Garland said in a statement that his agency will “protect those seeking to obtain or provide reproductive health services” under a federal law referred to as the Freedom of Access to Clinic Entrances Act."

May these corrupt clerics, unless they repent, never know peace.

there it is again the Orwellian "reproductive health services." I am still waiting for Fr. K to justify this

Biden’s statement is very disappointing. At the very least he needs to explain himself.