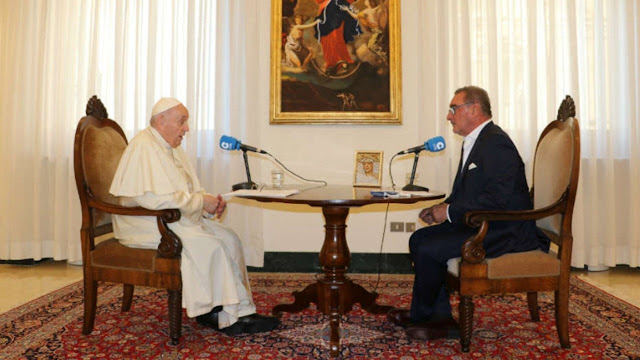 THERE IS A LOT IN THIS INTERVIEW AND PAGES OF POSTS CAN BE WRITTEN ON ALMOST EVERYTHING POPE FRANCIS SAYS. READ THE FULL INTERVIEW HERE, BUT AS FOR TC, READ BELOW my comments. He speaks, though, of priests who want to celebrate the Tridentine Mass as being bi-ritual and needing Vatican approval just as any priest who would want to celebrate a legitimate rite of the Church that is not the one to which he belongs, thus becoming bi-ritual or tri-ritual.

I hate to say this, but every time I read something Pope Francis has written or spoken, off-the-cuff, I scratch my head because his thinking is so convoluted. His answer to the question about the Tridentine Mass is precisely that. It seems he is more open to allowing certain situations to continue while claiming, falsely I believe, that younger priests are wanting to celebrate this Mass for nostalgia. Maybe they want to celebrate it because it makes them feel more priestly is my thought.

There are problems too with the Ordinary Form Mass and its deformations and the nostalgia that so many bishops and priests have for the 1970's as it concerns the "new" Mass. That's a bigger problem in my humble mind.

It seems that at the end of the answer on the Tridentine Mass, the pope either did not complete his statement or Vatican News did not print it.

But here are the questions and answers posed to Pope Francis from a more expansive interview which you can read HERE.

I’m not one to bang on the table, I don’t get it. I’m rather shy. The history of Traditionis custodes is long. When first St. John Paul II—and later Benedict, more clearly with Summorum Pontificum—, gave this possibility of celebrating with the Missal of John XXIII (prior to that of Paul VI, which is post-conciliar) for those who did not feel good with the current liturgy, who had a certain nostalgia... it seemed to me one of the most beautiful and human pastoral things of Benedict XVI, who is a man of exquisite humanity. And so it began. That was the reason.

After three years he said that an evaluation had to be made. An evaluation was made, and it seemed that everything was going well. And it was fine. Ten years passed from that evaluation to the present (that is, thirteen years since the promulgation [of Summorum Pontificum]) and last year we saw with those responsible for Worship and for the Doctrine of the Faith that it was appropriate to make another evaluation of all the bishops of the world. And it was done. It lasted the whole year.

Then the subject was studied and based on that, the concern that appeared the most was that something that was done to help pastorally those who have lived a previous experience was being transformed into ideology. That is, from a pastoral thing to ideology. So, we had to react with clear norms. Clear norms that put a limit to those who had not lived that experience. Because it seemed to be fashionable in some places that young priests would say, “Oh, no, I want...” and maybe they don’t know Latin, they don’t know what it means.

And on the other hand, to support and consolidate Summorum Pontificum. I did more or less the outline, I had it studied and I worked, and I worked a lot, with traditionalist people of good sense. And the result was that pastoral care that must be taken, with some good limits. For example, that the proclamation of the Word be in a language that everyone understands; otherwise it would be like laughing at the Word of God. Little things. But yes, the limit is very clear.

After this motu proprio, a priest who wants to celebrate that is not in the same condition as before—that it was for nostalgia, for desire, &c.— and so he has to ask permission from Rome. A kind of permission for bi-ritualism, which is given only by Rome. [Like] a priest who celebrates in the Eastern Rite and the Latin Rite, he is bi-ritual but with the permission of Rome. That is to say, until today, the previous ones continue but a little bit organized. Moreover, asking that there be a priest who is in charge not only of the liturgy but also of the spiritual life of that community. If you read the letter well and read the Decree well, you will see that it is simply a constructive reordering, with pastoral care and avoiding an excess by those who are not...

Does His Holiness have sleepless nights due to the synodal path that the German Catholic Church has begun?

About that, I allowed myself to send a letter. A letter that I wrote myself in Spanish. It took me a month to do that, between praying and thinking. And I sent it at the right time: the original in Spanish and a translation in German. And there I express everything I feel about the German synod. It is all there.

The German synod’s protest is not a new one... History repeats itself...

Yes, but I wouldn’t get too tragic either. There is no ill will in many bishops with whom I spoke. It is a pastoral desire, but one that perhaps does not take into account some things that I explain in the letter that need to be taken into account.

I always was told Jesuits were deep thinkers and very precise. Not so with PF. His legacy will not be a good one. He obviously does not care much for the 1 out of the 99. With regard to TC the British, French and certain American bishops have shown the way - status quo. They are a acting as shepherds and not branch managers

Pope Francis' notion of a separate Rite for the Usus Antiquior is just fine by me...so long as we get to have our own hierarchy.

Only a man used to dissimulation on a grand scale could argue that TC is in line with SP. To state baldly that the Missal of Paul VI is the sole expression (l'unica espressione) of the lex orandi of the Roman rite is to expound a falsehood that would make Meghan Markle blush.

Notice the usual swipe at the young, in this case young priests. 'Because it seemed fashionable in some places that young priests would say "Oh no, I want ..." and maybe they don't know Latin, they don't know what it means.' Note the vague insinuations 'it seemed' and 'maybe'. I have encountered many priests under the age of 40 who celebrate in the older form, and have not noticed any deficiency in their Latin, which is not always the case with their seniors.

I can date the moment when my attitude to Pope Francis changed from sometimes bemused tolerance to actual contempt. It was his infamous 'dig, dig' remarks to his crony Fr Spadaro in 2016 wherein he suggested that young people attached to the older rite must suffer from 'insecurity or even something else'.

Leaving aside the cod-psychology stigmatizing people whose real motives he couldn't be bothered to ascertain, it demonstrated that he is mean-spirited, ignorant, uncharitable, thoroughly unChristian and utterly unfit for the high office he holds.

TJM mentioned the 'British bishops'. Actually the bishops of England and Wales have a separate conference from their Scottish counterparts. When they return from their summer break they will no doubt issue a collective statement regarding TC. As usual, they will prefer to show a united front, but at present we don't know what their policy will be.

Perhaps a reason his (Pope's) off the cuff or informal comments seen so strange is that he is away from his handlers. He is certainly not as addled as our president but does seem to have a -strong reliance - on others for his more formal pronouncements. Almost makes one wonder who is the unifying voice btwn these two modes of expression.

Pope Francis seems to be obsessed with those he considers as rigid and as fundamentalists as though these two categories of people in the Church are the Church’s main problems. The problem in the Church isn’t with rigidity or fundamentalism but with a loss of Catholic faith and identity even with those who still bother to attend Mass. Yet, nothing about them at all or the super flexible who are like a reed blowing in the wind and can never be pinned down.

Often, thought, the very things that Pope Francis complains about are the things he is most guilty himself, a serious case of projecting on others his own peccadilloes.

I find that people in the Church, be they lay, religious or clergy, who are social justice warriors and bleeding hearts are deep seated problems that have led to do things that make them feel good, like helping the poor. Often the most flexible today were quite rigid in their youth and I suspect Pope Francis was that way before he had some kind of metanoia.

Even his sister in Argentina remarked shortly after his election that she did not recognize the person the pope had become, it was as though he was a different person.

Fr. McDonald, You are being charitable in your analysis of Pope Francis. He definitely uses a straw-man characterization that is strongly associated with certain people in his teaching and discussions. This places people, in this case advocates of the old form of the Mass, in the position of defending themselves without being accused. E.g. “We must defend our children from sex abuse. And those who wear cassocks should be watched closely for their actions.” It is an old Bolshevik method of shaping opinion before the discussion so that ‘those who wear cassocks’ must first and always address their sexual inclinations first and foremost. Even if he does not do this on purpose, it is a very bad habit and extremely uncharitable.

Yes, His Holiness uses psychology to manipulate people. Manipulation is a common trait among many Italians, especially mothers. Take it from one who knows! :) It is a horrible trait for the Supreme Pontiff as well as too much talk by speaking off-the-cuff.

Like me, you have lived through many pontificates, starting with Pius XII. Can you imagine any of us speaking of a Pope like this before this papacy? As much as I did not care for a lot of what Paul VI did, he certainly did not behave in a manner that would elicit this sort of commentary. It is sad and disturbing.