This is the secular press’s take on Pope Francis’ complaining about the polarization His Holiness has created even with His Holiness’ cardinals and other bishops. With all the scandals in the Church and the loss of Catholic full, active and actual participation in the Mass and the Church in general, the Holy Father creates even more fodder for the world to show how inane the Church as become: 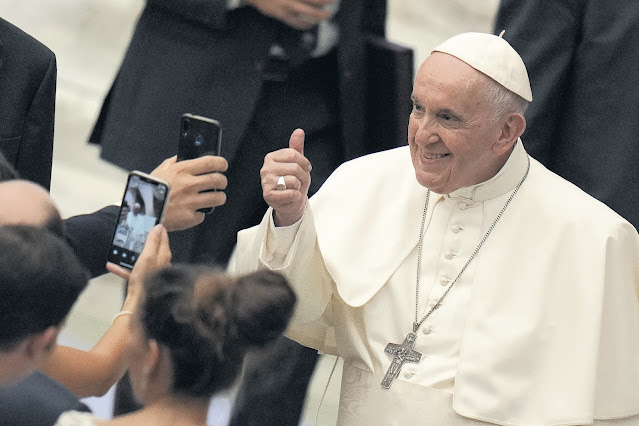 Pope Francis has a message for his haters: “Still alive. Even though some people wanted me dead.”

Hundreds of Italians cheered for him under a Rome hospital balcony this summer. But not everybody was happy he made it out of colon surgery, the pontiff has quipped. Some of his foes held secret meetings about his health.

“I know that there were even meetings between prelates who thought the pope was in a more serious condition than what was being said,” he added in a meeting this month with Jesuits in Slovakia, after someone asked him how he was doing.

“They were preparing the conclave,” he said, referring to a meeting where a new pope is elected. “Patience! Thank God, I am well.”

At 84, the head of the Roman Catholic Church is back at work after spending 10 days at a hospital in July. The colon operation went smoothly, though it did revive questions about whether Francis would stay in his role.

In his eight-year tenure, Francis’s more liberal overtones than the popes before him – from his invitation of LGBT advocates to the Vatican to his calls to welcome refugees – have stirred tensions with conservatives.

The post-op papal joke about bishops wishing him ill marked a frank acknowledgment of the forces within the church who are at odds with him.

One detractor Francis mentioned was “a large Catholic television (network) that constantly gossips” about him.

While he did not name names, Catholic TV network EWTN often features U.S. conservatives who oppose his warnings about climate change and voice anger at his new restrictions on the old Latin Mass.

That article is propaganda. I have not heard people wish the Pope ill over a difference in opinion of the environment or immigration.