PAPAL INTERVIEWS, ANOTHER WOW AND LET ME SCRATCH MY HEAD! 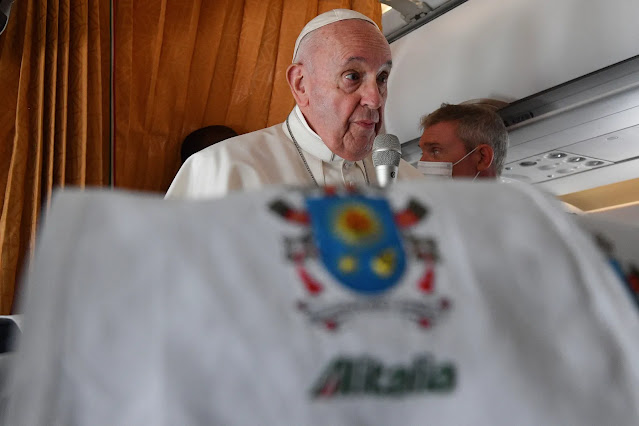 Abortion is homicide and the Pope says look at the science to determine when life begins. Perhaps the Holy Father saw Fr. Fox’s comment on my blog about that?  That was great!

The Sacrament of marriage is for one man and one woman. The Sacrament are instituted by Christ and the Church can’t change them. Schismatic Germans will be disappointed.

If homosexuals want a legal life together, that’s up to the state and thus they can get legal benefits. The pope seems again to endorse civil unions for anyone and I guess that could be multiple people in multiple mock type marriages—no calling this a sin, though.

But more interesting to me is Crux’s report which seems to just report the facts and the National Chismatic Reporter’s report that is highly ideological! I think the schismatic NCR is really fretting over this interview but there is enough to please them too.

What I observe in these two reports is no hint of the Church mission to call people to conversion and thus eternal salvation in Christ through the gifts of grace that lead to right Faith and right good works. Nothing!

The pope seems to elevate pastoral theology to an doctrine, which of course it can’t be. It is very 1970’s. Take it from one who knows as my seminary pioneered in pastoral theology. Pastoral theology is good and much of what the pope says about it is good, but it can also be an enablement of sin that lead the poor soul to damnation. Will the Holy Father be liable to judgement here?

Pope: Abortion is murder, the Church must be close and compassionate, not political

Speaking to journalists on the return flight from Slovakia, Pope Francis talks about his dialogue with Hungarian authorities, anti-Semitism, and vaccines, as well as Holy Communion for politicians who approve abortion laws.
Posted by Fr. Allan J. McDonald at Wednesday, September 15, 2021

Thank you HF for speaking up for life and for making clear that the sacrament of Matrimony is possible only between one man and one woman. Your past remarks on these subjects were not as plainly and clearly reported. Looking forward to hearing you proclaim these truths always what ever the occasion.