BOMBSHELL! POPE FRANCIS APPROVES OF STATUS QUO FOR THE ANCIENT LATIN MASS CELEBRATED ALONG SIDE THE MODERN VERNACULAR MASS IN PARISHES! 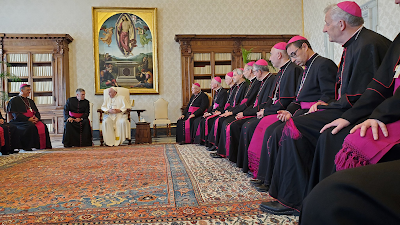 It sees the pope is becoming somewhat more pastoral towards traditionalists as he is toward homosexuals.

This is good news:

Pope Francis insisted during the audience that the key word in his motu proprio is the responsibility of bishops. The Archbishop of Lyon, who wanted to clarify this point, told the Pope that he felt it was important to take into account the specificities of their diocese, in other words, the more or less good relations they have with the "trad" communities, when making decisions. "We know very well that among those who are attached to the Extraordinary Form, there is a risk of separation for some," said Abp. Olivier de Germay. "But this is not the case for all." I said to him, "In Amoris Laetitia, you invite us to take into account the diversity of situations. Here, we should do the same thing." While he expected the pope to confirm this view, the latter, "said he agreed," concludes Abp. de Germay. "He sent us back to our role as bishops, telling us it was up to us to take responsibility."

When asked by Abp. Aupetit if a parish where both forms of the rite were celebrated could continue to exist, the Pope also answered in the affirmative. The Parisian prelate acknowledged that the Pope's "decree" had "put things in order" and had allowed him to realize the existence of clandestine actions in his diocese.

Read the rest at Rorate Caeli:

More Francis on "Traditionis custodes": To a new visiting group of French bishops, Francis says, "Yes, I did it thinking about the USA." (And additional important information.)

Why does he single out the USA? I suspect that like most Latin Americans he sees it as useful scapegoat which diverts attention from the uncomfortable truth that south American countries are economically inefficient and institutionally corrupt.

As an Argentinian it no doubt rankles that the US supported Britain in the Falklands conflict. Yes, that little skirmish was nearly forty years ago, and most people here have forgotten about it, but the Argies haven't.

Incidentally, when Argentina invaded the Falklands in April 1982 Al Haig and Jeane Kirkpatrick were pro-Argentine and Ronald Reagan initially sat on the fence. A strong supporter of Britain was a young Democratic senator, one Joe Biden.