RAISING EXPECTATIONS OF SOME--WILL THESE BE DASHED? AND DISAPPOINTING MANY OTHERS--WILL THE SYNOD SYSTEM MAKE REAL THE VIRTUAL SCHISM THERE IS IN THE CHURCH SINCE VATICAN II? 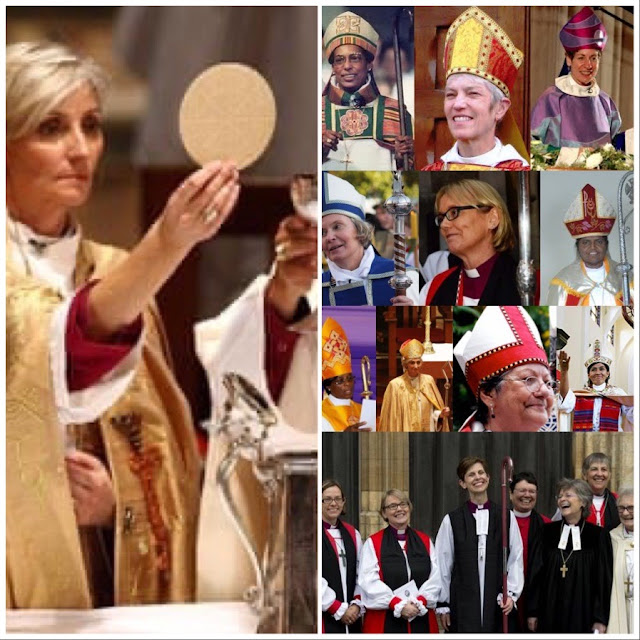 If Germany is any measure, it seems to me that synods which ask laity and clergy for their opinion on this, that and the other will raise false expectations or lead to these expectations being fulfilled and thus alienating another group within the Church which is more organized, more engaged and more hard-nosed.

What will the answer be for questions on women's roles in the Church and inclusivity?

I think Germany gives us the answers, women priests and gender ideology to include recognition of same sex unions all of which have ramifications for the Church's traditional teaching on priesthood, marriage and sexuality which includes prohibitions against fornication, sodomy and adultery.

If the pope goes with the those who want all of these things, there will be a schism.

If he raises hopes only to have them dashed, there won't be a formal schism by progressives, since they are so unorganized and like reeds swaying in the wind, they will simply leave the Church and become something else or nothing at all.

Think about the progressives who were given hope by Paul VI in the 1960's to study in a synodal way the possibility of artificial contraception. That commission recommended some forms of artificial contraception only to have their findings and conclusions trashed by Humanae Vitae in 1968. Why did Pope Paul VI create a commission which would reject Catholic teaching and then tell them thanks but no thanks?

We are in dangerous territory. Who knows what will happen.

In a perceptive analysis of the preparatory document, Ed Condon of Pillar remarks:

Some critics will raise the prospect that the synodal process is set up to produce documents which undermine established teaching and authority in the Church, largely by calling for broad participation in the process, without sufficient guidelines on how to facilitate fruitful engagement within the bounds of Catholic orthodoxy.

In the past people who wanted to have their own way went their own way. But now we have the rebels trying to evict God and his Faith. I am less concerned about this pope than the mob that now rules the Church. They will surely elect another more radical version of Pope Francis and there is little that can be done to stop it since apparatchiks fill the ballot box.

It's as if there is a pretense that a 'study' will give the progressives some sort of warm cozy feeling that implies, "Hey, We looked into it and we found that it's just not the orthodox nor traditional." Therefore the Church doesn't have to appear to be mean old men that says 'no' to everything. It's lip service. However as you say it gives false hope and confusion.

I believe there is a saying about cooking frogs. The advice to the chef is to put the frog in a pot the contains cold water. Then raise the temperature slowly. It seems the frog gets used to the rising temperature and stays calm. By the time it realizes the danger its muscles do not work well and it gets cooked.

Pope Francis is an iconoclast that is itching to do something really big and stupid (heretical). He wants to "reimagine" things, so I think being prepared for a deeper division in the Church makes sense. His Motu Proprio shows us that he believes the enemy of the Faith are the ones who most fervently believe in it and he wants to crush them. We should expect more thermonuclear weapons launched by the non-rigid pope. He's not going away quietly. He's a man with a hammer (and sickle) and he sees nails everywhere.

The very title "Listening to the Faithful" is a combination of irony and self-destructive insanity. The overwhelming majority of Catholics have long since ceased to be "faithful"--and how could they be, since the basic tenets of the faith are rarely taught or preached? And why are they not taught? Because the faithful "shepherds" entrusted with the task of teaching have long since stopped listening to the Magisterium.

There should be an asterisk after that title: Except listening to faithful, believing, traditional Catholics.