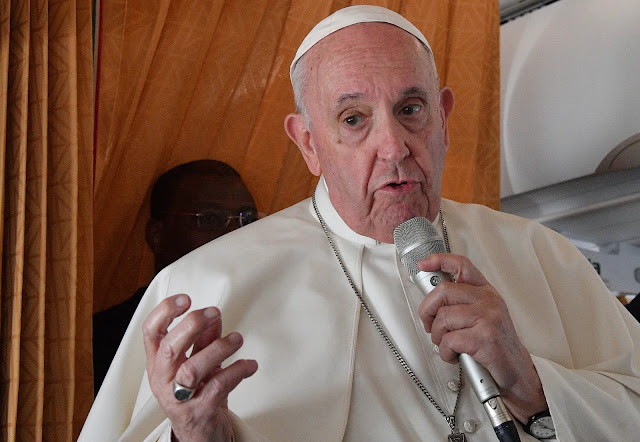 Media critical of the pope do ‘the devil’s work,’ Francis says

In the article I link above, these are the money bytes. Discuss:

ROME – In his conversation with Slovakian Jesuits while visiting the country last week, Pope Francis took a swipe at his media critics, saying he sometimes loses patience with people who insult without knowing the facts.

He also criticized members of the Church who he said are too nostalgic for the past, such as priests who are more attached to the Old Latin Rite of the Mass than they are to their parish communities, which he said is a sign that the Church is going backwards.

During the conversation, one Jesuit noted that people are divided about Pope Francis, with some believing his is heterodox and others idealizing him.

In response to a question from this Jesuit about how he handles people who look at him with suspicion, Francis pointed to “a large Catholic television channel that has no hesitation in continually speaking ill of the pope.”

Although he did not specifically mention which Catholic television network he was referring too, many have interpreted the remark as a jab at American conservative broadcaster EWTN, or the Eternal Word Television Network, which has consistently aired commentary critical of Pope Francis and his decisions.

He noted that there are also many priests “who make nasty comments about me,” saying he sometimes loses patience with these people, “especially when they make judgments without entering into a real dialogue.”

“I can’t do anything there. However, I go on without entering their world of ideas and fantasies. I don’t want to enter it and that’s why I prefer to preach,” he said, noting that some people admonish him for not speaking more about topics such as holiness.

“They say I always talk about social issues and that I’m a communist. Yet I wrote an entire apostolic exhortation on holiness, Gaudete et Exsultate,” he said.

Referring to his decision earlier this year to tighten restrictions on the celebration of the Traditional Latin Mass, Francis voiced hope that this decision will help the Church “return to the true intentions of Benedict XVI and John Paul II.”

Noting that his decision was made after a consultation with bishops from around the world, “there are young people who after a month of ordination go to the bishop to ask for it. This is a phenomenon that indicates that we are going backward.”

To this end, the pope recalled how during a conversation with a cardinal, the cardinal told him that some newly ordained priests had come to him requesting permission to study Latin for the celebration of Mass.

This cardinal, Pope Francis said, made these priests “return to earth.”

Francis said he makes the decisions he does “not because I want to start a revolution. I do what I feel I must do. It takes a lot of patience, prayer and a lot of charity.”

One Jesuit present at the meeting, who is close to Pope Francis’s age, commented that there appear to be a lot of people in the Church who wish to return to the past, or who seek security in the way things were done previously.

Pope Francis agreed with the remark, saying the Church today is suffering from “the ideology of going backward. It is an ideology that colonizes minds. It is a form of ideological colonization.”

This is not so much a universal problem but is rather “specific to the churches of certain countries,” the pope said, though he did not mention which countries he was referring to.

Looking to the past is a means of trying to find security, he said, saying, “It frightens us to celebrate before the people of God who look us in the face and tell us the truth. It frightens us to go forward in pastoral experiences.”

Francis then recalled the discussions during the 2014-2015 Synods of Bishops on the Family, saying it took a lot of work “to make it understood that couples in second unions are not already condemned to hell.”

Referring to the LGBT community, the pope said it also “frightens us to accompany people with sexual diversity.”

“We are afraid of the crossroads and paths that Paul VI spoke of. This is the evil of this moment, namely, to seek the path in rigidity and clericalism, which are two perversions.”

If returning to the past means recovering our Catholic identity as it concerns the Deposit of Faith, as well as the faith and morals of the Church, that count me in. What Pope Francis often describes seems to me a Church that is an NGO and very worldly taking her cues from the world. Pope Francis seems to want to take the path of liberal Protestantism symbolized by what has happened to the Anglican Communion—it has been a dismal failure. Why would the pope want to do this is beyond me.

But we see progressive Catholics trying the same thing over and over again expecting different results from the results they created which has destroyed religious life and left it on life support and chased 90% of Catholics away from the Church so that only 5% to 20% of Catholics actually attend Mass.

And finally, while there is much more I could write, the example the pope gives concerning the Cardinal complaining about newly ordained wanting to learn Latin in order to celebrate the older Mass, His Holiness in fact and unwittingly gives the reason why Latin should be the language of the Liturgy because we are being asked to learn Spanish, Portuguese, Vietnamese and every other language under the sun when all is needed is  Latin Mass with someone to translate Father’s homily into the vernacular of the people.

Common sense seems to elude so many in the hierarchy from the top down.

The Holy Father's comments about media and clerical criticism seem very strange to me.

Does he really mean to say that anyone in Catholic media offering criticism of him is doing the devil's work? There is no basis for such an assertion. There are plenty of things the pope and others in the Church say and do that are legitimately fodder for discussion and disagreement and offering such is no sin, provided it is handled with charity and integrity. It would be very unhealthy for the Church to squelch such criticism.

Speaking as a parish priest, I know very well that lots of my actions, words, decisions and so forth are picked over, and I'd rather have such things aired out openly than have to be shared furtively. Indeed, I prefer people come to me and then I will give my answer; in many cases, my answer may be, "I was wrong."

Now, I have great sympathy for the pope when he says people don't have all the facts. But for example, the pope has not released the collection of data on which he supposedly based his attack on the Traditional Latin Mass; he has not released the text of the deal he made with Communist China, and the report on McCarrick left lots of questions unanswered; other examples of being less than forthcoming can be cited.

The things of which Pope Francis complains are going to happen no matter what, but he could approach things rather differently, and lessen the tension; the choice is his. The impression created by remarks such as these is not positive.

Does all this count as "nasty comments" and "the devil's work"?

Actually, many of his critics are doing God's work, pointing out where this Pope is going off the rails. He really needs psychological help. I have never experienced such an undignified, mean spirited and vindictive Pope, and I have been around since Pius XII.

This HF has been very very unfortunate to follow two exceptional personalities in the Petrine office. Following John Paul and Benedict XVI he was going to have to struggle not seem to be out of place.

Unfortunately, he came to the office when the office required a man of judgement and holiness. He was not the right man for the job. His famous rejoinder to a reporter's question about the troublesome homosexual network in the Vatican (Who am I to judge?) -- even quoted out of context-- soiled his Catholic orthodox credentials. He really never tried to repair the damage. On the contrary, he embraced this theologically dissonant remark in his subsequent behavior.

Refused to answer the 4 Dubia Cardinals. Prayed with/to Pacha-mama. Miss-managed, deliberately or otherwise, the ex-cardinal McCarrick affair, the list is too long and too well-known to go on. Many pray for his conversion. If he knows about these prayers I see him genuinely puzzled about them. As in why would they be needed?

Anthony Stine has opined that the pope has invented a new sin: Holding fast to your beliefs in the face of relentless change. "Rigidity" has about as much credibility as other empty words like "homophobia" or "renewal" or "reform". IT'S ALL B.S..

Using the same rational capacity as an angry 13 year-old, Francis complains that some Catholics want him dead. I can aver, that is simply not true. Most of us want him to convert to the faith he purports to be leading. If he can't do that, most of us wish something--anything--would sideline him before he does any more damage. Death? Certainly not--just get this unfortunate pope out of the way.

In conversations with my friends I often refer to the current epoch as "The War on Reality". Francis might well be remembered as the "Anti-Catholic Pope".

John, you left out the betrayal of the faithful Catholics in China (via McCarrick).

He has been quoted repeatedly, especially by his close buddy, the atheist buddy Eugenio Scalfari, making outrageous statements, including the assertion that Jesus was not God until AFTER the resurrection. The brilliance of it is that Scalfari admits that he never takes notes or tapes their conversations, giving the pope plausible deniability (because one a pope makes a heretical statement, he ceases to be pope). But think about it, any journalist who repeatedly misquoted his subjects would soon be shunned by his subjects for their chronic inaccuracies. Not Scalfari! The pope's embrace of this crochety atheist tells us all we need to know.

I don't care what Francis tells us, I am not going to confess any "sin" of being a "rigid Pelagian" for refusing to embrace his disorder.

Interesting that he writes all of the how to be a good liberal Catholic manuals and has the daily duties of pope and he still has time to closely monitor all of the things being said about him around the world. I think I could hear the violin playing as I was reading his persecution story. Funny in his mind he seems to have no allies, only enemies. Maybe he needs to be treated for paranoid schizophrenia.

What all of this reveals is that he knows he has opposition not only from the laity but from cardinals and bishops. I don't know of a time in recent history where a pope is so preoccupied by his opposition and resorting to name calling to kill it, such as the use of psychological terms of rigid. The question for the pope that no one has asked is "Are Catholics not to have a commitment to revealed truth, because commitment means rigidity? It is all so ridiculous.

The fact that this pope throws the cheap shots at his enemies is a reflection of growing up in South America. A European would--at least in former time--would have too much class and self-restraint.