NINE YEARS AGO ON THIS VERY DATE OF EPIPHANY, JANUARY 6TH, POPE BENEDICT XVI CELEBRATED HIS LAST EPIPHANY AS REIGNING POPE AND HIS LAST EPISCOPAL ORDINATION AND THE LAST REENCHANTED PAPAL MASS FOR EPIPHANY—A MORE MODERN, RUSTIC, IMPOVERISHED LOOK WOULD COMMENCE IN A FEW MONTHS…

UPDATE! I forgot, that our St. Joseph Church in Macon choir sang at this Epiphany Mass as they were on a choir tour of Italy! I was unable to go, but our parochial vicar went in my place. How cool is that!

I copy this from “I am fed up with ugly liturgies” facebook page (Viva il Papa Emeritus): 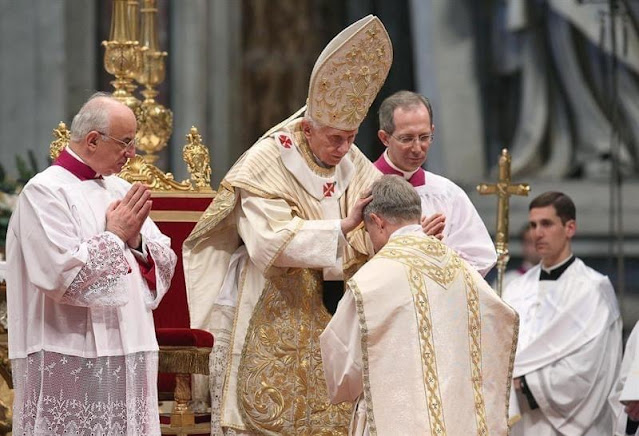 On this day, nine (9) years ago (6 January 2013), Georg Ganswein, Pope Benedict XVI's personal secretary, is ordained Bishop, and assumed the office of the Prefect of the Papal Household, a position he still serves to this day. He was ordained with three other prelates.

• Papal Fanon (which Benedict XVI wore on three occasions only - October 21, 2012, during a canonization Mass; December 24, 2012, on Christmas Eve Mass; and January 6, 2013, on the Solemnity of the Epiphany (I was the first blogger in the world to report and show the return of the papal fanon to a papal Mass on October 12, 2012–progressives went apocalyptic and apoplectic!)

• Roman Chasuble - which was also worn by the concelebrants and ordinands

• Pontifical Dalmatic - for the ordinands (Benedict XVI wore a pontifical dalmatic one last time during the Ash Wednesday Mass, the last ceremony of his pontificate.

what a marvelous experience for the Choir!!! It would have been wonderful if you had been able to go. Maybe nextime!