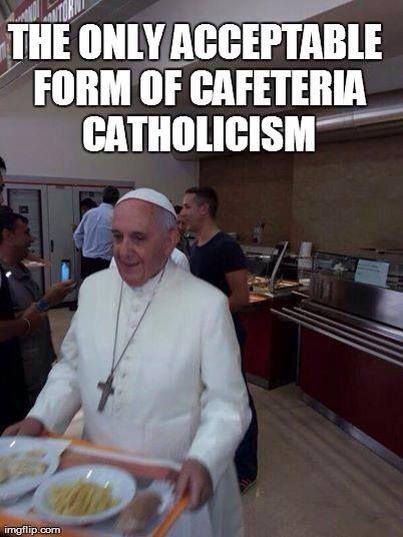 Pope Francis continually states that we must “walk” forward. But in fact, most of his actions are based on nostalgia for the Church in a brief moment of her 2000 year history, the time between 1966 and 1978, although a bit into the 80’s as well, maybe around 1987 or so.

This walking in fact has been in a backwards trajectory not in a forward trajectory and it is from the “me generation” of the 1960’s and the radicals of that era who were culture warriors seeking love-ins, sit-ins and they were concerned about social justice, eliminating poverty and other utopian ideologies that were not bad in and of themselves until these turned to a more communistic or socialistic ideology.

I know what I am writing, as I am a child of the 60’s and went to a very ultra progressive seminary in the late 70’s which taught us then what Pope Francis teaches us now. And it was all in reaction to and contradiction of the bad, old pre-Vatican II Church. It was about the new and improved, the inclusive and the non-clerical Church we can become.

Unfortunately for these innovative warriors of the 60’s and 70’s, Pope Saint John Paul II was elected pope. And even more unfortunate for them, Archbishop Joseph Ratzinger rose high in the Vatican power structure influencing a many generations of post-radical young Catholics. Then he too became pope. And then, the dead of the 60’s were raised up again and some nine years later, they are jack rabbiting to their ultimate goals before their time clock truly ends it all.

The 1980’s saw the children of the “me” generation become more conservative, more capitalistic and even many of the 1960’s generation grew up and joined their children but not all. Many still hang on and long for the days of their youth.

Here are two people included in the article I link below from the online National Catholic Reporter, also know as the Chismatic Reporter. If you want to know what is going on in the Church today from the very top, this article will help you to understand and those who are with the top echelon of the Church trying to impose it on people who might be clueless of their nostalgia for the past.

You will note their age. They are my age. They are giddy that the highest level of the Church is helping them to return to their past and its heady days. But I and others my age are on life support and there’s noting we can do about it except to experience the “me generation’s” delusion that we can control what will happen after we die which is seldom effective.

People who rail against what they don’t like are usually battling that very demon in themselves. Thinks the words “rigidity, fundamentalism, pickled peppered faces” and the other words we have heard the highest human authority in the church use over and over again.

The article I link below is about Dr. Gabriel Moran who died this past October: 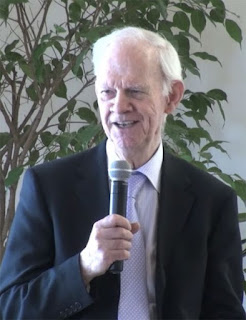 Sister Pat Crowley is the author of the article I link below this photo, press title for her NCR article: 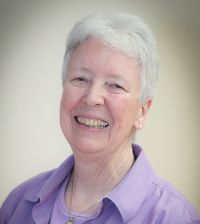 Author contemplates Catholic Church's future by examining its recent past

The heart of this book for me was in Chapter 10 where Moran explores "Presence" and follows with two chapters on community. In Chapter 10, he intricately weaves the notion of Real Presence into the phenomenon of presence in our human relationships.

Moran featured the writings of Richard Rohr, Ilia Delio, Diarmuid O'Murchu and others I have not yet read, and distinguishes between the historical Jesus and the Christ of the Book of Revelation. His work challenges us to understand that unless we recognize that the Resurrection really did make a difference in how God is present to us and in our very lives, we may be simply recollecting what happened some 2,000 years ago.

Here is Dr. Peter Kwasniewski's take on the response to the dubia with regard to TC (the full article is at The New Liturgical Movement):


"Compromised by so many serious errors in ecclesiology, sacramental theology, and liturgical science, marked by pervasive misconceptions and canonical violations, it is impossible to escape the double conclusion that (a) the Responsa are illegitimate and void of binding force, and (b) that the Prefect of the CDW is professionally incompetent and unable to fulfill his grave obligations."

I wonder what John Nolan has to say about the shot taken at Archbishop Roche.

The exact thing that drove me away from the church back in my youth in the late 70's.
An egotistic pastor who demanded that everything was about HIM, all attention all the time. He was caustic and nasty, also very insecure and grasping. Informed us that his transfer to our tiny country parish was beneath his abilities and if he didn't get his way he would close the parish. He burnt our lovely HUGE Christmas creche and put the statues in front of the altar, "the children are looking at the crib when they are supposed to be looking at me" From 1977 to 1985 I went Easter and Christmas and that was it, then met my future wife and she converted, I started to explore my faith, started a blog, now deceased, Was looking forward to the Latin mass starting at my old rural home parish. The lock down started the day the Latin mass was scheduled to start. Now with the year long plus closure and now this crap, I am back to really being ambivalent about church, go sometimes but then i just don't care anymore, we're back to the 70's again