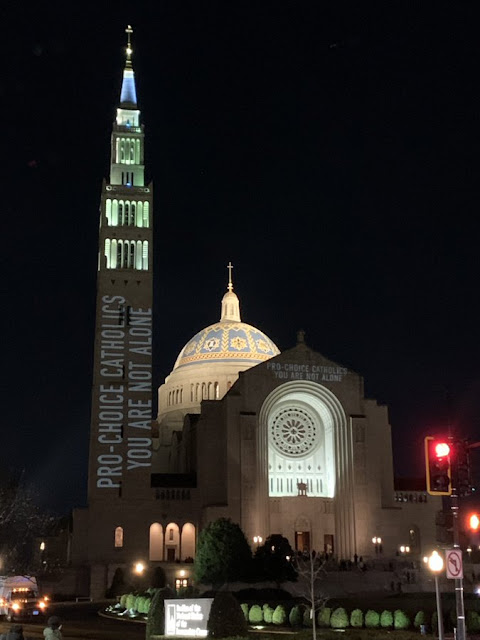 Of course they are not alone, some post here while claiming to be pro life but their voting record tells another story.

When you get in Satan's face, he doesn't go quietly. He fights hard. We have to fight harder!

Bottom line: Support for abortion, in any circumstance, is incompatible with our faith. Too bad our hierarchy is so afraid to say so as a body. Satan has the upper hand within our own church and our leaders are ok with that....ugh!

The hierarchy, as a body, has repeatedly stated that abortion is evil and unacceptbale.

"Fact sheet by the USCCB Committee on Pro-Life Activities - The Catechism of the Catholic Church states: "Since the first century the Church has affirmed the moral evil of every procured abortion. This teaching has not changed and remains unchangeable. Direct abortion, that is to say, abortion willed either as an end or a means, is gravely contrary to the moral law" (No. 2271)."

There are many other similar statements from the hierarchy as a body available on the USCCB website.

Too bad many in the hierarchy vote for a party which perpetuates abortion and forces taxpayers to pay for them even during a pandemic as an “essential healthcare service.” Even Satan can quote scripture

How many of our oh so pro-life bishops were at the March today? They should have been out front, en masse, and leading. The only thing that they excel at is spouting platitudes.

Cardinal Cupich has forbidden his priests to pray outside Abortion Clinics. I guess that would “offend” his party

Fr. Michael J. Kavanaugh said...
The hierarchy, as a body, has repeatedly stated that abortion is evil and unacceptbale.

They are all talk - which “catholic” pol has been excommunicated for supporting abortion very publicly and then takes Holy Communion - yah, yah, yah. Words, without action, are meaningless

MrMatt - My post was in response to Tom Makin who said, falsely, "Too bad our hierarchy is so afraid to say so as a body."

They have. And a cursory glance at any number of statememts from the USCCB or from individual bishops will show that Tom Makin is simply wrong.

I do think it is a valid point that Catholics in public positions of great influence in our country are not censured but instead coddled as though that works with adults and steering them in the correct direction. President Biden has not changed one iota since his meeting with the pope and i would dare say emboldened to stay on the same diabolical path he has been led to be on.

The worst case was a Democratic congressman from Kalifornia, an alleged Catholic, who dared the Church to deny him Holy Communion. By not at least censoring these folks, the Church undermines her teaching authority and leaves an impression that the Church really does not mean what She says

Just saw where Biden’s press secretary said Biden is working on a bill to make it even easier to get an abortion. The USCCB will do nothing and corrupt bishops and priests will still vote for him and his party

A goal of censure or excommunication that must be realizable is the expectation that the person punished will change his/her position or behavior. "At the same time, the threefold goal of canonical penalties is underscored: the restoration of justice, the reform of the offender and the repair of scandal."

Is there a reasonable hope that imposing a penalty on a Catholic politician will lead to a change in that person's behavior or position and "the restoration of justice, the reform of the offender and the repair of scandal." In the case of many Catholic politicians who might be subject to some kind of censure, I would say the answer is no.

If that is the case, you have to consider what value there is in imposing a penalty. I suspect this is the question that many bishops wrestle with. "What will be accomplished by excommunicating Senator Smith?"

If the answer is that the politician will not amend his/her ways and that those Catholic who are calling for this imposition of punishment will feel 1) vindicated and/or 2) better about themselves, then the bishop ought not to proceed.

Although many think it is, this is not a simple, cut-and-dried decision.

We know your sympathies are with the pro abortion party which believes killing the unborn is healthcare. If a bishop excommunicated a politician it would strengthen the Church’s teaching authority and show the Church means what she says that abortion is an intrinsic evil. Joseph Goebbels would have hired you for his staff