AD ORIENTEM FOR THE MODERN MASS—COULD NOT THE POPE AND THE CARDINAL OF CHICAGO, WHO I AM SURE ENCOURAGED POPE FRANCIS IN HIS SEVERE CRACKDOWN ON THE ANTECEDENT MASS, HAVE THROWN OUT A BONE OF COMPROMISE TO SO-CALLED TRADITIONALISTS? 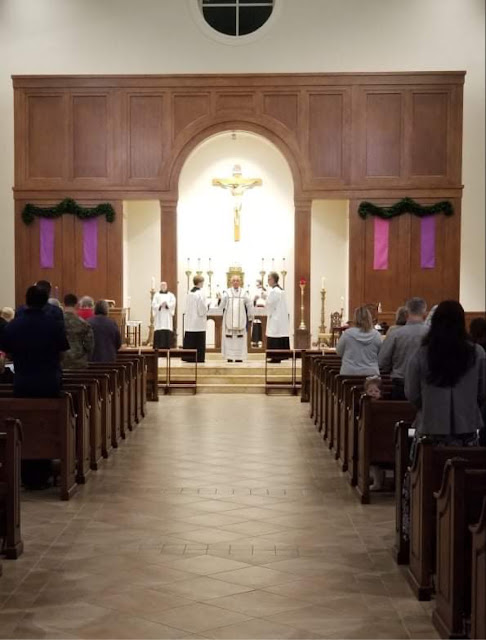 When I was vocation director for the Diocese of Savannah, (1986-1997) I sent college age men to the Josephinum in Columbus, Ohio. Msgr. Blase Cupich was the rector. Thus I had several private conferences with him over the years concerning our seminarians.

Evidently he liked my approach to the seminarians and offered me a non-academic position as “dean of students” for the college seminary. College aged seminarians were not my favorite group of seminarians, but I wanted Bishop Lessard to know that I had been asked, thus I said to Msgr. Cupich that I was interested and that of course I would agree that he request Bishop Lessard to release me to become the dean of students at the college seminary of the Josephinum.

When Bishop Lessard asked me about it and if I wanted to do it, I said, hell no! And then gave my reasons. But at least that letter of request is in my personnel file!

At the Josephinum of that time and due to Msgr. Cupich, a liturgist, the liturgies were very progressive. All the chapels had been wreckovated to emphasize the horizontal in the liturgy not the vertical. The main chapel was horribly wreckovated by him but since then and under our diocesan priest, who became rector there, Msgr. Chris Schreck, it was restored to its original splendor and ethos.

At Mass, no one kneeled, and things were rather “blah” as were the wreckovations.

After this lengthy intro, though, here’s the point of my post:

Now Cardinal Cupich in repressing the “antecedent Mass” in Chicago has indicated that priests/parishes must have his permission for the post Antecedent Mass to be celebrated ad orientem.

Personally, as a pastor, I would not want a parochial vicar to tell me that for his Masses, he would celebrate all of them ad orientem when the norm was facing the people. I would want a compromise and also an endorsement of a compromise from my bishop.

If the Antecedent Mass is to be cruelly suppressed, the implication is that it is now evil and divisive, couldn’t the good Cardinal have encouraged the current pope to throw a bone to traditionalists?

Tell them that one of their Sunday Masses could be ad orientem and with rubrics similar to the Ordinariate’s liturgy. That would have surely shown pastoral solicitude.

But I think Cardinal Cupich hates ad orientem and wants to suppress that too for the post-Antecedent Mass.

All of this is really about control and post-Antecedent liturgists are known to be controlling people. Just read Praytell and some of its posts and you will see.

I think the first mistake is calling Cupich a "good" Cardinal. I see little evidence of it. He is either a useful idiot or worse.

These “liturgists” must not understand the rubrics

'The modern Mass'. In just three words you encapsulate everything that went wrong in the 20th century.

So I have de Mattei’s Second Vatican Council Unwritten History on my desk next to a copy of the Second Vatican Council conciliar and postconciliar documents. I am not trained nor equipped intellectually to truly understand them. But I hope to see some glimpse of what the motivation for it was and how that linked through to the outcome and execution of it that brought us to the actions attributed to it.

Yes, Cupich could have asked to throw the Traditionalists a bone, but that's not going to happen.

Is an Ad Orientem Novus Ordo a realistic option, absolutely! As for "traditional", they all should be however let's not be naive and think all actually are.

Folks, hopefully this mandate won't last forever. As easily as the HF erased Benedict XVI's work is as easily as one of his successors could erase his. Let us pray that a stabilizing papabile exists and is quietly biding his time.

When the Novus Ordo was promulgated in 1969, bringing (it was thought) an end to five years of change and confusion, the bishops of England and Wales recommended that one Sunday Mass and one weekday Mass be celebrated in Latin. Unfortunately the damage had already been done, not least due to their Lordships themselves; in my parish Latin had been eliminated by 1967 and the Mass was an uninspiring 'hymn sandwich'. And I do remember 'Kumbaya' and 'Michael Row the Boat Ashore'.

1969 was the year I went up to university; by my second term I had ceased attending Mass, since the disjunct between my intellectually strengthened Catholicism and the reality of Catholic worship was too great. Most of my Catholic friends felt the same - some actually flirted with Anglicanism.

Fortunately during the 1970s I found that if you shopped around you could find a Latin Mass in the Novus Ordo. Old Rite 'indult' masses were rare. It would have been interesting to see what would have been the result of Summorum Pontificum if it had come out at a time when all Catholics under thirty had been brought up with the old Mass and most priests had been trained to celebrate it.

As for Cardinal Soup-dish (God rot his socks) he has no authority to forbid 'ad orientem' even in his own diocese, any more than he can proscribe the use of Latin. These tin-pot Caesars need to be cut down to size, and if the clergy won't do it, it's up to the laity to do so. Vote with your feet and your dollars.

"Vote with your feet and your dollars."

In the U.S., particularly the Northeast/"Rustbelt", many have. This has resulted in "close and sell" replacing the bake sale, raffle tickets etc. as a source of income as the remaining parishes aren't, in all instances, kicking up enough.

It is very sad. The approach both Francis, Cupich, and their ilk is absolutely counter to the stated purpose of this comprehensive suppression..UNITY. How can there be unity when groups are pitted, one against the other. Just look at the political landscape. This is raw power politics emanating from Rome and heavily influenced on the ground here by Cupich. His record in this regard is well established and very public. There is no question where he stood and stands. The timing of this move is absolutely calculated as well, and was intended to drive the traditional minded into the ground. The juxtaposition of this suppression, with Cupich continuing to allow Father Pfleger to desecrate the altar on a weekly basis, tells us all we need to know. Father Pfleger can bring Lori Lightfoot, Mayor of Chicago, and her "wife" up on the altar during mass while everyone claps but we can't reverence, in a solemn and traditional way that elevates us vertically? PLEASE!! I have had enough of this crowd...the Pope included. I have come to believe, right or not, that Francis is settling old scores like he did while Jesuit Provincial in Argentina. I have said this before and will say it again...Francis is a wolf in sheep's clothing. He is vindictive and very authoritative. He hides behind the "aw shucks" demeanor but is a very angry, convicted man who is all about everything BUT what his real purpose is...leading souls to heaven. Apologies for the rant here but I can't take it anymore.

Yet our “leadership” in the Church is determined to extirpate the most staunch and generous group of Catholics. If Barbara Tuchman were still alive she could add another chapter to her In Praise of Folly to supplement the chapter on the Borgia and Medici Popes!

This brings up an interesting question. In the Cincinnati Archdiocese we are rapidly combining parishes, roughly from 5:1. So far the FSSP still doesn’t have a pairing. There are some, Saint Remy in Russia comes to mind, that had Mass in Latin and a solid and reverent worship. It competes favorably with our Dayton FSSP when people must decide how far they can travel during midwestern winters. It is my understanding of the published funding data from the Archbishop’s office that the Latin Mass communities are disproportionately represented in contributions. Rather than fleeing my contributions perhaps I could make them more obvious by joining them to weakening parishes. Then a pause in the cash flow at strategic points would have more effect. So if I am ever forced to join an NO parish I will do so with energy and financial support while stressing that I am part of a stable and immutable group.