FROM THE FILE: “YOU JUST CAN’T MAKE THIS STUFF UP”

From one pope canceled by another pope: 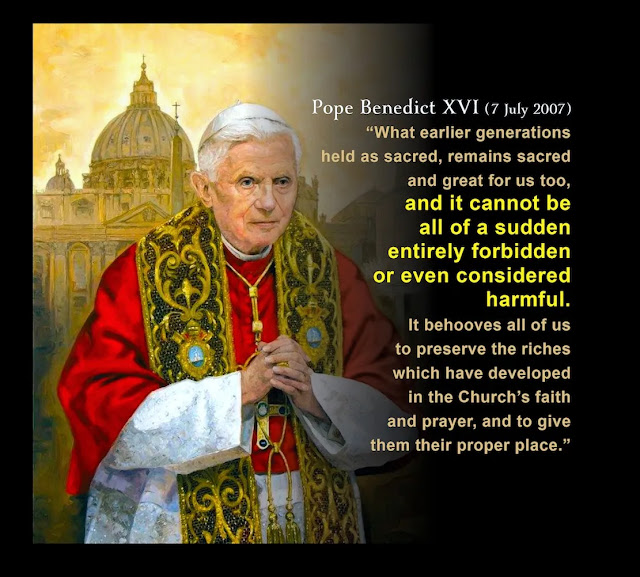 I have written it before and I write it again, you can’t make this stuff up in terms of the inconsistencies of Pope Francis. Is it His Holiness? Or is it His Holiness advisors and speech writers who think illogically and confusedly? Do they not see the implications in terms of logic and consistency when they make statements like this on the heals of something that they have commanded which is exactly what they are condemning in another venue?

Pope Francis on Jan. 10 used his annual address to the Vatican's diplomatic corps to warn against a "cancel culture" mentality, which he said has been "invading many circles and public institutions."

My commentary: The Pope cancels the papacies of Saint Pope John Paul II and the saintly Pope Emeritus Benedict XVI. As it concerns Benedict, the center piece of his papacy was the proper interpretation of Vatican II with the hermeneutic of continuity and his liberalizing access to the older liturgical books of the Catholic Church stating that what previous generations considered holy could not now be held in contempt.

Benedict also promoted liturgical renewal or reform in continuity with what preceded.

All of that has been canceled by Pope Francis. If the Holy Father does not understand how he is the one who has called into question his credibility on so many moral issues, then the pope needs someone like Saint Paul to tell his Holiness.

But, if we take Pope Francis’ speech to diplomats to its logical extension and apply it to what his Holiness said they should do also to the bishops, priests and laity who must resist His Holiness participation in “cancel culture” by ignoring His Holiness and the head of the Congregation for Divine Worship who have initiated a horrible cancel culture concerning Pope Benedict’s Summorum Pontificum! Thank you Pope Francis for your encouragement in this. It is consistent with other inconsistencies in your papacy!

The backward non-logic of this pontificate is so blatant and obvious that there's little more we can add to the litany of complaints. But maybe, just maybe we are looking at this the wrong way. God's permissive will has given us Francis and we can never doubt that God has a long-range goal in permitting this to happen. Again, I will quote Phil Lawler:

"Within the past week I have spoken with a half-dozen other Catholics who, like me, have begun regularly attending the Traditional Latin Mass. In every case, their movement toward the TLM began during the current pontificate. We did not move toward traditionalism because the Trads attacked the Pope; it would be far more accurate to say that we moved in that direction because the Pope attacked us."

Short version: The more that the pope attacks the Traditionalists, the more people are attracted to Tradition.

I said from the beginning that Traditiones Custodes was an admission of defeat cloaked in an authoritative quashing. Francis has had his "day in the sun" and it is setting quickly. I am beginning to think that Francis has done far more to energize and elevate the cause of Traditionalism than any possible harm that could been done to the cause by the alleged "grumpy trad meanies" we keep hearing about who are supposedly to blame for the pope's desperate act. So I'm going to stop complaining and just say:

"Thank you, Your Holiness."