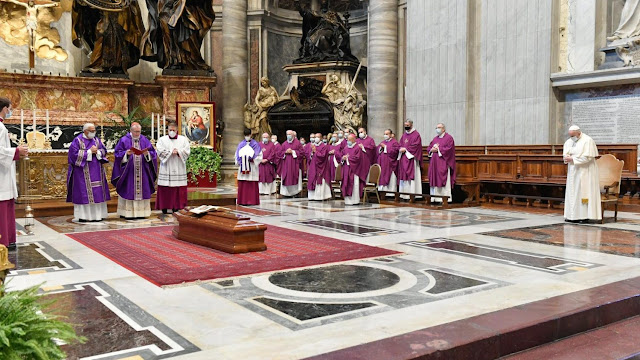 I want to be careful here, because emotions are raw. I did not watch the entire funeral Mass at St. Patrick’s of the fallen police officer. I understand the emotions and outpouring of grief and outrage concerning the lawlessness and disrespect shown to law enforcement today and that this is a political football and I agree with conservative politics on this as my brother was in law enforcement for most of his life and his son, my nephew, is currently in law enforcement and now with the ATF.

But politicized grief doesn’t belong in a Catholic Church or funeral Mass—the politicization of a funeral.

How much better if the Chants in the vernacular from the 1974 Graduale Romanum would have been used—do the Funeral Liturgy the Church has give us in the Ordinary form. How much better not to have any eulogies after the Prayer after Holy Communion which become therapeutic from an emotional and political point of view and completely overwhelm the Holy Sacrifice of the Mass just celebrated.

How much better to have a homily that focuses exclusively on the Paschal Mystery and how the deceased tried to embrace the gifts of Catholicism and salvation offered to him in his short life including seeking to repent and be reconciled to God and the Church.

Eulogies are best offered at the wake and independent of the Vigil Liturgy for the Deceased, given either before or after that liturgical prayer at the funeral home as a part of visitation.

Here is a must read posted at The New Liturgical Movement this morning:

Watching that poor widow air out her grief was pure theater and the Church was entirely wrong to offer her a stage. I don't know what was worse, realizing that no one has taught the modern citizen that you don't broadcast all the intimate details of your sorrows to the world, or cringing every time I heard her attempt to use a past tense interrogative verb that came out as "axed".

I suppose I shouldn't be surprised at all. Between the postconciliar liturgical dumbing-down of the last 50 years and our Oprah-Winifried culture of televised psuedo-therapy, this is now the norm.

JM exactly and you analogy “our Oprah-Winifried culture of televised psuedo-therapy, this is now the norm” is spot-on.

what a poetic description of what I have felt for several years now about the typical NO Mass " liturgies that are, at best, lukewarm soups swallowed out of a spirit of sacrifice, and, at worst, poisons for inner peace and psychological balance."

There are no vernacular chants in the 1974 Graduale Romanum. It does, however, provide a much wider selection of chants for use in the Novus Ordo (eight for the Introit alone). Those who are traditionally-minded enough to want Gregorian chant at a funeral would usually opt for those chants used in the traditional Requiem Mass including the Tract and Sequence 'Dies Irae'. The latter is not in the 1974 Graduale. They would probably prefer the EF where everything is laid out in the Liber Usualis, with no options.

Bishops in the UK and Ireland have intervened to try and curb the excesses which too often accompany OF funeral Masses; but as Jerome Merwick shrewdly points out, the theology underpinning Catholic ritual and prayer for the dead has in most cases been replaced by mawkish sentimentality.

The Anglicans, sadly, have gone down the same route. Admittedly their theology is different, but their funeral rites can be solemn and impressive - witness the obsequies for Lady Thatcher in 2013 and for the Duke of Edinburgh last year.

John, I was thinking of English translations of it such as this: