HOW TO DISCOVER THE “LOOK” OF REVERENCE, AWE AND WONDER IN THE ORDINARY FORM MASS—WHY DOESN’T THE POPE AND THE MAJORITY OF BISHOPS IN UNION WITH HIM GET IT?

Please compare these two photos of the Normative, Post-Antecedent Mass celebrated in the Sistine Chapel two years apart and for the very same feast—what is your innate, non theological, non doctrinal reaction to each Mass, both the very same form? 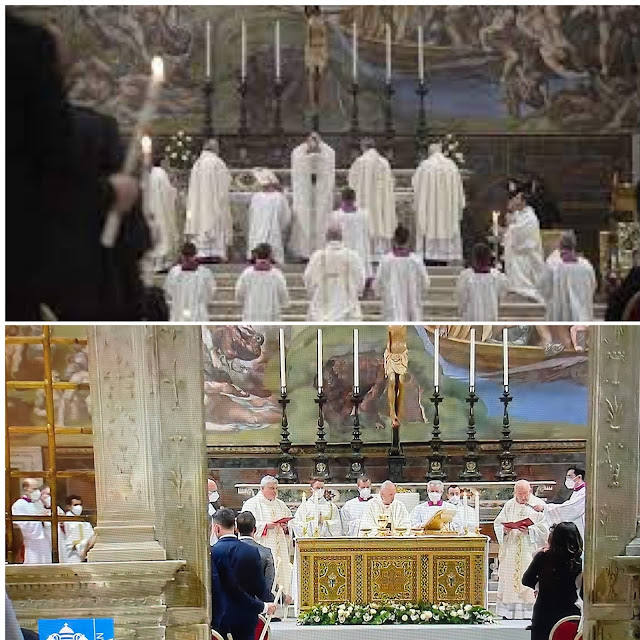 First, we must make it clear, that the Holy Father in celebrating this Mass in two different directions in two years, reads the black, does the read and has long adoration for both very high elevations of the Host and Chalice.

Second, both Masses are valid beyond valid, the Holy Sacrifice of the Mass is present as well as the Real Presence of the Body, Blood, Soul and Divinity of our Risen and Glorified Lord in the most sacramental way possible.

But which one “looks” more beautiful? Obviously this is a subjective evaluation to determine this, or is it?

Which one inspires awe and wonder in the most uncathecized Catholic, or from a well formed or poorly formed Protestant or from an Eastern Orthodox Christian, or from an agnostic and atheist?

Which one would create in the person participating a sense that this direction of the Mass is directed more to God than those in the pews and is more beautiful and pleasing to God, a Gift to God and then God who returns the Greatest Gift to us?

Which one of these two is more “vertical” from the horizontally but vertically oriented congregation and priest, the pope in this case?

Why doesn’t the pope and most of the bishops in union with him get it as well as priests my age and older and a bit younger?

And let’s compare this collage  with the same questions above: 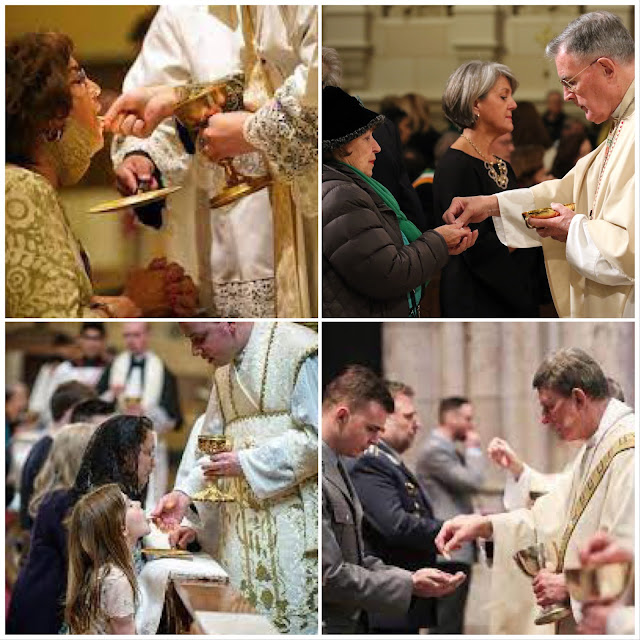 Let’s be clear. The pope and the bishops in union with him know that there is a crisis in Mass attendance in the Ordinary Form throughout the world. Some 5% to 25% of Catholics actually attend Mass.

And those who attend Mass, only a small minority of those attending Catholics actually believe what the Church’s dogmatic teaching is on the Mass both as Sacrifice and a Sacrificial Banquet where Jesus Christ, under the sacramental form of either the Bread and Wine is fully and transubstantially present, Body, Blood, Soul and Divinity, and in the Form of Food which makes receiving our sacramental Real Presence of the Glorified Christ in a palatable way.

Of the photos shown of the distribution of Holy Communion and the direction of the celebration of the very same Mass by the very same Pope, which one promotes authentic belief, devotion and awe and wonder in the Greatest Gift God gives to us, His Son’s Sacrifice and His Son’s Glorified Body, Blood, Soul and Divinity?

Holy Father and Bishops in union with you, we don’t need more words about the true meaning of the Mass and Holy Communion, we need better gestures and common sense from you.

Go ahead, suppress what was considered holy by almost 1,500 years of Tradition, but don’t suppress ad orientem and kneeling for Holy Communion, in fact, make those two gestures the norm and you will see an increase of faith, hope and love in the Church and a powerful tool for evangelization of both non Catholics and Catholics will take off!

Despite my affection (affectation?) for the Old Form it is obvious that form means very little unless it communicates sincere love, respect, and adoration to God. It must be a companied by a valid consecration. I have witnessed beautiful, but otherwise meaningless religious services because they did not have a valid priest from the One True Church.

People will believe our claims of faith by how reverently we address God. These two things reenforce each other.

The one that inspires is the one that appears to be a unified action, not one with a barrier between the one performing the actions and those witnessing those actions. Kneeling is contrary to Eastern worship as we stand and acknowledge the resurrection whenever the Eucharist is involved so, kneeling for communion is simply a respected tradition of the West that has no basis in the East.

Eastern Christian Byzantine worship involves all senses, fluid movements and a fluid exchange between churched individuals and the priest intercessor. One sings responses to the "call" of the priest/deacon, crosses oneself in agreement, bows and receives the blessing of the priest when he turns to address the people. Verses populum is contrary to this type of worship. You will never get an Eastern Christian, either Byzantine or Orthodox, to understand how this is beneficial. While this might have been tried in a very limited, or experimental way within the '60s Byzantine Churches, the thinking is much different now with the sole focus on returning wholly to our traditional practices.

the reason that the modernists will never "get it" is that they have taken what VII set as a goal of the liturgical reforms (active participation) and instead made that the purpose of the Mass. the purpose of the Mass, rightfully, is to offer fitting worship of Almighty God with due reverence and splendor. Individual engagement in that worship is a product of personal Faith, good catechesis, and well executed liturgy.
Increasing a persons roll in executing the liturgy actually decreases their engagement in the actual worship of God. For example when my wife is directing the schola and playing the organ, and I am singing in the schola at our NO parish we will usualy try to attend another Mass(EF if possible) so that we can be free to totally give ourselves to God in the Mass.
The more duties that you assign to the people at Mass the less actual worship will take place.

I would simply say this. In Versus Populo, I feel like I'm watching some sort of meeting as an outsider. It looks secret and presents a scene that says to me "if you aren't at the table, you aren't...at the table". In Ad Orientum everyone is together, everyone is at the meeting, so to speak, and everyone is a part of the experience. This may not be the most articulate way to offer my thinking but I guess, in my opinion, the Versus Populum form actually takes away from the very idea around which it was thought to be better.