WILL THIS PROPHET BE SENT TO SIBERIA TOO?

Are prophet like Cardinals Mueller, Pell and Burke all going to be exiled or is there a papal plan for which they are on the front lines. Pray there is a papal plan! Was Cardinal Ratzinger ever as blunt as Cardinal Mueller in condemning certain bishops. 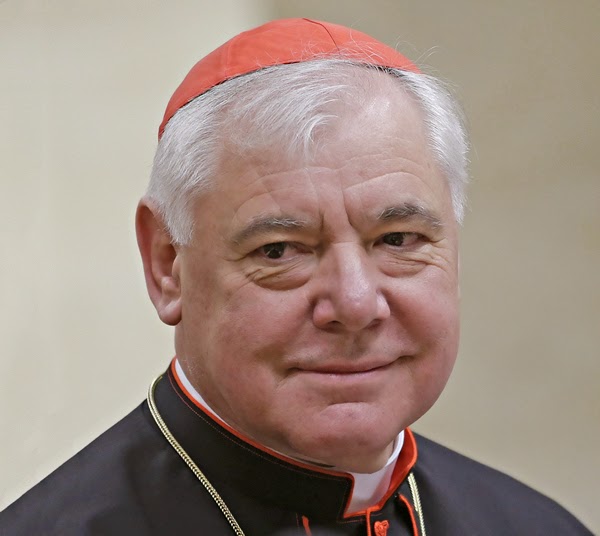 The Vatican's doctrinal chief Cardinal Gerhard Müller says that bishops have been "blinded by secularized society" and are being pulled away from the teachings of the Catholic Church.

The prefect of the Congregation for the Doctrine of the Faith made his comments in an interview with the popular Polish website Nasz Dziennik, according to Breitbart.

He said that "unfortunately, representatives of the Church, including bishops," have been so influenced by secular society that they have been "pulled far from the central question of the faith and the teachings of the Church."

The prefect blamed the media, international organizations, and various governments for the growing crisis in the Catholic faith, saying they had been "sowing confusion in people's minds."

Müller said, "In many countries, relationships are destroyed, and this also applies to the Christian model of marriage and family. The truth of marriage and the family is relativized."

These trends, he said, "have found their way into the church and among the bishops. We have Christ and the Gospel. This is our point of reference, and the foundation for the only correct teaching of the Church."

Müller noted that the Church "has no power to change that which comes from the teaching of Christ," Breitbart reported.

He added, "With respect to marriage, this is primarily defined by the words, 'What God has joined together, man must not divide.'"

The prefect also emphasized the church's policy against gay marriage and homosexuality, noting that "these acts are contrary to the natural law and are sinful."


"Pope Francis has said he is not trying to create some new doctrine for the Church, but he is trying to show that no one is judged by the Church because of their homosexual orientation. No one is trying to discriminate against these people," Müller said.

"But you have to make it clear that the Church considers homosexual acts as sinful."

And Francis is going to open the Vatican's upcoming conference on traditional marriage:

We know it's his job as Prefect of the Congregation for Doctrine and Faith [CDF] to defend Christ's [the Church's] teachings, still it must have taken so much courage for Cardinal Gerhard Müller to critique his fellow Fathers of the Synod [NOT excluding the Pope] for trying to overturn established teachings of the Church.

The Synod is not over. There's a long year ahead which the Pope calls a "maturation period" where he hopes the evil ideas will eventually be approved when the Synod reconvenes.

I hope I'm wrong, but my guesses for the coming year, given that the Pope is so intent on having the immoral items pass, he will banish the courageous Cardinals and stack the Synod with his own effeminate yes-men:
1. Cdl. Burke of course has been banished to the Knights of Malta.
2. Cdl. Muller will be sent packing to Germany.
3. Cdl. Pell will be fired from the G8 papal advisory committee.
4. Abp. Forte [he who inserted the items on cohabitants and homosexual unions in the early Synod document] will take over as prefect of CDF.
5. The heretical "School of Bologna" theological movement will be approved by the Pope.[See Sandro Magister's blog.]
6. The Pope will seek reconciliation with the heretical "Old Catholic" union of Utrecth while continuing to attack traditional Catholics who defend Church doctrine. [See Eponymous Flower site.]

These great men [nos. 1-3] need our prayers. Cardinal Burke recommends we pray the Chaplet of the Holy Face for their intentions.

Have you noticed that Cardinal Muller has a strong physical resemble to Pope Pius X?

Was he right about more than just a prediction of "confusion" to come? Isn't there something worse than mere confusion afoot now?

I didn't use to think so but now, yes, like JBS indicates, I do think that Archbishop Lefebvre did have a prophetic foreknowledge of things to come, but then he was just one of a number of Cardinals and bishops who tried to stem the flow of modernism unleashed at the Second Vatican Council without success. These men, Casper et al, are the real fruits of Vatican II and the problems pointed out at the time are now coming home to roost. The liberality has been warned about for years. As Bishop Schneider points out, we have Council documents that are problematic (designed to be deliberately ambiguous according to Cardinal Casper said), in particular Nostrae Aetate which seems to suggest all religions are equal. That creates a view that, Benedict XVI pointed out again recently, has the effect of undermining the mission of the Church to lead all men to Christ. Otherwise how can we even be termed Christian?

And, if we think about it, the term "graduality", which was coined at the synod, has really been in existence since the Council with things slowly being watered down over the last 50 years or so that now, if things go to plan, undoubtedly it will culminate in the Church's moral teachings being struck down at the next synod.

I think that Catholics everywhere have to resist and make their views known. But of course the powerful weapon we have is prayer, and in particular the rosary. We need to renew our prayer, our rosaries and ourselves, to stop this liberal onslaught that we have unwittingly contributed to through our own laxness in prayer etc. There are a few that don't fall into that category of course, but I am sure the majority of us would agree that we are not praying enough.

I think that the SSPX is looking more and more like the repository of the True Faith.

On another note, this Pope is making all of us de facto sedevacantists.