YIKES, IF THIS IS VATICAN II RENEWAL, YOU CAN KEEP IT!

Bishops, priests and religious my age and older simply will not admit that what happened to the Church after Vatican II has been a disaster, a disintegration that will take a century to repair.

Now there is empirical evidence to pinpoint the disaster and prove why it happened.

This is from Rorate Caeli: 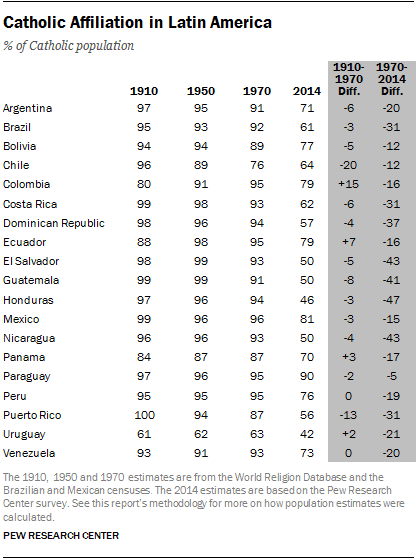 This is perhaps the key quote to understand the report released by the Pew Research Center yesterday on Religion in Latin America (versión en español aquí), which confirms another one released earlier this year by Latinobarómetro:

Historical data suggest that for most of the 20th century, from 1900 through the 1960s, at least 90% of Latin America’s population was Catholic.

What happened exactly in the 1960s?...
The reference is extremely appropriate, so let us try to remember: it is always affirmed by those who say that the collapse in almost all Catholic indicators that followed the Second Vatican Council was a coincidence that the 1960s and 1970s were an era of strong secularization and that the collapse would have happened anyway.
Well, that would explain the collapse in Western Europe, North America, and Australia. But in Latin America (where the current pope studied to be a priest during the 1960s, being ordained in December 1969), what happened instead during the same period was an intense religious revival. But instead of it being channeled through the traditional structures of Catholic life, these same traditional structures were being dismantled by the Latin American hierarchy inebriated with the spirit of aggiornamento, and Latin Americans, who just wanted pure religious life, converted in droves to Protestantism, the only place they could find signs of the Christian message.
In Honduras, the country of the most powerful man in the Roman Curia today after the Pope, Cardinal Rodríguez Maradiaga (who has been a bishop in the capital since 1978, first as auxiliary then as Archbishop), the hierarchy led by him managed the amazing feat of transforming that country in the first Catholic-minority nation in Central America, a vertiginous fall from 94% to 46% in the same period - and the same happened in Uruguay, across the Rio de la Plata from Buenos Aires: 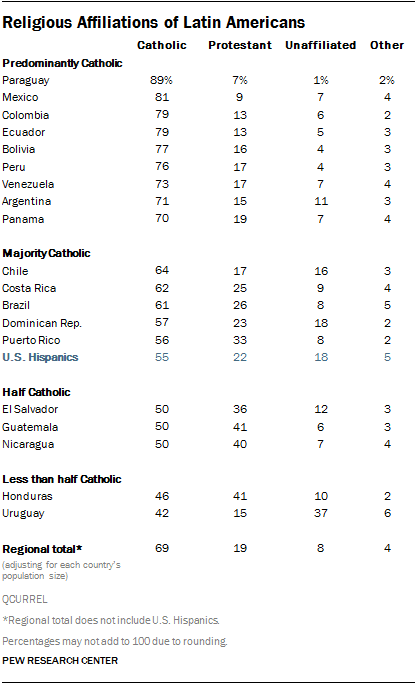 In the aftermath of the Second Vatican Council, whose influence in Latin America was widely and deeply felt by all the faithful in the region since the beginning, in particular by way of radical and immediate liturgical upheaval and of the various "Latin American conference documents" (Medellín, Puebla, Santo Domingo, Aparecida), it can only be said that, as the Latin American Church insisted on a poorly-understood and anti-traditional version of Christian poverty, making what the hierarchy thought would be a "preferential option for the poor," the poor made a preferential option for Protestantism. As the Church abandoned traditional spirituality and worship for mundane politicized concerns and liturgy, many faithful looked for authentic spirituality wherever they could find it. They found it elsewhere.

The Maradiaga Doctrine has been tried and tested, its effect is abysmal, as proved by the clear numbers. The liberal-and-liberation-theology experiment in Latin America did not work. It will not work when applied to the world stage, either, and may even hinder the growth of Catholicism in those few strongly conservative nations, such as those in Africa, where a muscular, morally strong, and orthodox Catholic faith is still spreading out confidently.
Labels: Argentina, Brazil, Francis Effect?, Hispanics in the US, Latin America, Mexico, Statistics, The Bergoglio Pontificate, The Church of Vatican II, Vatican II at 50
Posted by New Catholic at 11/14/2014 05:47:00 PM

If only we had followed the very balanced approach that inspired the constitutions of Vatican II. Perhaps we still can.

Once again, we have an eerie parallel. A certain political party--let's call them the Children of Lyndon B.--decided that America needed to be like other countries and have institutionalized government health coverage. It was sold to us as "low cost" and "available to all"--heck, they even dared to call it the "Affordable Health Care Act"--AND IT'S A DISASTER! Health insurance is more UNAFFORDABLE than ever and it has made things so much worse. It was a proven failure in other countries, but NOOOOOO…we wouldn't listen. Now we are on the verge of being as mediocre in medical treatment and availability as the rest of these "enlightened" nations.

Now we have a "Latin American Style Renewal" in our Church seeking to sell something that, once again, IS A PROVEN FAILURE, to the worldwide Church.

We are so stupid. We refuse to learn. We don't learn. And God, in His gentle mercy, lets us continue blindly down our prideful road until we open our eyes.