THE HOLY SPIRIT, CARDINAL KASPER AND CARDINAL ROBERT SARAH: IS THERE A CONNECTION? YOU CAN BET YOUR BIPPIE! 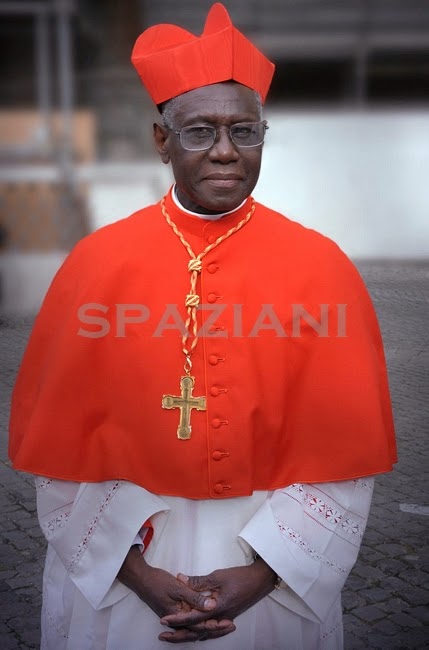 We all know that Cardinal Kasper was defacto the mouthpiece of Pope Francis in floating the ideology that Catholics in a second marriage while still being in a Church recognized first marriage could receive Holy Communion under certain circumstances after a penitential act of some kind.

Then at the Synod on the Marriage the next logical consequence of allowing Catholics in an "institutionalized" form of mortal sin, an adulteress second marriage, would be for those who are living together without the benefit of marriage to receive Holy Communion and for same sex couples even in legal so-called marriages to do the same by legitimizing the ideology of gradualism in a so-called new doctrine of pastoral care.

Then an act of God took place. Cardinal Kasper made racist's remarks to Edward Pentin a reporter saying that Africans have nothing to teach us. It was stunning in and of itself but to add insult to injury Cardinal Kasper lied to the international press and said he had said nothing of any sort until Edward Pentin produced an audio recording proving the Cardinal did say it showing he was not only a racist in this regard but a bald face liar. It was stunning!

Immediately Pope Francis had to distance himself from his mouthpiece. He had to name an African  who was critical of the manipulation of the Synod and evidently with Pope Francis' backing, to a leading position in writing the final agreement that was very conservative.

This whole affair was a turning point for this papacy and high ranking cardinals and not only Americans began to question Pope Francis' style of leadership and the confusion he is sowing in the Church as aging hippies in the Magisterium long for the good old days of the 1970's and are trying to bring it back by making bishops and priests into social workers and the Church into a non-governmental organization (NGO). Folks, that is what was happening in the 1970's and the theology of the priesthood shifted from the cultic to social worker status. The same for the laity's baptismal priesthood too!

Because Pope Francis had aligned himself so closely with a now percieved racist and liar, His Holiness had to distance himself from Kasper and show that His Holiness takes the orthodoxy of Africans seriously. Now in a effort at even greater damage control, His Holiness has named Cardinal Robert Sarah as the only African in the Curia thus far under this pope's pontificate.

Would this have happened without the Holy Spirit revealing the true nature of Cardinal Kasper????Was the Edward Pentin affair only coincidental? I doubt it!

Read also what John Allen wrote about Robert Cardinal Allen prior to the conclave when he had a series of articles in the National Chismatic Reporter (NCR) on the "Papabile of the Day: The Men Who Could Be Pope" by pressing this sentence!

I post Fr. Z's post about Cardinal Sarah as it has links to show that Cardinal Sarah would have none of this making God's priestly people, be they ordained or not, into social workers where authentic worship is regarded as secondary or even non-important:

Pope Francis has appointed Robert Card. Sarah, 69, as the new Prefect of the Congregation for Divine Worship and Discipline of the Sacraments.

Hitherto, Card. Sarah, from Guinea, has been the head of the Pontifical Council “Cor Unum”.
Not long ago, I posted here about Card. Sarah’s remarks concerning the poor.


Cardinal Sarah, citing Benedict XVI, told CNA that “charity is very linked with the proclamation of the Gospel, and doing charity is not only giving food, giving material things, but giving God too. Because the main lack of man is not having God.”

Also, he seems to have seen through the machinations of a certain element active during the recent Synod of Bishops on the family regarding homosexuality.


Cardinal Robert Sarah, president of the Pontifical Council Cor Unum, emphasized to CNA Oct. 16 that “what has been published by the media about homosexual unions is an attempt to push the Church (to change) her doctrine.”
“The Church has never judged homosexual persons, but homosexual behavior and homosexual unions are grave deviations of sexuality,” the cardinal, who is from the west African nation of Guinea, added.

Card. Sarah wasn’t happy about the manipulation of the Synod.  HERE
I think it was precisely this sort of input from Africans that Card. Kasper feared during the Synod.

Your first few paragraphs describing the situation we're in are brilliantly written. Thank you for posting them.

Thank God Sarah doesn't have to appear before a Vatican equivalent of the Senate Judiciary Committee. If he did, he would probably receive the same courtesies shown to Robert Bork.

Acton Institute has actually begun solving poverty not by wealth transfers (socialism) but by the promotion of law and moral order that CREATES wealth.

After all, in 1700 the American colonies were dirt poor. But by 1900 the USA was the world's richest nation all without the benefit of massive NGOs or socialist schemes whereby Europe gave us 'grants'.... we created the wealth on the free market with which to become the super-power we are.

At first I couldn't believe it - but it's true!
It is indeed a miracle of the Holy Spirit that Cardinal Sarah is given the CDW post. What a blessing!
Cardinal Sarah was one of those brave voices who said on the Synod, "What's the use of going to the peripheries if you are not taking Christ to them?"[words to that effect.]
God bless Cardinal Sarah. I will pray for him everyday.

This one brings tears of joy to my eyes. Constant prayers for good vocations are a must. A little fasting helps too.