IS IT TIME TO TAKE A CHILL PILL OR IS OPEN WARFARE WHAT IS REQUIRED OF THE GOOD CARDINAL? 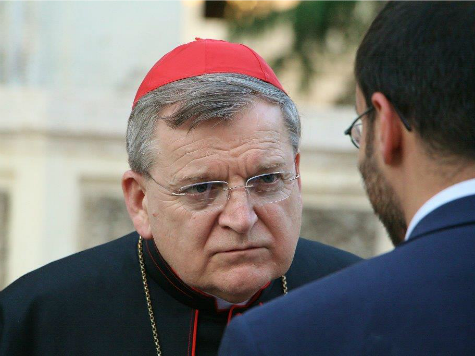 Cardinal Raymond Burke has said he is at the service of Pope Francis, has no personal animosity towards him, and those who claim the American cardinal is an opponent of the Pontiff are trying to discredit him.

The head of the Vatican’s highest court also told Breitbart Tuesday the Catholic Church risks schism if bishops are seen to “go contrary” to the Church’s established and unchangeable dogmas in the months ahead.

The Vatican prelate was speaking in Vienna Tuesday, at the launch of the German translation of Remaining in the Truth of Christ, a book to which he contributed. The work is a response to Cardinal Walter Kasper’s proposal to allow some remarried divorcees to have access to holy Communion. The Catholic Church has always barred such a possibility, based on Christ’s teaching that remarrying after divorce constitutes adultery.

“Certain media simply want to keep portraying me as living my life as an opponent to Pope Francis,” he said. “I am not at all. I’ve been serving him in the Apostolic Signatura and in other ways I continue to serve him.”

The Wisconsin-born prelate was responding to comments he made in an interview he gave the Spanish weekly Vida Nueva last week. The article misconstrued him as criticizing the Pope--despite his stressing in the interview that he was not at odds with Francis.

He told the Spanish publication there is a “strong sense” the Church is like a “ship without a helm, whatever the reason for this may be.” But he made it clear in the interview he was not “speaking out” against the Pontiff. He said the Pope is right to call on Catholics to “go out to the peripheries” but added “we cannot go to the peripheries empty-handed.”

“I wasn’t saying that the Holy Father’s idea is this,” he explained, “but I’ve seen other people using his words to justify a kind of ‘accommodation’ of the faith to the culture which can never be so.”
Burke told Breitbart his wish is “to present the Church’s teaching around which there’s been a great deal of confusion.” He pointed to last month’s synod on the family in Rome as partly to blame, and said those who identify with a “so-called reformist agenda” of Pope Francis are now trying “to discredit what I say by attributing it to some personal animosity toward the Holy Father, and that’s not right.”

Asked about the singer Elton John’s recent praise of Pope Francis as a hero of gay rights, Burke said the Church needs to be “diligent” in explaining "very carefully" her teaching, making proper distinctions between the sinner and the sin. He also reasserted the Pope’s concern for people with same-sex attraction, one which “understands that even though they have this attraction, it is an attraction to disordered acts” and that they need to seek God’s “healing and grace" to deal with their “very profound suffering.”

Burke has been one of the most outspoken opponents of Kasper’s proposal, saying it is not Catholic, threatens the indissolubility of marriage, and is therefore unacceptable. “The Church must do everything she can when, once again, the integrity of marriage is under attack,” he told the Viennese audience.

He said he “often heard” prelates at last month’s two-week Synod on the Family in Rome say that because the culture has changed “so radically,” the Church “cannot teach as we had in the past.” But Burke responded by saying such a view betrays a “loss of hope in Jesus Christ, Who alone is the salvation of the world.” He acknowledged that the culture is “very corrupt” but added that doesn’t mean “we go chasing after it, but rather bring to the culture that which will save it and be full of hope.”

Talk of possible schism has increased in the Catholic Church after the recent synod appeared to be leading the Church in a more “progressive” direction on moral issues. A controversial document issued by bishops midway through the meeting (which Burke called a “total disaster”) pointed to radical changes in the area of homosexuals, divorce, and remarriage among other things, but the proposals were largely toned down or failed to reach a consensus in the final report.

Questioned about whether there is a genuine risk the Church might split, Burke said if, in the runup to a second synod on the family next October, bishops are seen to move “contrary to the constant teaching and practice of the Church, there is a risk because these are unchanging and unchangeable truths.” He also pointed out that the head of the synod of bishops, Cardinal Lorenzo Baldisseri, has “identified himself very strongly” with Kasper’s thesis and “subscribes to that school.”
Warning that this battle will continue, he called on Catholics to “speak up and act.”
Posted by Fr. Allan J. McDonald at Thursday, November 06, 2014

I swear Burke looks like my high school Physics teacher, who had a paddle (made for him by a shop teacher) hanging on his wall. The paddle was engraved with the formula for "force." Maybe we should give Burke a baseball bat with that formula on it.

"...because the culture has changed so radically, the Church cannot teach as we had in the past...”

No, the culture has changed so radically BECAUSE we have not been teaching as we had in the past. This culture is starving for concrete authoritative teachings. The initial penance I was given the other day was "...say the prayers you want to say, do the things you want to do and take some time for yourself..." That is why the culture is starving.

Anonymous, you nailed it!

All I can say is we would be in an even worse mess if it wasn't for Cardinal Burke, and I don't think he can afford to rest or take a chill pill otherwise the liberals will roll over the top. Cardinal Burke is one of the few showing the leadership and true grit that is so badly lacking in the Church at present.

Frankly that statement struck not as much anti-Christ (it is) but as profoundly stupid. Are there Cardinals who think the adultery, sodomy, and abortion are new developments? If so, how do they operate the light switches in their mansions with brains that small?

I'm of two minds on this whole mess.

On the one hand, it's stunning and depressing that nearly 2/3rds of the assembled, hand picked bishops voted for the 'pastoral' changes. If they are truly representative of the whole episcopacy we are in deep, deep trouble.

On the other hand, Pope Francis was elected to stir things up and make major changes and he has 1) completely overhauled the Vatican's finances...2) he now doesn't only have a secret dossier on the gay lobby but people going on the record, in public, as being in favor of this or that 'change'. If he wants to know who is truly Catholic vs. secular, well, we're all being shown who's who and what's what....and that too is a good thing.

Until now, the impression of a monolithic unity (admittedly by Low information Catholics as most of us have known of a silent schism operating for the past 30 years) reigned. Now the reality of de-facto schism on the part of modernists who reject the deposit of faith for the 'deposit of what's happening now' is being ever more clear.

Clarity (purchased at the cost of confusion) is a good thing. Now we know much better who will stand up to the spirit of the world and who are its partisans. Who thinks "the times" can change doctrine rather than thinks the doctrine exists to change the times.

Conservatives generally believe that the Gospel has the power to change the times, to convert the world...whereas "progressives" all claim that it's the inevitable change in the pop culture that we must bow down and worship, it's this external force of public opinion or elite opinion that matters and the Gospel itself must submit to it.

It's counter-intuitive, but the people who believe in genuine revolution are the conservatives, not the so-called "progressives".

So a word of caution to any would-be progressive.... that 'revolution' you are always calling for? Yeah, it's not going to happen the way you think it will.