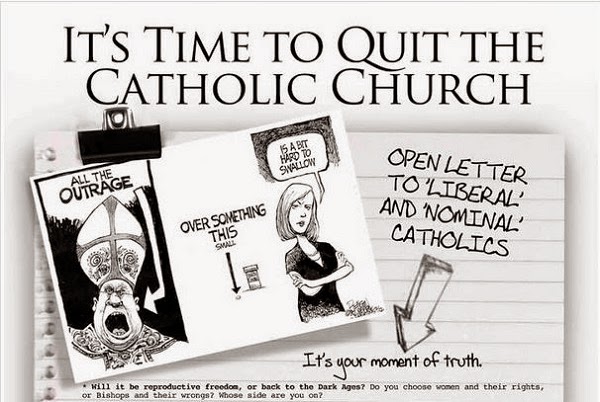 My comments first: In any movement of the Church, there are extremists. The worst of the extremists are found in the progressive side of the Church who are not only progressive, but heterodox and heretical. They pose the greatest threat to the Church and her evangelization because of their corrupt vision of Vatican II and their denial of Tradition.

Those extremists in the Traditionalist movement are heterodox and heretical insofar as they reject the dogmas surrounding the Magisterium of the Church when the pope and bishops in communion with him act to teach in the areas of faith, morals and canon law in an ecumenical council. To reject an ecumenical council (the Eastern Orthodox reject every Ecumenical Council of the Catholic Church since 1054, by the way) is heterodox and it is heretical and it lends itself to schism.

However, the impetus for a small group of ultra-traditionalists to reject the Second Vatican Council comes from its extreme implementation. The Council itself is pastoral and not dogmatic. But changes implemented by the Pope are valid and this is necessary to understand.

However it is not against the new evangelization to ask that the Church revise the reformed order of the Mass and how it is celebrated to make it more like the Extraordinary Form. The Anglican Ordinariate's new Roman Missal does this beautifully not only with the liturgy but with the Roman Calendar while still remaining what Sacrosanctum Concilium authorized.

It is not heretical or against the new evangelization to want and have the Extraordinary Form of the Mass celebrated in places where the requirements for its celebration are met as outlined by Pope Benedict himself.  It is an extreme offense to evangelization in fact not to honor Pope Benedict's guidelines in this regard.

It is not against the new Evangelization to desire that Vatican II be interpreted within the framework of continuity with the Church prior to the Council and not as a rupture in the history of the Church or her trajectory, as Pope Benedict highlighted as a major theme of his papacy.

The article below from Millennial: Young Catholics, An Ancient Faith, A New Century is flawed, prejudicial and ideological and misrepresents the "reform of the reform" movement that the majority of the young actually desire. There are extremists in every movement of the Church, the progressive extremists the most damaging to the Church and her new evangelization, not the traditionalist extremists.

The Latin Mass Is Not the Key to the New Evangelization

October 31, 2014 · by William Bornhoft
In July of 2007, Pope Benedict issued the Apostolic Letter Summorum Pontificum, which allowed priests to celebrate mass in the Tridentine Rite, or the Traditional Latin Mass. Benedict noted that “what was sacred for prior generations, remains sacred and great for us as well, and cannot be suddenly prohibited altogether or even judged harmful.” And thus, a new movement was born.

According to The Week’s Michael Brendan Dougherty, “In 1988, there were 20 regularly scheduled and diocesan-approved Latin Masses in the United States. After Summorum Pontificum, there are now more than 500.”

Summorum Pontificum has also created—unfortunately and unintentionally—a subculture of young Catholics skeptical of contemporary Catholicism and the reforms of Vatican II. They’ve grown to appreciate the Latin Mass and traditional Catholicism, and now feel as though it is the only way mass should be celebrated.

A noticeable number of Millennial Catholics even believe the Ordinary Form (or the Novus Ordo) is actually inferior to the Traditional Latin Mass. These TLM Millennials, as we might call them, are not sedevacantists, nor are they members the Society of St. Pius X. They are far more mainstream. But they are obsessed with tradition (with a little t) and skeptical of liturgical reform, which is to say, they are skeptical of Vatican II, as the liturgical changes of Vatican II are fundamental to understanding everything that came out of the council.

I appreciate TLM Millennials as strong advocates for better adherence to Catholic teaching, whether it’s fasting before mass, showing more reverence towards communion, or engaging in regular confession. But their views on the liturgy, and reform in general, are misguided and threaten to intensify divisions within the Church. Whether they realize it or not, TLM Millennials are not on the side of orthodox Catholicism. They are at odds with the teachings of the Catholic Church.

Sam Guzman, the author of the popular “Catholic Gentleman” blog, is a TLM Millennial. He believes the Ordinary Form is to be blamed for church decline: “Parishes used to be packed with men who saw the mass as something masculine, inspiring, and something worth sacrificing time for. A few decades later, most parish masses are dominated by women.” Setting aside his claims about gender roles in the liturgy, Guzman blames the “Novus Ordo,” poor liturgical music, ad orientem, the lack of Latin, and communion in the hand for making the Catholic mass less appealing to men.

Guzman should realize that his harsh indictment of the Ordinary Form puts him at odds with Church teaching. The liturgical renewal came about after the Church—no longer a primarily European institution existing in the age of medieval Christendom—realized that the Tridentine form made it hard to evangelize and communicate with the modern world. For TLM Millennials, their personal preference for an older form of the mass is overriding the Church’s essential outreach efforts. It shouldn’t come to a surprise to Guzman, given his claimed expertise in this area, that most men may not be interested in attending an hour-long mass in a language they don’t understand.

The consensus on liturgical reform during Vatican II was extremely high. Summorum Pontificum merely allowed the old form to be celebrated, but not compete against the Ordinary Form. But many young Catholics have misunderstood and begun to believe the documents of Vatican II are optional. Perhaps they lack a proper education on the theological reasons for liturgical reform, but instead are drawn in by the bizarre rants of publications like Rorate Caeli and The Remnant.

Some observers see the popularity of the Latin Mass among Millennials as nothing but a fad, but it’s more than that. The same poor catechesis that leads Catholics to misunderstand and oppose the church’s teaching on hot button cultural issues also lead Catholics to oppose the reforms of the past half century. A lack of proper education is at the root of both.

Anyone interested in seeing the Catholic faith thrive in the world, rather than be ignored, should be concerned about a generation of Catholics who oppose reforms that the vast majority of Cardinals supported 50 years ago. There is a place in the Church for the Latin Mass, but those who find it so attractive would be wise to have respect for Vatican II and recognize the opportunities that now exist as we engage in the new evangelization.

William Bornhoft is a recent graduate from the University of Minnesota and currently writes for the Minnesota Catholic Conference.
Posted by Fr. Allan J. McDonald at Saturday, November 01, 2014

Guzman is right. 'TLM Millennials' is just another derogatory term invented by liberals to castigate those who stand in the way of their ongoing revolution. 'Self-absorbed neo-Pelagians' is another. I, for one, take great exception to being so described, and have no respect for those who use these epithets. And I don't care how high in the hierarchy they are.

I would not argue that the Extraordinary Form Mass is THE KEY to the New Evangelization but it has a very important and necessary role in it, nonetheless. I am not alone in this opinion (which is NOT an extreme traditionalist viewpoint).

See Fr. Cipolla's recent article on the synod entitled "Surprise! No Vatican III!" (on Rorate Caeli) where he states:

"But it (the EF Mass) is real, and it is there, and this despite opposition from bishops who are willfully blind to the power of the Traditional Mass (sorry for the terminology, Pater Ignotus . .) and ITS NECESSARY ROLE IN THE NEW EVANGELIZATION of the Church and of the world (emphasis added here)."

Please read this article for a different, but insightful view of the recently concluded synod. I sent it to my pastor and I believe he read it.

And for more on what may have unduly influenced the thinking of certain German synod participants, please read (also on Rorate) "Church of Germany, Church of Simony". I was already aware of the German church tax system and its insidious effect on the German Church (and, by extension, on the whole Church) but those who are not aware should read this.

Since no one doubts that there are competing interpretations of the Vatican II documents, surely it is reasonable to question the clarity of these texts. This reality understandably leads to confusion among various age groups. If they're confused because the documents, and the practices flowing from the documents, are confusing, then who's fault is that?

Where to start? Random reactions:

“A noticeable number of Millennial Catholics even believe the Ordinary Form (or the Novus Ordo) is actually inferior to the Traditional Latin Mass.”

Know anyone with extensive experience in both forms who doubts that the TLM is more reverent and sustains faith better?

“they [TLM millennials] are skeptical of Vatican II”

Vatican II is not on the radar screens of the millennials I’ve run into. They have no memory and little consciousness of it, hardly more than of the Second Council of Constantinople.

“He believes the Ordinary Form is to be blamed for church decline . . . . Guzman blames the Novus Ordo, poor liturgical music, ad orientem [absence of?], the lack of Latin, and communion in the hand for making the Catholic mass less appealing to men.”

Wonder where he came up with these ideas. Maybe he has eyes to see with?

"[T]he Eastern Orthodox reject every Ecumenical Council of the Catholic Church since 1054, by the way."