OKAY, I'M HALF ITALIAN AND THERE IS A LITTLE BIT OF CORRUPTION IN ITALIAN CULTURE, BUT YOU NON ITALIANS DON'T SAY THAT OR WATCHA YOUR BACKA! 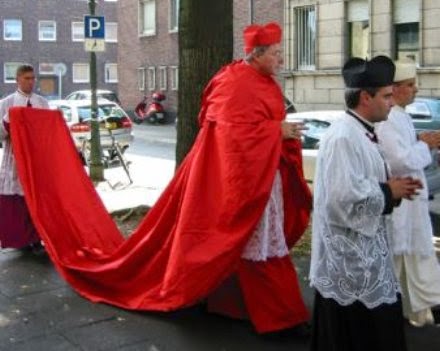 Good news from the Vatican and Cardinal Pell in terms of trying to clean up the Italian mess of corruption at the Vatican bank. Of course there is corruption of this type or another in all cultures, but American culture does strive for transparency in money matters. This has not always been the case though in parishes and dioceses in the USA. Many pastors were trained not to inform the laity of finances. That's a mistake and can lead to a lot, a lot of corruption!  Yes, what John Allen writes in today's CRUX is true and very Italian but it is being addressed by Cardinal Pell through Pope Francis' direction:

By John L. Allen Jr.
Associate editor November 6, 2014
Because Pope Francis is perceived as a maverick, almost everything he says or does is taken as a break with the past even when it clearly isn’t. His rhetoric on the economy, for instance, or his recent comments on evolution, are both utterly consistent with established papal teaching, and yet both have been trumpeted as groundbreaking.

There’s at least one case, however, in which the exact opposite is true – something revolutionary actually is happening, but is rarely perceived as the complete earthquake it actually represents.
It’s the financial reform of the Vatican, launched by Francis and spearheaded by Australian Cardinal George Pell, whose audacious aim is to convert the Vatican from a cautionary tale when it comes to money management into a role model of best practices.

That campaign took another step forward yesterday with release of a new handbook for all Vatican departments prepared by Pell’s Secretariat of the Economy and approved in forma specifica by the pope Oct. 24, meaning it has his personal blessing.

The handbook outlines new procedures to be followed by all Vatican departments beginning Jan. 1, 2015, intended to bring the place in line with international standards of accounting and money management. Among other things, each office will be expected to have an honest annual budget providing a reliable picture of its assets and expenditures.

The handbook also pledges that the Vatican’s consolidated annual financial statement will be reviewed by a major international auditing firm.

While an accompanying letter from Pell and German Cardinal Reinhard Marx, chair of the pope’s Council for the Economy, pledges training and support to help people comply, that offer comes with an edge. The implied message is that a new era is coming, and the options are to get on board or to get steamrolled.

For Anglo-Saxons in particular, for whom transparency and accountability are unquestioned goods akin to mom and apple pie, the temptation is to see all this as a no-brainer, at best as a long overdue and incredibly obvious kind of reform.

That reaction, however, badly underestimates the real drama of what’s happening.
For one thing, it’s almost impossible to overstate how much of a break with the past this represents inside the Vatican, where money management always has been more about personality and patronage than good accounting practice.

In truth, the Vatican’s history of financial scandal is only to a limited extent related to occasional acts of brazen corruption. More often, it’s a product of a culture in which all sorts of objectively suspect behaviors aren’t even seen as problematic — steering contracts to friends or relatives instead of abiding by a competitive bidding process, for instance, or not asking a monsignor where the wads of cash come from that he wants to park in his Vatican bank account.

For many Vatican personnel, especially of a certain age, such shortcuts are simply good manners. They’re what it means to keep things della famiglia, meaning “in the family.”

The new approach under Francis, therefore, is the toughest sort of reform, one designed not simply to change law or policy, but to reshape an entire culture. The idea is not to abandon the sense of intimacy and family spirit that’s always been part of the Vatican’s charm, but to leaven it with a healthy dose of “trust but verify.”

Second, it’s organizational dynamics 101 that if you want to break the grip of an old guard in any bureaucracy, the single best way to do it is to take away their power of the purse.

Traditionally, officials in heavyweight Vatican departments such as the Secretariat of State or the Congregation for the Evangelization of Peoples (better known as Propaganda Fidei) have been able to exercise patronage and influence through the discretion they enjoyed over substantial pools of essentially untracked money, and they were rarely required to account for what they were doing.

In theory, those funds will now be placed under much tighter controls, which should mean that old-guard personalities will be deprived of one of their most powerful weapons in the Vatican’s internal battles.

In other words, the pope’s transparency push is a necessary precondition to every other reform he eventually may want to launch, because if it works, those inclined to get in the way on any other front should have a reduced capacity to mobilize resistance.

The two prelates who signed the letter for the handbook this week, Marx and Pell, would make a political or theological odd couple. Mark was among the leaders of the progressive faction at the recent Synod of Bishops on the family, while Pell was a conservative lion warning of the dangers of “doctrinal backflips.”

Yet when it comes to the need to clean out the stables at the Vatican and to build more accountable, transparent, and efficient systems, Marx and Pell see completely eye-to-eye. They are also in sync with Francis, who realizes he was elected on a good government platform and feels compelled to deliver.

The jury is still out on whether this reform will succeed. In the meantime, however, if you want to see Pope Francis at his most maverick, the financial front is a great place to look
Posted by Fr. Allan J. McDonald at Friday, November 07, 2014

The analysis of how the money management supports corruption and frustrates good works is correct. However, we could find ourselves with a tighter control of funds that will make it even more difficult to correct. It would be best if the movement of money is reviewed for its result as an investment and the people making the investment held responsible for it. Some money work needs to be, must be, very secret to be effective. For example funds that flow into China, Iran, Pakistan, or Russia. Money for institutions and organizations of religious should be far more restricted and should come mostly from the lay supporters as direct contributions without a tax from the bishops or the Church.

The indirect effect of tighter money controls though will be to reduce moral corruption (to a degree) among the clergy and their hangers on.

I say to a degree because there are hundreds of sources of income.

Stories of cardinals who own apartment complexes which house (*among other things) gay brothels or nightclubs abound and present a huge moral and legal liability to the Church and individuals involved...if the powers that be ever want to use that leverage to their advantage.

In reality, we'd be fools to not assume that every intelligence agency on the planet worth its salt has infiltrated, bugged, and otherwise gotten the goods on every gay clergyman and woman religious in Rome. They know what the Church is going to do before the Church does.

...which is why the Holy Spirit raising up people from no where is such a ace card. You can't bug the Holy Spirit or conduct a blackmail op on someone who shows up on no list, no favored status, etc.

It's funny but I get the impression that corrupt clergy think they are hiding their corruption from the hoi poloi (not true) and everyone else when in fact they are known generally by their fruits and interactions.... and the powers that be probably know about it too.