THIS IS REALLY COOL!

I saw this at the Deacon's Bench! Cool, no? 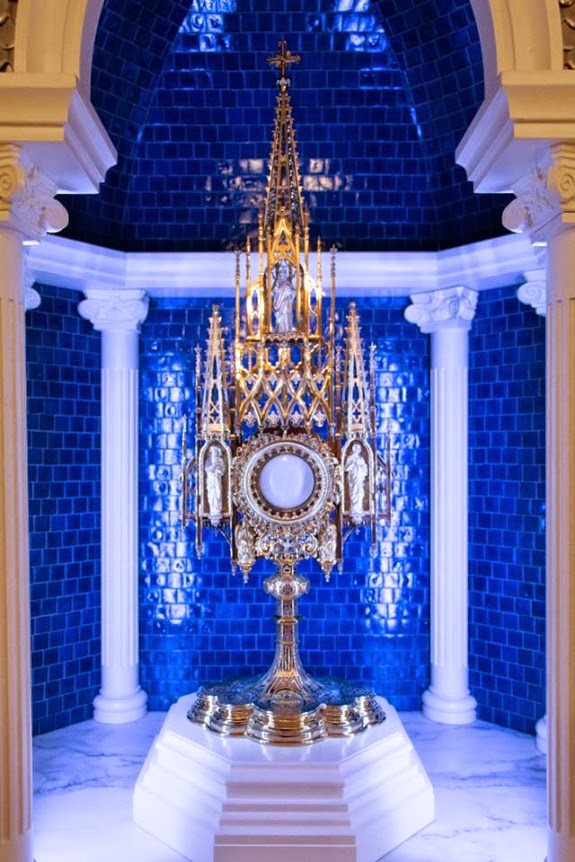 From The Catholic Review in Baltimore:


A man fishing at the Loch Raven Reservoir in north Baltimore County some two decades ago was convinced he had snagged a big fish after his line hooked something substantial.

After reeling in his haul, the angler had no fish. He had, however, caught something even more remarkable: a large Gothic monstrance used by Catholics to hold the Eucharist for worship.

Unsure what the ornate object was, but thinking it looked “churchy,” the man took the monstrance to a local Catholic church. A priest examined the vessel, suggesting that the man take the beautiful brass finding to the Basilica of the National Shrine of the Assumption of the Blessed Virgin Mary in Baltimore, where it subsequently remained in storage for years.

During a joyous Nov. 23 Mass that attracted hundreds of people to the historic basilica, Archbishop William E. Lori placed the consecrated host inside the restored monstrance fished from the water and carried it in a solemn procession to the church’s undercroft.
There, he placed the monstrance atop a gleaming altar inside a new adoration chapel that he dedicated to be used in a special way to pray for vocations to the priesthood and consecrated life.

“Using a monstrance fished out of a lake, we will ask the Lord to send us new ‘fishers of men,’ ” Archbishop Lori said in his homily prior to dedicating the new chapel, “both here in the Archdiocese of Baltimore and in the whole church.”

How the monstrance found its way into the reservoir is a mystery, Archbishop Lori said, “but how it found its way here to the basilica is a remarkable sign of God’s providence.”
Archbishop Lori announced that the new adoration chapel will be dedicated to the basilica’s 24th rector, Monsignor Arthur Valenzano, in gratitude for his “goodness and priestly example.” The surprise announcement stirred the congregation to give the priest a prolonged standing ovation during which Monsignor Valenzano, who is battling cancer, smiled and placed a hand over his heart.

Monsignor Valenzano established a small adoration chapel in the same spot as the new one in 2011. It is located near the tombs of several archbishops of Baltimore, including the nation’s first bishop, Archbishop John Carroll.

The new chapel features an altar inspired by the basilica’s side altars in the upper church.

The adoration chapel altar includes an octagonal baldacchino, a canopy with metal shingles that Archbishop Lori said were set in a pattern inspired by the design of the dome of St. Peter’s Basilica in Vatican City.

“The tiles of blue glass which cover the interior of the baldacchino and serve as a backdrop for the monstrance recall the water of the lake from which the monstrance emerged,” Archbishop Lori said, “and also the words of the Lord to the Apostles, the first fishers of men, to ‘put out into the deep.’ ”

I imagine it was chucked away in the 1970s when Eucharistic adoration was sneeringly referred to by trendy priests and seminary directors in the US as 'cookie worship'.

Is it a gothic style, or is it really a gothic antique? What a story there must be behind it getting tossed in a lake. Someone didn't like a literal reading of John 6 very much!

The sanctuary accoutrements that were tossed out in the 1960's and. 70's would blow your mind. I got to Baltimore's St Mary'sSeminary in. 1976 . It was liberal even for its time. Around 1970 with the new missal, the high altar was completely stripped of its pre Vatican 2 accoutrements and place in a wheel barrow and liturgical carted away! A free standing box with a simple cloth was placed in front of it with earthenware for liturgical use! Maybe all that stuff was dumped in the same lake !

Am I the only one who was reminded of the story of Excalibur?

Maybe it was a blessing that it was tossed in a reservoir, others probably suffered a worse outcome.

Wow. That is some kind of beautiful! Just wow!