LOST IN TRANSLATION (EITHER INTENTIONALLY OR NOT): WHAT CARDINAL BURKE REALLY SAID IN THAT SPANISH INTERVIEW 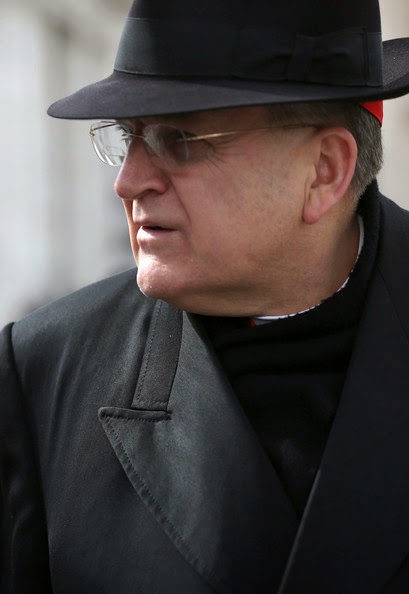 Rorate Caeli posts the actual words of His Eminence, Raymond Cardinal Burke and here it is with even more information:


Cardinal Burke's full interview with Spanish magazine Vida Nueva:
"It seems to many that the Church's ship has lost its compass"

The interview of Cardinal Burke with Spanish Catholic weekly Vida Nueva is now very well-known due to the expression, "a rudderless ship", but taken out of context. Below, you will find the full translation of the interview (we thank Rorate's Spanish-language partners at Adelante la Fe - Rorate en Español for providing us the original text)

"It seems to many that the Church's ship has lost its compass."

US Cardinal Raymond Leo Burke is considered one of the representatives of the Curial sector most resistant to change, as he demonstrates by deeming "critical" the current moment, in which for "many" the Church is sailing "as a ship without a rudder." Opposed to the theses of cardinal Walter Kasper on the admission of the remarried divorced to the sacraments - "marriage is indissoluble. If I marry someone, I cannot live with someone else" - he calls homosexuality "suffering" and he considers that there was an intent to conduct the Synod on the Family towards a position of laxity. He even denounced the "manipulation" that was tried with the information that was released from the synodal assembly, at the same time in which he laments the "confusion" and the "pastoral difficulties" caused by the debate on these hot-button issues. Prefect of the Supreme Tribunal of the Apostolic Signatura, the Vatican Supreme Court, his transferal to the position of cardinal patron of the Order of Malta, an honorific job without any content, is considered certain.

What is the feeling that the Synod left you? Was there confrontation?


There was an open and strong discussion. In the past, the interventions of the Synodal Fathers were always publishd, but not now. All the information came from the summaries of Fr. Lombardi and the conferences he organized with the press. These summaries surprised me, they did not reflect well the content of the discussions, they gave the impression that all was moving in favor of the position exposed by cardinal Kasper.

The real shock came about with the Relatio post disceptationem [the summary of the interventions of the first week of the Synod]. It looked like a manifesto to change the discipline of the Church concerning irregular unions. They offered a greater opening to couples who cohabit without the sacrament of matrimony and to persons who suffer with the homosexual condition.

Indeed. All of us in my Minor Circle were surprised. We spent a lot of time basing the final document in Sacred Scripture and the Magisterium. Errors had to be corrected: for example, the one that positive elements can be found in sinful acts, as cohabitation, adultery, or in sexual acts between persons suffering of the homosexual condition. This confusion was too grave. We made the effort so that the beauty that the matrimonial state as an indissoluble union, that is faithful and destined to procreation created by God, could reemerge. Faced with difficult situations, we distinguish between love for the sinner and hatred for sin. We, the moderators and rapporteurs of the Minor Circles, asked for our works to be published. Until then, the public did not know what we thought. Everything was controlled and manipulated, if I may say so.

Was there an intent to conduct the Synod towards one direction?

Yes. From the moment in which Cardinal Kasper began to present his opinion [Rorate note: in the February consistory], a part of the press interpreted that the Church had the intention to change her discipline. This generated grave pastoral difficulties. Many bishops and priests contacted me saying that persons in irregular unions came to their parishes wanting to receive the sacraments. They said that the Pope wants it. We are not speaking of a minor issue, but a fundamental one. The pillar of the Church is matrimony. If we do not teach and live this truth well, we are lost. We stop being the Church. In the Synod, the teachings of the Church and a position that contradicts them cannot be placed at the same level.

Is the truth on matrimony not taught well anymore?

There is a great confusion on indissolubility. If the person lives in a relationship that is public adultery, how is it possible to approach confession with the resolution to sin no more? How is it possible to accede to communion without scandalizing the community? One of the gravest sins is being lived out publicly.

Don't you view as possible the penitential path proposed by Kasper so that some remarried divorcees aceede to the sacraments?

In this penitential path, the parties must live chastely. If they cannot separate, they must live as brother and sister. This is an ancient practice. They speak of the law of gradualness, but truth is not gradual. It is objective. Matrimony is indissoluble. If I marry someone, I cannot live together with someone else.

Another hot-button issue is that of homosexuals. You mentioned them before as "persons who suffer from a homosexual condition". Do you see it as a malady?

It is a suffering. God did not create us so that man be with man, and woman with woman. This is clear from our very nature. We are made for heteroxual union, for marriage. I refuse to speak of homosexual persons, because nobody identifies by this tendency. It is a person that has this tendency, which is a suffering.

What did it seem to you when the Pope said that who was he to judge a gay person?

Francis spoke in his final message to the Synod of a "hostile rigidity" and he lamented that some close themselves "within what is written" without allowing themselves to be "surprised by God". How do you interpret his words?

Some faithful are concerned with the path that the Church has taken. What do you say to them?

Many have shown me this concern. In such a critical moment, in which there is a strong feeling that the Church is as a ship without a rudder, the reason does not matter; it is more important than ever to study our faith, to have sane spiritual guidance, and to give strong witness of the faith. Some tell me, for instance, that taking part in the pro-life movement is not important anymore. I tell them that it is more important than ever.

Do you see the Church as being in a moment in which there is no one in charge?

I have all the respect for the Petrine Ministry, and I do not want it to appear like I am a voice opposed to the Pope. I would like to be a teacher of the faith, with all my weaknesses, saying the truth that many feel today. They feel a bit of seasickness, because it seems to them that the ship of the Church has lost its compass.. The cause of this disorientation must be put aside. We have the constant tradition of the Church, the teachings, the liturgy, morals. The catechism does not change.

How is this pontificate characterized?

The Pope, rightly, speaks of the need to go to the peripheries. The response of the people has been very warm. But we cannot go to the peripheries emptihanded. We go with the Word of Christ, with the sacraments, with the virtuous life of the Holy Spirit. I don't say that the Pope is doing it, but the risk is there of misinterpreting the encounter with the [prevailing] culture. Faith cannot accomodate itself to the culture, but rather must call it to conversion. We are a countercultural movement, not a popular one.

You said that Evangelii Gaudium is not part of the Magisterium. Why?

The Pope himself says in the beginning of the document that it is not magisterial, that it only offers indications of the direction in which he will take the Church.

Does the average Catholic make this distinction?

No. That is why a careful presentation to the faithful is lacking, explaining the nature and the weight of the document. There are affirmations in Evangelii Gaudium that express the Pope's [personal] thinking. We receive it with respect, but they do not teach an official doctrine.

See, fedora hats are not relegated to only being used as historical costume!

Here the good cardinal is wearing a very appropriate black felt fedora with his black clericals. I have also seen pictures of him wearing a natural straw panama with a black ribbon band for warm weather.

Cardinal Burke is definitely my kind of guy both in terms of substance and in style!