IF THE DOMESTIC CHURCH, THE FAMILY, REALLY DID THEIR JOB, EVEN THE WORST PARISH WOULD PROVIDE STRONG CATHOLICS! 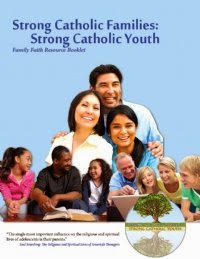 The article I reprint below from the Blog of the Religion section of the Huffington Post hits the nail on the head. My own experience is that Catholic parents who home school their children are more effective as the Domestic Church than those who don't home school. The Church has always taught that parents are the primary educators of their Children and home schooling parents kick the acceptance of this truth up several notches.

Most priests know that a significant number of Catholic parents today are wishy-washy with their children when it comes to the Church, don't practice the Faith and seldom bring their children to Mass. No matter how great the liturgy of the parish, no matter how wonderful the school and the parish's youth and formation programs, if the Catholic Faith isn't kept in the home, keeping the faith as adult Catholics will be hit and miss!

The No. 1 Reason Teens Keeps the Faith as Young Adults

The holy grail for helping youth remain religiously active as young adults has been at home all along: parents.

Mothers and fathers who practice what they preach and preach what they practice are far and away the major influence related to adolescents keeping the faith into their 20s, according to new findings from a landmark study of youth and religion.

Just 1 percent of teens ages 15 to 17 raised by parents who attached little importance to religion were highly religious in their mid-to-late 20s.

In contrast, 82 percent of children raised by parents who talked about faith at home, attached great importance to their beliefs and were active in their congregations were themselves religiously active as young adults, according to data from the latest wave of the National Study of Youth and Religion.

Other factors such as youth ministry or clergy or service projects or religious schools pale in comparison.

"No other conceivable causal influence ... comes remotely close to matching the influence of parents on the religious faith and practices of youth," Smith said in a recent talk sharing the findings at Yale Divinity School. "Parents just dominate."

Several studies have shown that the religious behaviors and attitudes of parents are related to those of their children.

In research using data from the National Longitudinal Study of Adolescent Health, sociologists Christopher Bader and Scott Desmond found that children of parents who believe that religion is very important and display their commitment by attending services are most likely to transmit religiosity to their children.


This is the fourth wave of the NSYR, a comprehensive national study first conducted in 2002-2003 among teens ages 13 to 17 and their parents. These early findings add powerful evidence of the importance of mothers and fathers as the study traces the path of young respondents, who are now ages 24 to 29.

One of the strongest factors associated with older teens keeping their faith as young adults was having parents who talked about religion and spirituality at home, Smith said.

Other key factors included having parents for whom personal faith is important and who demonstrate that faith through attending services. Teens whose parents attended worship with them were especially likely to be religiously active as young adults.

Among related findings, parents from religious traditions that in general promote greater commitment and encourage discussing faith outside the sanctuary also were more likely to have children who remained active in their faith as young adults.

In interviews, many Mainline Protestant parents said they "feel guilty if they think they are doing anything to direct their children toward their religion as opposed to any other possibility. There's a sense of like should you tell your child that what I believe is right," Smith said.

Yet if parents and faith communities are not able to communicate their beliefs, Smith said later, "The game's over, already."

The role of parents is even more critical today as trust in institutions decline and many children with more demanding schedules are spending less time in congregations, Smith noted.

Yet, he said, there are some powerful "cultural scripts" that discourage parents from taking an active role in the spiritual lives of their teens.

• After age 12, the role of parents recedes, and the influence of peers, the media, music and social media take over.

• Cultural messages that encourage parents to turn their children over to "experts." In the case of faith formation, many parents consider that to be the responsibility of clergy, Sunday schools and youth groups, Smith said.

Religious groups can help parents realize their key role in transmitting faith to the next generation by working with them from the births of their children to empower them to take on that responsibility, Smith said.

That includes involving them in congregational activities, making sure pastors and youth ministers work cooperatively with parents and encouraging parents and children to worship together, Smith said.

For their part, parents need to realize a hands-off approach to religion has consequences.
"Parents, for better or worse, are actually the most influential pastors ... of their children," Smith said. "Parents set a kind of glass ceiling of religious commitment, above which their children rarely rise."

David Briggs writes the Ahead of the Trend column for the Association of Religion Data Archives.
Posted by Fr. Allan J. McDonald at Saturday, November 01, 2014

This is one of my biggest struggles with the Catholic Church. I converted 10 years ago from the Episcopal church. When it was just me to worry about I could ignore Fr. Relevant and Sr. Sandals. But now that I have a wife and 2 year old daughter what do I do?

Should I let all of the teaching I do at home be undermined at the local parish? Orthodox Catholic parents become isolated from the average parish for this very reason. It is easier to pass on the faith by teaching your children at home and only going to the parish for mass one hour a week, hoping that dissent, heterodoxy, and liturgical abuses are minimal.

If I went to the local Baptist church down the street do you think I would have to worry about my daughter's faith in Christ being undermined by what she hears from the pulpit or in Sunday school?

I believe the Catholic church possesses the fullness of the Faith. But when it is placed under a bushel or outright rejected by the ones that are in charge, is it better off going somewhere that does not have the full Truth but nonetheless believes in the Bible and Christian morality?

These are very challenging times for Christian parents. We should be able to look for the Church for guidance. For the last 35 years we could point to the Pope as a voice crying out in the wilderness of secularism and relativism against those in the Church who have compromised with the world. Can we do that now? My answer right now is I don't think so.

This would make a good homily (or part of a homily) to be said at every Mass on some Sunday. And repeated with regularity. I think it is to be accepted that given the state of the world today, raising children to be good Catholics can be difficult. Though difficult, is not by any means impossible. Parents must be exhorted to fight the good fight.

"For their part, parents need to realize a hands-off approach to religion has consequences." "Parents, for better or worse, are actually the most influential pastors ... of their children," Smith said. "Parents set a kind of glass ceiling of religious commitment, above which their children rarely rise."

I recall some years back watching a nun being interviewed on EWTN. She recounted a visit to a family that was having family relationship problems. She went to the home, was invited in, and sat down with the children who were watching TV while she waited on the mother. She was appalled at what the children were watching.When the mother came into the room her told her "get rid of the television". She recounted going back weeks later and finding that the TV had indeed been removed and that the relationship among the family members was much improved. The parents and children were talking more with each other and getting along much better.
Parents:"What are you allowing to influence you children?"

Amen, Luke, excellent questions! I wish some holy priests here had answers for you...we will see...

Luke - If you go to the local Baptist Church you will hear nothing of sacraments or the sacrifice of the altar, the popes or Purgatory, the distinction between mortal and venial sin, or the evil of divorce and "remarriage."

You and your children will be held hostage by "Sola Scriptura" and private interpretation. The Baptism of infants will be scoffed at, the canonization of Saints will be laughed at, and the liturgical seasons will be sneered at.

Will you worry about your daughter's faith in a Baptist Church?

Last daughter has been at university for her first semester this year. We visited last weekend and while walking past the beautiful little Church in the small town I asked her how she what she thought of it. She had been 'accused' by our priest at home of being rebellious and a little disrespectful at times. She has a strong will. She told me that she found out how much the traditional Mass had affected her when she saw how many of the other students dressed. she wanted to ask them if they knew where they were. If she stays like that the rest of her education is, as far as I am concerned, a bonus.

Pater Ignatius, I think you may have missed Luke's point. He'd have an expectation that the Baptist parish would actually support Baptist teaching, as opposed what I have seen in Catholic parishes that have no idea how to be Catholic, and spend most of their time trying to be (and failing) something else, even to the point of undermining mere Christianity. I submit that many Catholic Parishes are hostile to orthodox Catholicism, and as a parent who tries to be faithful to the Church, they are not only no help but in fact a detriment to raising Catholic children.

Pater Ignotus says: "If you go to the local Baptist Church you will hear nothing of sacraments or the sacrifice of the altar, the popes or Purgatory, the distinction between mortal and venial sin, or the evil of divorce and 'remarriage.'"

He might not hear that down at the Church that has "Catholic" in its name, either!

Of the various Catholic Churches I attend, the only one in which I have heard those things mentioned is St. Joseph's, but Fr. and his Vicars are a bit out of step. As much as Fr. tries to apologize for the post-Vat II Church, his heart is just not in it. That is great, but his ambivalence is killing me...