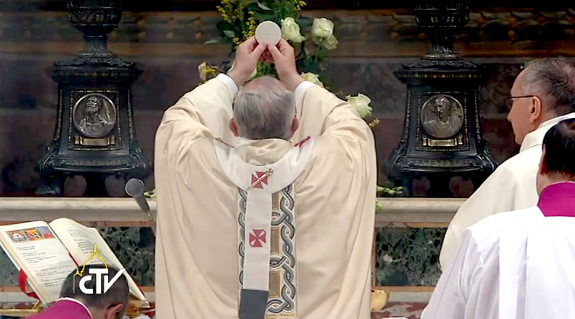 At least that is what Bishop James Conley of Lincoln, Nebraska thinks for the season of Advent, where His Excellency will model at the Cathedral the ancient practice of facing the liturgical east during the celebration of the Liturgy of the Eucharist.

Of course, here at St. Joseph Church at our Ordinary Form 12:10 PM Sunday Mass, we have been doing what both Pope Benedict and Pope Francis have modeled for us in facing East for about three years now.

I hope the good bishop also models hospitality for those who desire to kneel for Holy Communion by providing kneelers for them. I've made it clear in our parish that the general norm for receiving Holy Communion in the USA is to stand but the exception to kneel is the communicant's choice. In other words, both are allowed and the communicant is in the driver's seat and may kneel if s/he so desires to do so.

After I had an expectant mother of 9 months kneel on the hard floor in front of me about three years ago, I began to place a kneeler between me and the communicant. Those who desire to kneel do so and those who desire to stand continue to do so and it is not difficult to give Holy Communion to a standing communicant over the kneeler either when they receive in the hand or the tongue, which of course is their choice too. In other words, it is not divisive for communicants to either stand or kneel, receive on the tongue or in the hand. It is normal at St. Joseph Church.

But here is Bishop James Conley's letter on ad orientem worship at his cathedral during Advent. I pray that it will become the norm at least at one of his cathedral Masses year long and other parishes throughout the world will copy what he models: 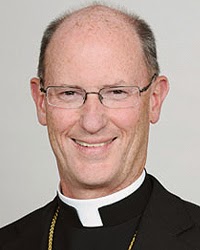 Looking to the east

Jesus Christ will return in glory to the earth.

We do not know when he will return. But Christ promised us that he would return in glory, “as light comes from the east” to bring God’s plan of redemption to its fulfillment.

In 2009, Bishop Edward Slattery, of Tulsa, Okla., wrote that “the dawn of redemption has already broken, but the sun —Christ Himself—has not yet risen in the sky.”

In the early Church, Christians expected that Christ would come soon—any day.  There was hopeful expectation. They were watchful—they looked to the sky in the east to wait for Christ. And because they did not know when he would return, they proclaimed the Gospel with urgency and enthusiasm, hoping to bring the world to salvation before Christ returned.

In the season of Advent, as we recall Christ’s Incarnation at Christmas, we are reminded to be prepared for Christ’s coming. In the Gospel for the First Sunday of Advent this year, Nov. 30, Christ tells us his disciples “to be on the watch.”

“You do not know when the Lord of the house is coming,” Jesus says. “May he not come suddenly and find you sleeping.”

The Mass is rich with symbolism. The vestments of the priest remind us of the dignity of Christ the King. We strike our breasts, and bow our heads, and bend our knees to remember our sinfulness, God’s mercy, and his glory. In the Mass, the ways we stand, and sit, and kneel, remind us of God’s eternal plan for us.

Since ancient times, Christians have faced the east during the Holy Sacrifice of the Mass to remember to keep watch for Christ. Together, the priest and the people faced the east, waiting and watching for Christ. Even in Churches that did not face the east, the priest and people stood together in the Mass, gazing at Christ on the crucifix, on the altar, and in the tabernacle, to recall the importance of watching for his return. The symbolism of the priest and people facing ad orientem—to the east—is an ancient reminder of the coming of Christ.

More recently, it has become common for the priest and the people to face one another during the Holy Sacrifice of the Mass. The priest stands behind the altar as he consecrates the Eucharist, facing the people.  The people see the face of the priest as he prays, and he sees their faces. These positions can have important symbolism too.  They can remind us that we are a community—one body in Christ. And they can remind us that the Eucharist, at the center of the assembly, should also be at the center of our families, and our lives.

But the symbolism of facing together, and awaiting Christ, is rich, time-honored and important. Especially during Advent, as we await the coming of the Lord, facing the east together—even symbolically facing Christ together at the altar and on the crucifix—is a powerful witness to Christ’s imminent return. Today, at a time when it is easy to forget that Christ is coming—and easy to be complacent in our spiritual lives and in the work of evangelization—we need reminders that Christ will come.

In the ad orientem posture at Mass, the priest will not be facing away from the people.  He will be with them—among them, and leading them—facing Christ, and waiting for his return.

You may read the article at its source with comments at the end of the article by readers by pressing this sentence.

Gee I wonder how long it will be before the Vatican conducts a visitation of the bishop's diocese.

Haven't we had enough of (just) "modeling", from even those few bishops who know what to model? How about some clear and unambiguous direction to pull the liturgy out of the ditch? (Yes, I know. So long as bishops conferences hold sway, it's not going to happen.)

It's a shame more bishops weren't doing this when we had a pope who supported it. It could have caught on all over the world. On the other hand, it could be that now confidence in the papacy is so shaken that bishops will start doing things like this without waiting for any sort of direction from the pope.

In many ways, the decadent West is the periphery - the periphery of authentic faith. The Faith needs to be brought to the people as it has always been brought to uncatechised cultures in the far regions of the world - in all its glory and grandeur. This is not indulgent and self-aggrandizing! It is giving due honor and respect to the gift from God that is His sacrifice and imparting a sense of the sacred. Orienting the liturgy toward the East (assuming the church wasn't built north/south), toward God, toward the tabernacle (assuming there is one), makes visible and obvious that verticality in communication, makes visible and obvious that what is happening involves more than just a conversation between the priest and the congregation. I'm one native that needs those obvious signs. This is exciting.

It is hard to believe that Bishop James Conley was a classmate of Pater Ignotus at the Mount. I guess Pater Ignotus must have skipped some of the critical classes on liturgy (and Latin) at the seminary that Bishop Conley probably aced.