Bishop Jame Conley of Lincoln, Nebraska celebrates the Ordinary Form of the Mass in his ultra-modern Cathedral (I think it was built in the late 1960's, but I don't know for sure).  But with the traditional altar accoutrements and the Liturgy of the Eucharist ad orientem in this con-celebrated Ordinary Form Mass, even the modern Risen Christ imposed on the cross, popular in the late 1960's and 70's doesn't look bad.

In fact, the most modern church in the round even, would be vastly improved with the traditional altar arrangement and ad orientem Mass.

I've always thought the stripping of the altar of its tall six candlesticks and central crucifix really made the altar and sanctuary look bare. I hated it the first Sunday I saw it in my home parish in Augusta (without any word from the pastor as to why it what done, btw) in the late 1960's.  It had two small rinky-dink candles on it and the priest's chair behind it in the central place where the tabernacle had been with the tabernacle moved to a side altar. As a young teenager the symbolism of this to me was that the priest had elevated himself to the starring role of the church building and Christ in the tabernacle had been demoted. It was incongruous to me at the time and still is today.

But anyway here is some liturgical eye-candy: 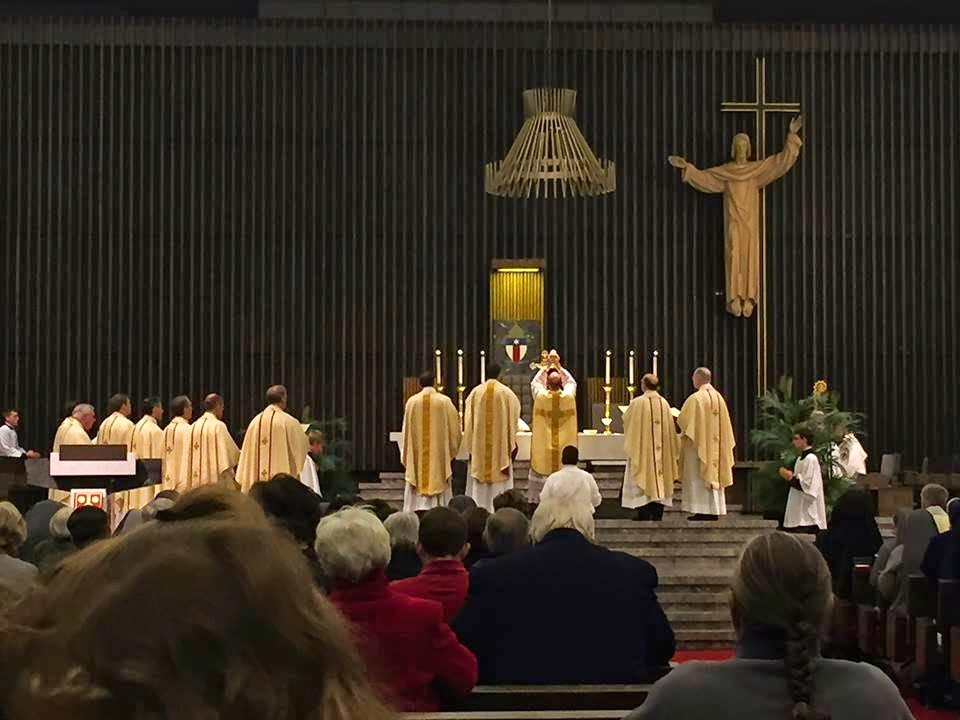 The cathedral is just plain hideous no doubt, no thought put into it at all just leaves you cold anyone could have built that thing. Having said that Bishop Conley had nothing to do with it he inherited it, but he is a wonderful bishop who is friendly to the TLM. Nice Roman fiddle back vestments, crozier and mitre btw.

I've always found it a bit of a contradiction that a diocese like Lincoln, Nebraska should have such an, uh, "interesting" cathedral (speaking in terms of architecture). Lincoln is a bastion of orthodoxy. Lincoln had America's best bishop, the now-retired Fabian Bruskewitz, for years. Lincoln has always been generous with the Traditional Latin Mass, even when it was an indult Mass and required a bishop's permission. Lincoln is a poster-child for vocations, with the highest priest-to layperson ratio in the country. Lincoln is a stone's throw from Denton, where the FSSP Our Lady of Guadalupe Seminary stands and it is often the Bishop of Lincoln who ordains these traditionally-minded young priests. Yet, the cathedral is what it is. While I often rail against the ugliness of modern church architecture, I can see that in places like Lincoln, such buildings DO prove another point: The Church is truly the people of God and we can make do with whatever resources are available. The cathedral was built in the early 1960's, and I have no idea who was behind it, but I commend the bishops who have followed for not allowing the practices of the diocese to reflect the emptiness of their cathedral's architecture.

An interesting WDTPRS comment on this OF Mass at the cathedral in Lincoln, at which numerous TLMs have been celebrated (e.g. pontifical Masses of ordination) and attended by priests and seminarians from the nearby FSSP Our Lady of Guadalupe Seminary (OLGS):

"I had the pleasure of being one of the servers at the Mass, and there was a small contingent of seminarians and priests from OLGS Seminary {FSSP} in Denton in choir: roughly ten seminarians from over there and three priests.
As well, there were ten to fifteen of us from SGGS Seminary [diocesan] in Seward sitting in choir and serving. It was one of the most edifying things I’ve heard/seen in Fraternity-Diocesan interaction when I saw smiles of happiness on the seminarians’ faces after the liturgy, and heard one of the Fraternity priests mentioning to another person in the sacristy that it was the most beautiful liturgy he had ever seen at the cathedral."

The picture looks awful to me and instills no reverence at all. A stupid mod Church and a ridiculous "risen Christ" looking like he is giving a shout out to somebody, "Hey! Peter! I can see your house from here!"