TO WATCH OR NOT TO WATCH OR IS IT TOO MUCH WATCH? THAT IS THE QUESTION

I have a disclaimer, I do wear my watch during Mass and on the right wrist because years ago I developed a rash under the watch on my left wrist.

But prior to Vatican II, it was the custom to remove one's watch to celebrate Mass so that nothing would distract from the elevations and at other times during the Mass.

The other thing I don't like, and never have done is wear a ring since becoming a priest. I think only a bishop should wear a ring and certainly no priest should every wear rings during the celebration of the Mass! How tacky!

But with that said, is Bishop Conley's watch a distraction? 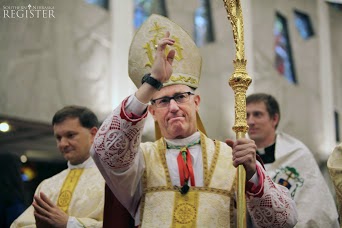 Maybe priests should just wear pocket watches and this would not be an issue. I have a picture of one of our former pastors here in Waycross in the 1920's and he is wearing a cassock and biretta and the cassock has a watch pocket at the waist with the gold chain draping across to the buttonhole where it is fastened.

Though I have worn wristwatches (formerly called "strap watches" when then were a new item in the 1920's), I prefer a good quality mechanical pocket watch and chain. Good quality new ones are hard to find (unless from Europe) so I usually wear a refurbished antique one. For several years now I've been wearing a 1924 Studebaker watch which keeps good time every day if cleaned periodically. The only problem these days is when I buy new trousers I have to get them to add the little slit watch pocket under the waistband on the right side as this is no longer standard on most pants these days.

This is completely a side post. But if the new mandatory retirement age for bishops is 75, does that mean that Cardinal Wuerl will be required to retire next year?


Father, I never have been aware of a watch on the priest's wrist at the Consecration and I have been a Catholic since birth.Truly, to me this is a non-issue.

Rings are worn by many priests now, as signs of their celibacy, as I have asked priests why they wear a ring. Some were given these by their families and some purchased such like a wedding band to the Church.

Do not some orders wear rings? As to that, I also find that a non-issue. Of course, the married Catholic priests I know all wear wedding bands, even those in Josephite marriages.

Really, I think that unless the jewelry is hugely gauche, there is no problem.

LOL! No, Father, I don't find it distracting - just funny! It's so incongruous, I'm reminded of some photos over at the Bad Vestment Episcopalian site [is it still on?]

About "watchin"g at Mass. I am not a priest, but I feel I have to wear a watch because our TLM comes before a Novus Ordo in a small chapel that belongs to our parish. Those NO people watch us - i.e., they're there, standing in back of the chapel even before Father is done with the Last Gospel and I always feel they are hurrying us up.

After our Mass, a few of us women still have to put away our TLM things - the three-ply altar cloths, three tall brass candlesticks on either side of the crucifix, Father's Latin altar missal, the vases of flowers behind the crucifix, our Parish Chant hymnals, lending mantillas and neckties, and the small statues of the Sacred Heart and the Immaculate Heart which belong to us but which the NO people don't care for - and also set up the NO altar in the way it was before we converted it to the TLM.

We also have to move back their huge plants and flower arrangements to the floor fronting the altar, which we had removed for our Mass because there is where our priest stands.

As I'm the chanter of the Gradual and the Alleluia, I feel that when Father has somehow started the Asperges just a tiny bit late [due to a number of confessions before our Mass], I have the option of chanting the Gradual and Alleluia in the shorter psalm tone contained in the Liber Brevior, instead of the long standard form.

We of the TLM are always trying not to upset the NO people, who feel they "own" the chapel, since they were there ahead of us, long before Summorum Pontificum was issued.

Thus, our TLM ideally should take no more than one-and-a-quarter hours [with chanted Propers and Ordinary], if we are to maintain peace with the Novus. It's always rush-rush for us trads, thus we need our watches.

I feel naked without a watch. So no, not a distraction. I do think fancy watches should be avoided. Patriarch of Russia Kirill got in trouble for wearing a fancy watch. Nor should they be rubber band digitals because they should be dressier.

I prefer an hour glass opposite the sanctuary lamp.

Seriously, I think it is a violation of priestly simplicity to wear a ring, unless one possesses a doctorate.

Don't know about the watch, but if he's going to wear a Roman chasuble he really needs a pontifical dalmatic.

I never wear a watch and do not have a cellphone or a smartphone.

Thanks be to God.

I think his watch is fine.

For popes, cardinals, bishops, priests....boxers or briefs? (Or "commando"?)

A priest wearing a watch during mass is one of my biggest pet peeves. I know it is not a big deal but I find it distracting and it takes away from the beauty of the vestiture.

A set of episcopal gloves would have been nice . . .

Why do you care?

Gosh JBS....it's Thanksgiving Day. I hope you don't stay angry all day. I'm making my absurd addition to this absurd conversation. Please don't really tell me about your underpants.

Unlike a very, very high prelate that we all know about, there's no evidence in the photos that Bishop Conley's watch distracts HIM during the liturgy.