ALL MASSES AT SAINT JOSPEH CHURCH, MACON, ARE AD ORIENTEM! (TOWARD THE EAST) 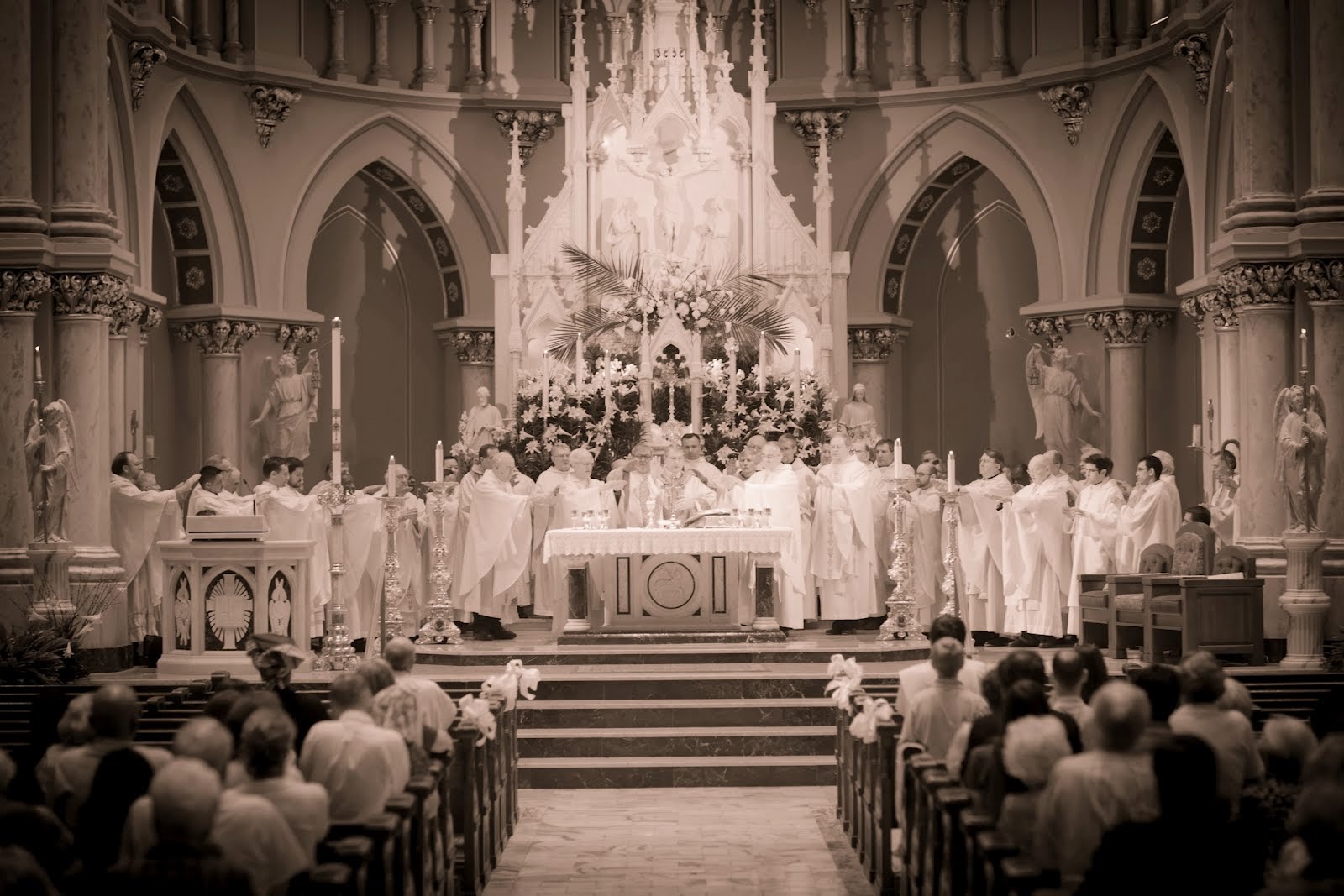 When the priest faces this way a common crucifix or both the celebrant and congregation is all that is needed: 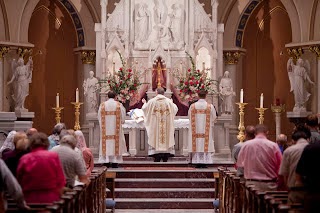 Those who think it is retro to celebrate the Catholic Mass toward the east like Bishop James Conley does in his ultra modern cathedral are apoplectic that this tradition is finding a recovery in the 21st century.

However, traditionalists who have a narrow view of ad orientem should reorient their narrow view to a wider one. At St. Joseph Church, no matter which way the priest faces the altar, toward the nave or toward the apse, symbolically he is facing the liturgical east. Why?  Because of the placement of the crucifix in front of the celebrant, not the direction the priest and people are geographically facing.

At the Basilica of St. Paul Outside the Walls in Rome, the celebrant faces the geographic west  toward St. Peter’s Basilica. Symbolically Saints Peter and Paul face each other. At all the major basilicas in Rome beginning with Rome's cathedral, St. John Lateran, the first to be built by Constantine when Catholicism became the law of the Roman Empire, basilicas were built with a free standing altar and the celebrant facing the geographical east while at the same time facing those in the nave who faced him.

It is important to keep in mind that after Vatican II the major basilicas did not have to reorient their altars whatsoever. the novelty, though that developed in the late 1960's or early 70's was the reorientation of candlesticks and the central crucifix. At St. Peter's the novelty was for very low flung candlesticks and no crucifix. Then Pope St. John Paul placed four taller candlesticks on its altar and a large crucifix, but it was to the side, not central.

Pope Benedict recovered  the emphasis on the central crucifix on the altar even when the celebrant faces the nave, thus the crucifix becomes the point of the symbolic liturgical east, not necessarily the direction of the celebrant.

It seems both traditions in this regard, the central crucifix or celebrant and congregation facing the same direction developed in close proximity. In the immediate aftermath of Vatican II when the altars were repositioned a central crucifix still remained for some years until liturgists decided otherwise somewhere in the very late 1960′s or early 70′s. They didn’t want the elements of bread and wine (consecrated or not) to be in competition with candles and cross or obscured by these let alone the celebrant. The whole concept of competition with what is on the altar and being able to see the bread and wine prior to consecration and afterward seems to be the modern novelty (abuse) based upon an over-emphasis on meal to the detriment of sacrifice. Of course the Holy Sacrifice of the Mass is both sacrifice and banquet, not either/or but both/and.

In my parish one of our four Sunday (Ordinary Form) Masses is toward the apse for the Liturgy of the Eucharist, but for all Masses here, there is still a central crucifix although low-flung on the altar serving the purpose that Pope Benedict suggests. And in my church when I face the congregation I am facing geographically eastward and when facing away, geographically westward but all Masses are symbolically eastward. I love ad orientem! Don't you?
Posted by Fr. Allan J. McDonald at Thursday, November 27, 2014

The celebrant in the early basilicas (as in the Roman basilicas today) stood at the apse end of the altar, but did not face 'the people' who would have been in the side aisles rather than in the nave. At the command 'Conversi ad Dominum' (after the homily) they turned to face in the same direction as the celebrant.

With the reintroduction of the ambo after Vatican II it makes sense (and is implicit in the the Novus Ordo) for the priest or deacon to face the congregation for the Liturgy of the Word, but for the common orientation to be resumed for the Liturgy of the Eucharist. This is so blindingly obvious it is difficult to see why it is not practised universally.

JBS, Wouldn't help Ignotus. He doesn't reflect in a mirror…LOL!

Despite knowing the constant teaching of the Church from earliest times, I’ve never been able to fully internalize the argument that the celebrant should face the East whence Our Lord will indeed come in power and glory to judge the living and the dead.

What the last forty years of liturgical experimentation have shown is that belief in the Real Presence in the Eucharistic Sacrifice is invariably diminished when priest and people do not face in the same direction. No matter whether that common direction is east or west, north or south. In parishes that in recent decades have preserved a common direction of worship and celebration, whether OF or EF, the faith of the people has remained solid, confessions have been frequent, devotions have flourished, and vocations have been abundant.

How many parishes with versus populum celebration share these characteristics? If forty years of decline is not enough to make the point, what would be? Perhaps those who cannot learn in forty years, can never learn.

JBS said, "I still like the idea of a large, tilted mirror above the altar,..."
Oooo. Oooo. THERE'S an idea! Or better yet, given these modern times, big screens set up around the church to give everybody a great view, and cameras pointing at the altar and priest to give close up views of various "moments" in the liturgy! Rich parishes could have a control room, just like T.V. stations, that could do like they do at sporting events, going to different shots and zooming in and out and so on.
LET'S DO IT! (I hope people know I'm being sarcastic here, just as I expect JBS was being. :-) Happy Thanksgiving.)

Regarding revolving altars, look at the photo

the altar and circular altar rail at the National Shrine of the Little Flower in Michigan. If the altar rotated through a complete revolution during the Mass, then everyone there would have the sacred privilege of worshiping ad orientem (liturgically) at some point in the Mass.

Bee, reference TV screens set up around the church for those with an impeded view of the altar, it's commonplace.

I detest the invasion of technology into Churches everywhere.

John Nolan @ 10:38 am - No, I DIDN'T know that! I haven't seen it, and I'm in a pretty large archdiocese. But given the trend of things, I can see this being a "solution" to another non-problem. One that further detracts from the sacred time with God. Yep, nothing like "progress."

This is a rhetorical question, but why, oh why, do our (some of the) clergy insist on getting caught up in the minutiae of things and effectively doing everything BUT worshiping God at Sunday Mass? It seems the last thing some priests are interested in at Mass is praying. Actually praying. To God.

I don't care whether we sing every part of Mass, or the priest sings it all, or not at all, or if there is the 4 song "sandwich" or not, or singing in Latin or whatever. What I am after is a time and place to worship God. Not myself. Or the community. Or my social circle. But to pray. Actually pray in a holy way. To God. When I sense the priest is all about the accidentals and not even praying, I find I cannot engage with him in the worship of God at Sunday Mass. I keep doing my best in spite of it, but it sure is discouraging.

The way FCAP has been interpreted since V2 has not only turned the Mass into a community celebration, it has made it overly didactic - people must hear everything and see everything. Not that it is entirely successful even at this. The OT reading on Sundays is a case in point - for it to mean anything to the average pew-sitter it needs to be explained and put in context, but it rarely is.

Ultimately, I'd love for every parish to offer Mass facing Liturgical East, but the Crucifix is important for us in the pews, I can't imagine how much more important for the celebrant. for All VP Masses, there should be an altar crucifix.