THE PROBLEM WITH PRIESTLY AND EPISCOPAL ORDINATIONS/INSTALLATIONS TODAY

And when liturgical music becomes the cappa magna! 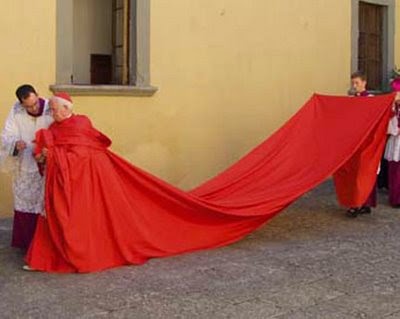 Archbishop Blase Cupich's Episcopal Installation Mass on Tuesday was par for the course in terms of musical selections, disjointed music of no consistent style, languages and triumphalism.

Let's start with the triumphalism that began the Mass with its procession. The song which I did not know was nice enough, but with trumpet, tympani and a host of other royal accompaniment and style of playing, one would have thought a coronation liturgy was beginning better suited for a king.

I can't find a video of the Mass but I am sure there is one. The various styles of music were very disjointed too, from the triumphant opening hymn to the operatic Responsorial Psalm to the Gospel music and the quasi folk songs, like "Taste and See."  Sentimentality, triumphalism, political correctness and opera were all in play.

Let me make it clear, the Cathedral choirs there exhibited perfection in technique but showmanship as well in their triumphant styles.

And of course political correctness points to making sure Spanish is prominent, English as well and any other language group represented at the Liturgy.  Some songs were a mixture of langauges.

Perhaps Chicago could learn from papal Masses in Korea and certainly at the Vatican where Latin, (who would have thunk?) unified the Church in one great voice and hymn and praise.

Could you imagine how much nicer, less triumphant, more unifying and less political correct Archbishop Blase Cupich Installation Mass would have been if there had been the chanting of the Litany of the Saints (in Latin) for the procession of the cardinals, archbishops, bishops and priests that would have concluded with the choir chanting the official Introit as the Celebrant approached the altar and incensed it.

Would not the Jubilatio Deo Gloria being sung in a sober way without any refrains or flairs been, well, glorious?

Would not a chanted Responsorial Psalm been better than the operatic one?

And for more sobriety, why not the official Offertory and Communion chants in Latin with fillers where needed and the simple Jubilatio Sanctus, Mystery of Faith and Great Amen and Lamb of God?

Actually the Lamb of God was in Latin.

Noble simplicity as well as authentic humility without any smack of triumphalism should mark Episcopal Ordinations/installations and today these should have a bit of a penitential sobriety!
Posted by Fr. Allan J. McDonald at Thursday, November 20, 2014

Some propers were chanted.

Absolutely!
A cautionary: the following is a rant..

I DVRed (is that a verb?) the midnight replay of the installation Mass because I had only caught the tail end in the afternoon. Indeed it was a hodge-podge, annoying at best and distractingly broadway-staged at worst. My take--it was probably choreographed to represent the inclusive diversity in Catholicism; but instead, it represented the tangled mess of disunity that is presently killing us. Really dumb-headed. I deleted the recording in disgust or I would offer to burn a CD for you.

Father, your questions are absolutely correct and spot on. Is Holy Mass, the great prayer of the Church, meant to unite us transcendently or divide us into entrenched divided groups of noisy, bickering children trying to out shout each other?

The very fact that we would even be discussing the pros/cons of this Mass reveals the dilemma. All we pew-sitters crave is a bit of quiet, deeply transcendent simplicity to inspire our difficult lives. Is that asking too much? Do we have to spend big bucks to travel to holy monastery retreats to find it? If so, is it any wonder at all that so many parishes are struggling financially?
Narcissism is the plague of our age...

This made me think of when Pope Benedict came to America and I watched footage of one of his Masses at a stadium. It was painful to watch, because it was downright embarrassing. It wasn't about the Mass, it was about showmanship--or, more to the point--showing off. First, there were all these militant, pro-abort politicians there parading their "faith" to the country. Then, as Jdj notes, everything was choreographed to represent inclusive diversity. About the only thing missing was tribal drums and a native American medicine man (see, I didn't say "Indian"). A bacchanalia of political correctness, to be sure.

Our national motto, "E Pluribus Unum" means "Out of many, one." It seems our modern world, including our all-too-worldly-leaning Church, has got it backward.

By the way, the Pope when in Korea had to say his parts in Latin since he doesn't speak Korean and to use Spanish or Italian would have been absurd. However, the congregational singing was all in Korean, and so the unifying effect of (say) a Gloria, Credo or Pater Noster in Latin was entirely missing.

Unfortunately for Chicago, it's my experience--though admittedly not vast in this area--that you can often tell what kind of bishop the designee is going to be from the nature and quality of his installation Mass.

Robert Kumpel, I believe the "downright embarrassing" Mass you describe is the one celebrated in Washington, allegedly planned under the close supervision of current Vatican favorite Card. Wuerl. Recent blog comments about Card. Dolan have have not all been entirely complimentary, but at least there was a nignt-and-day difference between the Washington liturgy and the public Mass planned for Benedict in New York. (Like one was plainly Catholic and the other was, well, . . . . multiculural, which literally implies non Catholic, does it not?)

Trumpets and drums have a place in liturgical music, I'd have thought. I was mightily impressed by the processional music used for Pope Benedict's visit to Westminster Cathedral, and quite often listen to it and the following introit on YouTube. Apparently Msgr Marini thought that this was the most impressive of all the masses that he'd MC'ed outside Rome (it was a shame that Cdl. Nichols kept stumbling over the Latin though).

Yes Henry, it WAS the D.C. Mass. Or, as I tend to remember it, the "Pelosi Sacrilegious Communion Fest."

If Cardinal Wuerl was behind that Mass in Washington D.C., then that explains a lot. Journalist Allyson Smith cornered then-Archbishop Wuerl in 2007 at a California event and this exchange took place:

Wuerl: "That was a matter between the university and Nancy. They were offering their location, and the Mass was celebrated by a priest with faculties, and there was no, there was no reason to make any comment about it."

Smith: "Do you intend to discipline her at all for being persistent and obstinate about supporting abortion and same-sex marriage?"

Wuerl: "I will not be using the faculty in that, in the manner you have described."

Wuerl: "You're talking about a whole different style of pastoral ministry. No thank you."

It is not up to me to judge Cardinal Wuerl, but he certainly seems to be in direct contradiction to Cardinal Burke's (and the traditional Church's) approach. And I suppose the pressure to stay friends with the local pols is stronger than ever in a place like Washington D.C..

Interesting to compare this with the Ordination of Marcus Stock as Bishop of Leeds last week. Two traditional hymns (entrance procession and after Communion). Simple Kyrie (Mass XVI). Polyphonic Gloria. Sanctus and Benedictus from Mass VIII. Polyphonic Agnus Dei. Latin motets at Offertory and Communion. The Te Deum sung in Latin (and it was noticeable that the new bishop sang it from memory).

The rest of the Mass was in English but much of it was sung. The Roman Canon was used. The only 'modern' music was the Responsorial Psalm (a bit operatic for my taste). But no Broadway and no political correctness.

What is your opinion on people like me who consider men ordained / consecrated after 1969 invalid due to Paul VI changing holy orders in June 1968?I attend a independent catholic church because our priest was ordained in the pre-june 1968 rite by a bishop whom was ordained / consecrated in the pre-june 1968 rite.We also observe the pre vatican 2 Mass.(1946 mass not the 1962) please understand I ask this in all due respect and out of curiosity.

This is not opinion but merely fact, you are on schism. Would be prudent to go to a Catholic priest on union with the pope for confession and reconciliation with the true Church.

I respect your opinion and would've agreed with you 5 years ago.If I may could you please possibly state your views on Quo Primum?

I want to thank you for responding, and look forward to your thoughts on Quo Primum.May the Holy Trinity bless you.