WHO COULD DISAGREE WITH POPE FRANCIS' REMARKS ON ANNULMENTS THIS MORNING?

The Holy Father hit the nail on the head this morning! I find myself in agreement with everything His Holiness says below! 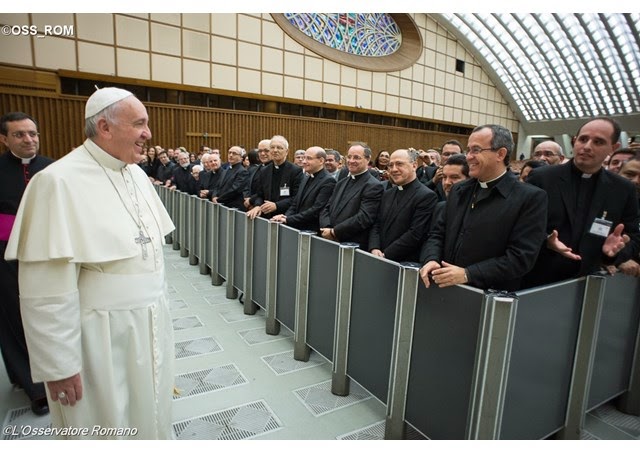 (Vatican Radio) Pope Francis on Wednesday spoke about the importance of fairness and accessibility in the proceedings of Church Tribunals trying to adjudicate the validity of marriages.


He made his remarks before his General Audience, when he briefly greeted participants of a course offered by the Tribunal of the Roman Rota on “Instructing a Case for the Dispensation of a Marriage ‘Super rato et non consumato’”  -valid, but unconsummated marriages - which can be dissolved under certain conditions according to Church law.

“In the Extraordinary Synod [on the Family], There was talk about procedures, processes, and there was a preoccupation for streamlining the procedures, in the interest of Justice,” Pope Francis said. “Justice: For decisions must be just, and because there must be justice for the people who are waiting.”

He also spoke about the Commission  for the study of the reform of the matrimonial processes in canon law, which was announced in September, which he said is designed to hope streamline the process: “A path of justice, and also charity, because there are so many people who need a word from the Church about the marriage situation – be it a yes or a no – because this is just.”
He said some processes are “so long and so weighty” that people become “discouraged” and leave.
He then provided an example.

“The inter-Diocesan Tribunal of Buenos Aires had – I do not remember, but I believe –15 dioceses in the first instance. I think the furthest was 240 kilometers away! …It is impossible to imagine that ordinary people…can go to the Tribunal: They would need to go on a trip, missing days of work, and there is also the cost…so many things…They say: ‘God understands me, and I go on like this, with this weight on my soul.’ And Mother Church must judge and say ‘Yes, it is true, your marriage is null’ or ‘No, your marriage is valid’. But [she must] make a judgment and tell them, so that it is possible to go forward without this doubt, this darkness in the soul,” said the Holy Father.

“There have been public scandals,” the Pope said. “I had to dismiss a person from a Tribunal some time ago, who said ‘Give me $10,000 and I’ll take care of both processes:  the civil and the ecclesiastical’. Please, not this!”

He said the Synod also had proposals about the costs of the process, adding “when you attach economic interests to spiritual interests, it is not of God.”

He concluded by reminding the students to always look to the “salus animarum” [the salvation of souls], adding this is not necessarily found outside of justice, but “indeed, with justice.”

The emphasis on justice is definitely encouraging.

Real justice, it seems to me, would also ensure the regularity of the procedures, form one diocese to another. That is not done now.

I have had occasion to learn, in the last few years, that Knoxville has no tribunal, but sends its cases to Nashville, and there is no fee. Chicago, on the other hand, charges $900, when last I looked, and I have no idea about the time it takes.

In Atlanta, there is a $500 fee, and though they claim an average of 1 year to handle a case, of the dozen or so I knew in our then parish, only one had taken so short a time.

Also, I have heard both that "$500 doesn't cover the cost" and "the staff are all volunteers, which accounts for the slow process." Ummmm... I think those cannot be true at the same time.

I have no quibble with the canons. I have read Dr. Peters' most excellent volume on the process, and have a good (lay) understanding of it. The injustice, such as it is, appears to be in the execution, and in local variations.

What the Holy Father describes was not my experience with the annulment process. In Hartford Archdiocese the defender of the bond (the procecutor went to the spouces involved to confirm their testimony and the witnesses were handled by sworn statements. No one travelled to the tribunal either the first or second. The fee was a few hundred dollars that was adjusted based on ability to pay, it could even be waived. It took 13 months total. I think the problem is a lack of uniformity Church-wide, not a lack of justice.

I don't mean to be snarky, but it is a shame that a lack of corruption and good management is considered news worthy. And why is it that this sort of tribulation was forced on the poor in the distant provinces of Argentina (e.g.) when their poverty in every other respect was in the forefront continuously? It is because this sacrament ranked lower in concern than the daily bread concerns. But doesn't this show how the point is missed and why Church attendance is down? Rather than serving as a model for solving problems in a Christ like manner we treat the needs of Christ as ancillary to our earthly desires. Going to Mass is what we do after our real needs (desires) are met. Unless we have something else to do.....

The power to bind and loose was given to the Apostles, who gave it to the bishops they ordained. The bishops may give that authority to priests, or they may not.

Consider that, throughout Church history, some priests could hear confessions and some could not because the bishop has not given that authority.

Your point is a good one, though. It has been a very long practice to allow for ecclesiastical divorce in certain cases if the bishop chose to "loose" the obligation.

If there are priests who have not been given the power to bind and loose, I've never seen one....and I have been around for a long time.

Priests derive the power to hear confessions from the bishop. In the West, this is known as jurisdiction. So, priests have to have jurisdiction from the local bishop to absolve. This is something that the people don't really notice because they aren't the ones having to sort out the permissions. Anyway, if you look at the ordination rite (in the older version, anyway), it is clear that the power to celebrate the Liturgy is conveyed separately from the power to forgive sins. Also, consider that certain sins must be referred to the bishop for absolution depending on the practice established by the bishop.

My local Orthodox priest cannot hear confessions. There is a hieromonk who travels around the Metropolis hearing confessions or people go to other priests.

JBS....really. It is not MAN who forgives..."looses" sins. It is God. It would not be MAN loosing (putting asunder) a marriage. It would be God. Surely you understand that.

Are those two "quotes" from Jesus in conflict with one another...."let no man put asunder and whatever is loosed is loosed"? Yikes. If we can't rely on actual quotes from Jesus, what can we rely on?

Mark, your explanation of "what JBS meant" was just a repeat of what JBS said. I know...this is an alleged "quote" from Jesus that was written many years after he died.

The second part of your post is mumbo jumbo written by you or who knows who. It seems to mean nothing.

Anonymous @5:28, since you want to play the form criticism/de-construction game ( a complete waste of time, btw) Jesus' statement in Matt:19:6 is quite likely authentic. It is certainly in keeping with his other comments on marriage in Mark and John, and it is characteristic of Christ's emphasis upon the sanctity of the relationship between man and woman. It also gets into Jesus' apocalyptic teachings (which abound in Matt.) and the ultimate wedding of Christ and His bridegroom, the Church. Jesus used the analogy and example of marriage many times in His teachings. There are collections of sayings of Jesus, some apocryphal, some probably authentic, which come from oral tradition but which did not make the canonical cut for various reasons. Just because a Gospel was written many years after Jesus' death does not mean that the writers just made stuff up. There were strong oral traditions as well as eye witnesses still living when some of the Gospels were written (Matthew possibly as early as 70 AD). So, it is probably a safe bet that Jesus words on marriage are authentic…so much for the "new hermeneutic."

Marc
"Priests derive the power to hear confessions from the bishop." True.
Father (Venerable) Solanus Casey ,whose feast day is today, was not given permission to hear confessions or to preach, because his knowledge of theology was judged to be so weak.