SHOULD BISHOPS, INCLUDING POPES, MODEL HOW TO CELEBRATE THE MASS AND OTHER LITURGIES OF THE CHURCH?

The bottom line is yes! Why? Because the revised liturgy is so poorly celebrated in so many places and clergy and laity have been cooked slowly in the crock pot of poor liturgy that they actually think it is good liturgy. 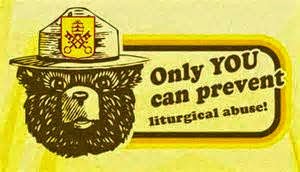 Pope Benedict's style always seem lethargic to me. So does Pope Francis' style. But both celebrate the Mass by the book at the Vatican. And at the Vatican the propers are chanted, incense is used properly and Gregorian Chant and the organ have a place of pride.

I did not like the fact that Pope Benedict did not codify the things he recovered for the Ordinary Form in particular kneeling for Holy Communion. Pope Francis has not continued this tradition at the Vatican Masses--this one reform if made mandatory would have been the single best "reform of the reform" bar none.

Even a hippie dippy type Mass with contemporary music that sounds like rap or Broadway ditties, or a honky tonk  would be vastly improved with required kneeling for Holy Communion.

The Mass as it was celebrated by rank and file parishes prior to Vatican II did not need popes and bishops modeling how to do it. It was celebrated relatively the same from parish to parish and priest to priest.
Posted by Fr. Allan J. McDonald at Wednesday, November 12, 2014

Maybe my previous comment was a bit harsh, but here's the point: I have watched a lot of bishops celebrate Mass either in person or on TV. Many do a fine job. Most do at least a decent job. Too many, however, do a poor job. Their biggest error? THE HOMILY. I don't know why, but a lot of bishops try so hard to convince us that they are just like the rest of us that they give us dumbed-down homilies that are way too casual, filled with inane observations and silly jokes. A good bishop doesn't try to win the crowd to his personality. A good bishop wins the crowd for God.

Anon, if I may conclude your point, they do model the Mass every time they pray it. When they offer a homily that is a non sequitur to the lessons of the Mass, or stretched to fit, it says to us that the lessons are OK, but here is what is really important. Dumbing down is a good point, as well. Many of the Masses are deconstructed to model the simple Mass of a parish in some remote and poor part of the world. The vestments and art are imitations of some primitive art form that is often condescending rather than complementary.

I often wished that Pope Benedict XVI had offered Mass in the EF he Ensured with SP. But I think he understood the proselytization needed and took a gentle hand so that people would rediscover that form on their own.

"The Mass as it was celebrated by rank and file parishes prior to Vatican II did not need popes and bishops modeling how to do it. It was celebrated relatively the same from parish to parish and priest to priest."

Father, I agree. But there was only one form then.

I would say that the Roman Mass is by its very nature tied to a particular bishop, the bishop of Rome, in a way that other rites of Mass are not.

Even Cranmer's 1549 protestant communion service retained kneeling for communion. But they allowed communion in hand as a means of illustrating that they believed it was ordinary bread. Michael Davies has a lengthy set of books on liturgical changes during the Protestant Revolution and similarities to the 1960s and 70s. The familiar, casual treatment of our Lord brought about by those changes make it difficult, nay, hypocritical to teach and model reverence for kids. For example, the GIRM calls for a full bow to the altar, and a genuflection to the tabernacle, and a head nod before receiving the Lord. ???
It's ironic that those protesting the substantial physical Presence of our Lord were more reverent than those of us who profess and possess the true Presence.

I just looked back at the goings-on of this blog in its earliest days. The conversation then is much like the conversation today...whining about VII, the new Mass, yearning for the good old days. There was no Pope Francis to whine about though.

Y'all have been chasing your own tails around in circles for five years now. (At least it appears that this started in Nov, 2009.) Some of the names have changed but the beat goes on...

"Y'all have been chasing your own tails around in circles for five years now..."

Does this mean Southern Orders is *not* a "no-spin" blog?

Anon at 4:02 pm, I know what you mean! I have relatives who are doctors and are STILL trying to cure cancer. What idiots.

If one believes that prior to Vatican II priests pretty much celebrated Mass well and in the same way, one ought to read "Peregrinus Gasolinus" by Chapman. It is a humorous take on liturgical tourism.

rcg...so you thing that the endless circular BS that goes on here is in the same category as cancer research? wow...

I hate to burst "y'all's" bubble. But many of us have a longer view than the few years of this blog's existence. In fact, if you take a look back at the history of the Church, the failures of the post Vatican II Church are a mere blip on the radar screen. Even though we live amongst Catholics with egos big enough to believe that they have triumphantly defeated the Traditional Church, somehow that Traditional Church just hasn't gone away. In fact, it's the only sector of the Church that is solidly growing. So go ahead and dismiss us for "chasing our tails". Go ahead and laugh. Fads come and go. 2,000 years of Tradition cannot be suppressed, no matter how hard the grey-headed hippies try.

Christ is still present in body and blood and spirit and divinity, right?

We all believe in the same Jesus, right?

Little by little changes are creeping in. I'm tempted to go to a local Spanish Mass just to see how different the Mass is. If our recent "Multicultural festival/Mass" was any indication, I might not recognize the celebration. (I'm sure I would)

Perhaps my going could explain why the majority of proselytizing Protestants knocking at my door seem to be former Hispanic Catholics carrying the New International Version.

In which post is Fr. MacDonald "whining about VII"?

In which post is he whining about "the new Mass"?

In which post is he "yearning for the good old days"?

The Second Vatican Council was given a pastoral orientation to inject the Christian message into the stream of modern thought, and into the language, culture, customs, and sensibilities of modern man as we live in the spiritual turmoil of this modern world.

Father MacDonald studies and implements VCII here at Southern Orders and in his parish, doing so especially though dialogue. As Pope Paul VI put it, "Our dialogue, therefore, presupposes that there exists in us a state of mind which we wish to communicate and to foster in those around us. It is the state of mind which characterizes the man who realizes the seriousness of the apostolic mission and who sees his own salvation as inseparable from the salvation of others. His constant endeavor is to get everyone talking about the message which it has been given to him to communicate."

Actually, Anon @ 5:10, in a random and design-less universe, the two are exactly the same. That is to say, they are both equally useless and futile.

I'll leave it to you to explain why nihilism isn't true (given you likely believe in a subjective universe—whatever that is).

Flav, whatever that is, you, of course, may say whatever you wish, and Fr. McD. allows, however my comment at 5:10 was directed at rcg...not you. If you need clarification or explanation, may I suggest "Google.com".

I don't know what a "Flav" is either, Anonymous. Maybe that mystical google you mentioned can provide the answer.

I don't really care who that comment was directed at; I responded to it anyway. Mostly because I can, but also because it provoked you into responding.