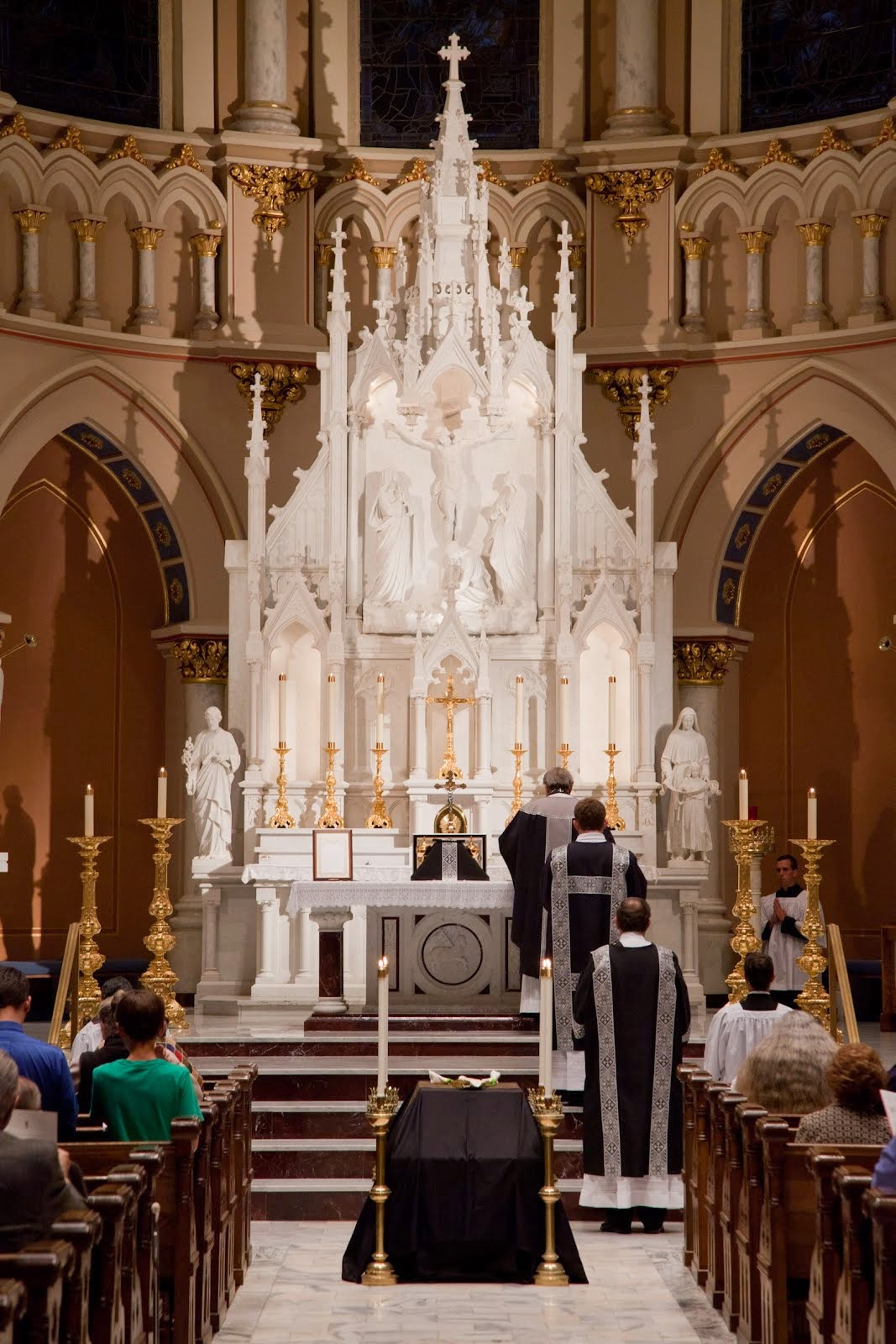 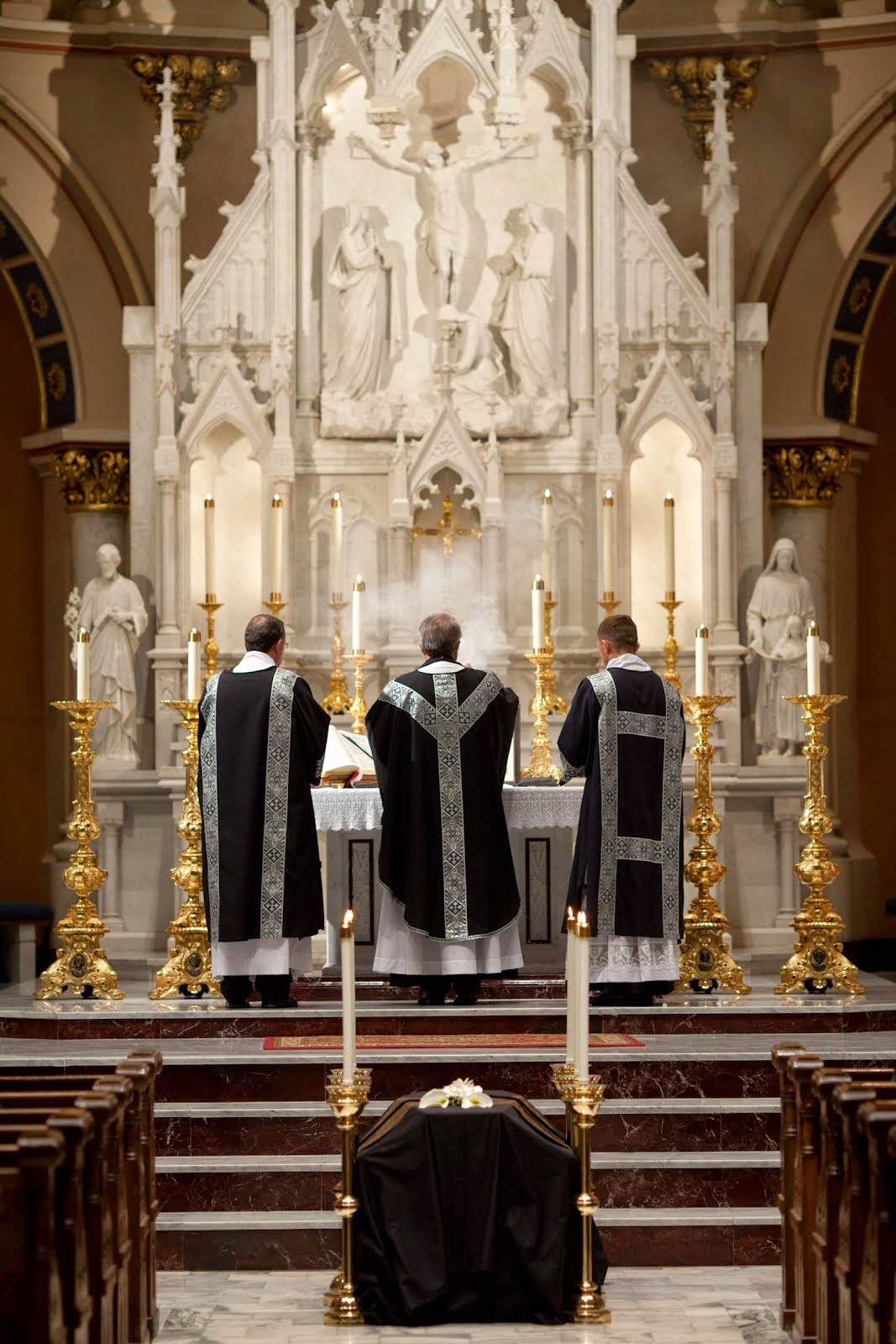 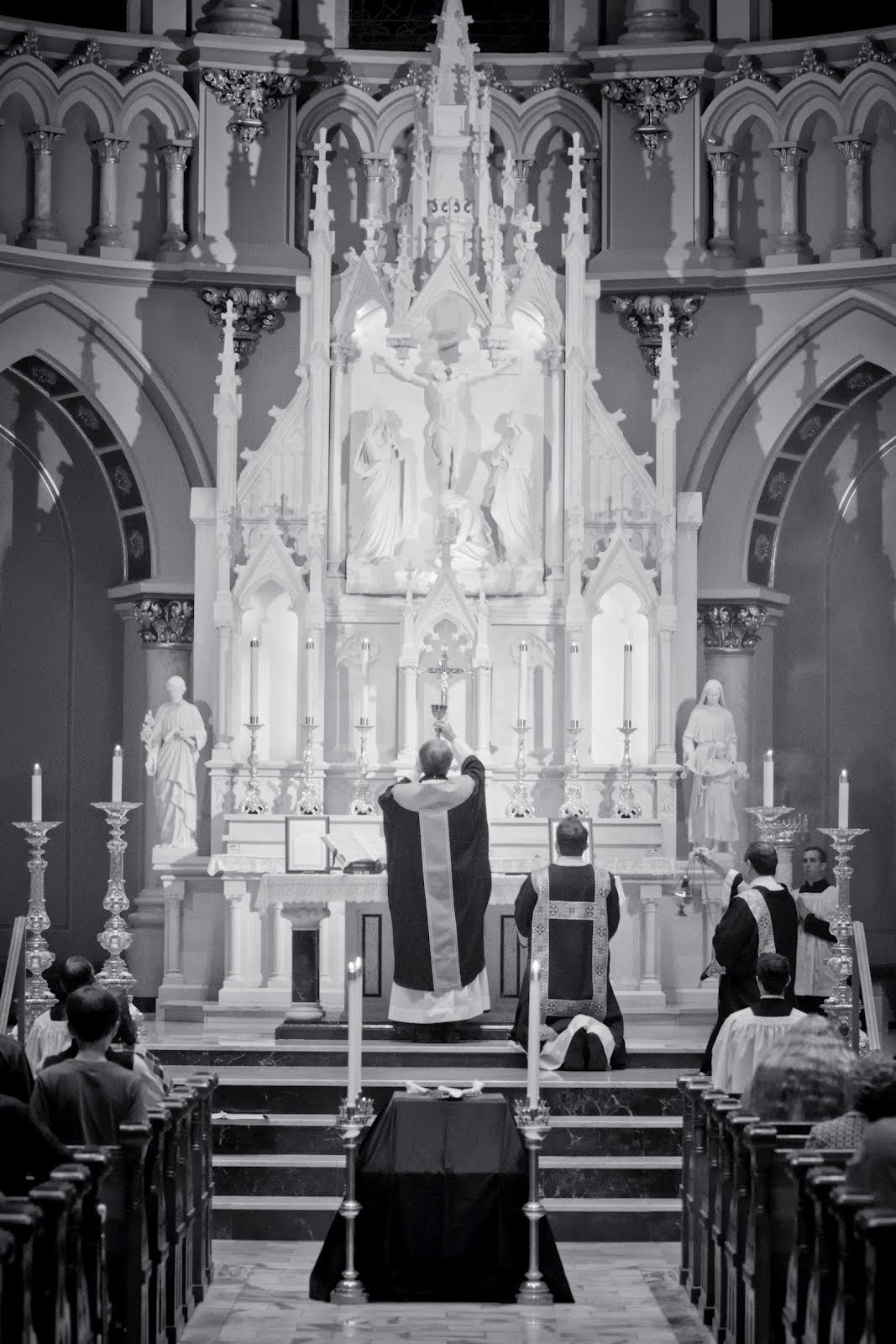 Many sources are reporting on Miami's Extraordinary Form Mass attracting younger congregations. I have to report the same. There is an attraction of mystery, choreography, reverence and piety that captures the imagination of our younger people, even those who are pre-school.

Over the years, when teenagers have attended the EF Mass here, I've had football players come up to me and say, Father, that was awesome.

Our last OF Mass celebrated like an EF Mass, that of Faure's Requiem, a young mother told me her two young daughters, pre-school and second grade were enthralled with the Mass in a way they never had been before--yes a Latin Mass!

But should we be surprised? As Pope Francis tells us over and over again (and I think he learned this also at the Synod on the Family in a way His Holiness did not expect) our God is a God of surprises.

While we attended mostly Low Masses back then, some of the fondest memories I have and prior to elementary school are High Masses especially at Christmas and other times. I thought these were awesome too!

I simply do not believe that the Ordinary Form of the Mass as abysmally as these are celebrated today in the majority of cases, captures the imagination of anyone's, religious imagination or otherwise.

As the testimony concerning our recent OF Mass celebrated in an EF way shows, this abysmal state could easily be changed but there is no one in most places willing to lead the way!

Here's what they are saying about the EF Mass in Miami:

Roman Catholic Mass was at one time universally celebrated in Latin, the ancient Roman language.

Latin is now sometimes referred to as “the dead language,” but it is not dead in Miami.
The Mission of Saints Francis and Clare is a Roman Catholic chapel in Miami that celebrates traditional Latin Mass every Sunday. It’s one of three local churches that offer this regular service. The mission has about 20 pews facing its single stained-glass window just above the altar.

Father Joe Fishwick has been leading the traditional Latin Mass at the chapel for almost 20 years. He says he’s noticed a change in attendance recently.

“The fascinating thing is the number of young people who discover the old liturgy and who fall in love with it,” he says. “There’s indeed a thirst for a return to one’s roots.”
Father Fishwick says he has seen more and more young people at Sunday’s Latin Mass since the death of Pope John Paul II nine years ago.

“I think maybe the younger generation, which has had no experience of that, has been completely starved of it,” says 30-year-old Miamian Josue Hernandez. “They see it and they run to it because they have been so deprived.”

“When you go to the older Mass, you have the Latin, you have the incense, you have the priest facing the crucifix and the focus is completely off you,” he says. “All the attention is turned towards the sacrifice.”

Look with all do respect my TLM parish is made up mostly of young, teens, and young families, and comprised of white, latino, black, asian and most likely homosexuals and you would never know this. We are there for one reason only and that is to worship Our Lord not each other. You must understand that it gets old when you have altar girls, felt banners, communion in the hand, rock, folk, mariachi and dancing girls, kiss of peace and all that entails the Novus Ordo. These youngsters are looking for the real McCoy with silence, respect, Latin chant, Mozart, Palastrina, Bach, stunning vestments, confession, modest attire, well you get it.
In other words they want what has been denied them for over 40 years, these are not "old" foggies. Just look at the seminarians in the F.S.S.P.,Institute of Christ the King, S.S.P.X. Bishop Morlinos young men in Madison Wisconsin who by the way insists his men learn both forms of the the Holy Mass. All are YOUNG men this is no coincidence. The TLM attracts the young they are not stupid they see what it has to offer and what the Novus Ordo lacks. Side by side the TLM and Novus Ordo are like night and day, yes the Novus Ordo whem offered reverently can be very nice, but lets face it 90% are just not that way.

At the Oxford Oratory this morning (Solemn Latin OF) it was not just the youth of the congregation which was striking - after all, it's still university term - but the youth of the clergy, most of whom appear to be scarcely out of their twenties. And the Oratorians are bi-ritual, the EF being celebrated every Sunday and Holy Day.

The same is true of the younger Dominicans, not to mention the FSSP and ICKSP. The trend is inexorable and there is nothing the ageing hippies can do about it. This is why they are increasingly desperate.

It was an extraordinary experience... The Novus Ordo celebrated with full chant of the propers in English, the ordinary parts in Latin, all the dialogues chanted, significant moments of silence according to GIRM, incense, ad orientem, and all the priests's parts chanted. Hope I didn't forget anything!!
Why is this not done on a regular basis? It was so uplifting and you felt as if you were in the antechamber of heaven. Our priests and bishops need to be more attentive to implementing as Father MacDonald says, if I understood correctly the "vision of Vatican II". Actually all you really need to do is the to implement the GIRM and the revised Roman Missal.
As a layperson I am really disappointed on the lack of liturgical spirit by so many of our spiritual leaders.
Father MacDonald I want to thank you. I wish more priests had your enthusiasm. And let's not blame everything on age - the Spirit moves everywhere....

Will some priest in the Augusta Deanery PLEASE pay attention to Anon 10:50?! It is such a travesty that year after year this is totally ignored here. Would it do any good to start calling priests out by name? Surely out of 10, give-or-take, priests someone could care enough about us to respond...years of suffering in the liturgical wilderness and watching family members and friends bored poor homilies, worse liturgies, and the you-owe-us-but-we-don't-owe-you-a-thing attitude cries out for priestly intervention. Renewal does not start at the bottom, but rather modeled from the top.

I'm confused. If everyone loves the TLM so much then why isn't it offered every Sunday?

Desiree, because so many Priests are lazy, cowards, indifferent, and have zero initiative. Others have lost their faith but continue on because they are not hiring at Wal Mart or the Tire Mart, and the rest just want to get along with everybody and not upset the Bishops, most of whom are just like the Priests only with the power to fire said Priests. TLM…Tired, Lazy, Ministry.

Diseree - The answer is that the TLM is not what most Catholics, or even a large percentage of Catholics, want or need. The TEM - Traditional English Mass - meets the needs of the great majority of Catholics in the USA.

PI you keep forgetting that. 88% of Catholics don't go to Mass, which means that actual participation has declined dramatically with the OF since 1970!

Good Father - No, I haven't. I'm sorry the numbers in your parish are so low and that in your own parish the number attending has dropped 30% in the last ten years. (Your October pew count numbers.)

Meanwhile, at Holy Spirit, the decline has been 3% in the last ten years (Same October pew count numbers.)

And while your parish may attend at 12% of registered individuals, the percentage participation at Holy Spirit is, at least, three times that rate.

For the solution to the Augusta deanery TLM issue, one must look to Grovetown (St. Teresa's) and Savannah (Bishop Hartmayer). As long as Augusta deanery politics (a.k.a. clericalism on steroids) continue as they have since 2008, there will never be another public TLM.

Another reason for the suppression of the TLM in Augusta is the poster at 5:06 pm on November 25. Who is he to decide/judge that "the TLM is not what most Catholics, or even a large percentage of Catholics, want or need"? What arrogance!

The facts of the matter regarding the TLM in Augusta are that in 2008-2009 over 125 MHT parishioners petitioned for the TLM. On Sunday, November 22, 2009 at 6pm, over 400 people participated at the first and only public TLM at MHT since Summorum Pontificum was promulgated. Evidently a goodly number in Augusta have a "want or need" for the TLM.

Gaspar,
Thanks. The poster at 5:06 pm is the priest at MHT who, together with the Bishop, denied the petition request. And, yes, "What arrogance!" aptly describes...

Gaspar H - Is it not also "arrogance" to turn one teen's comment - "that was awesome" - into a manifesto for what younger people are drawn to?

I suspect that if that same teen were to attend a NASCAR race, a Miley Cyrus concert, or the Superbowl, he would say, "That was awesome!" Meh . . .

Says who? Since when are you the Holy Father, Magisterium of the Church, or Almighty God Himself that you can decide/determine whether or not the TLM is needed. His Holiness, Benedict XVI, was crystal clear in Summorum Pontificum that the TLM was to be granted to the faithful who desire it. Last I heard you were only a diocesan priest "serving" the smallest Catholic parish in Macon. As a diocesan priest, shouldn't you be in obedience to your bishop and ultimately to the Holy Father and the Magisterium? Summorum Pontificum is still in effect and you have no authority to deny the faithful the TLM in your parish or other parishes if they desire and request it.

I doubt seriously that anyone in Ignotus' parish wants it. My impression is that most of them are there because of the way PI is. They could have driven across town to St. Jo's for the TLM if they wanted it. Not that I don't think PI should offer it on his own initiative, even if he does believe it is an outdated "symbol" devoid of real pres…er, meaning. Pastors and Priests need to understand that the flock's tastes and needs are being formed and not consulted.

Gene,
I think Gaspar H was talking about the havoc that Ignotus caused at MHT and in Augusta. After all these years, I'm still waiting for an answer from him. I still can't see the ice forming in hell yet.
Adlai

P.S. It's good to see you back on the blog. In your absence the post were quite tamer and there was no one to rebut Ignotus.

Adlai, good to hear from you. I have heard others speak of Ignotus tenure at MHT. Ignotus just walks blithely on. What was it Trey Gowdy said, "…I can't get past the arrogance to get to the irony."

Personally speaking,if my parish goes belly up and my only option is the Novus ordo,I will stay at home and say the 15 decade rosary.No offense to anyone involved.

This will most likely not be allowed to be posted.The problem is the new invalid post 1968 rite of ordination/consecration.If we had true clergy in every novus ordo parish,church attendance would pick up gradually & steady over 5-6 years.Until the new invalid rites are abolished & the novus ordo clergy are reordained/reconsecrated by valid bishop's,the novus ordo parishes will continue to tail spin into nothingness.