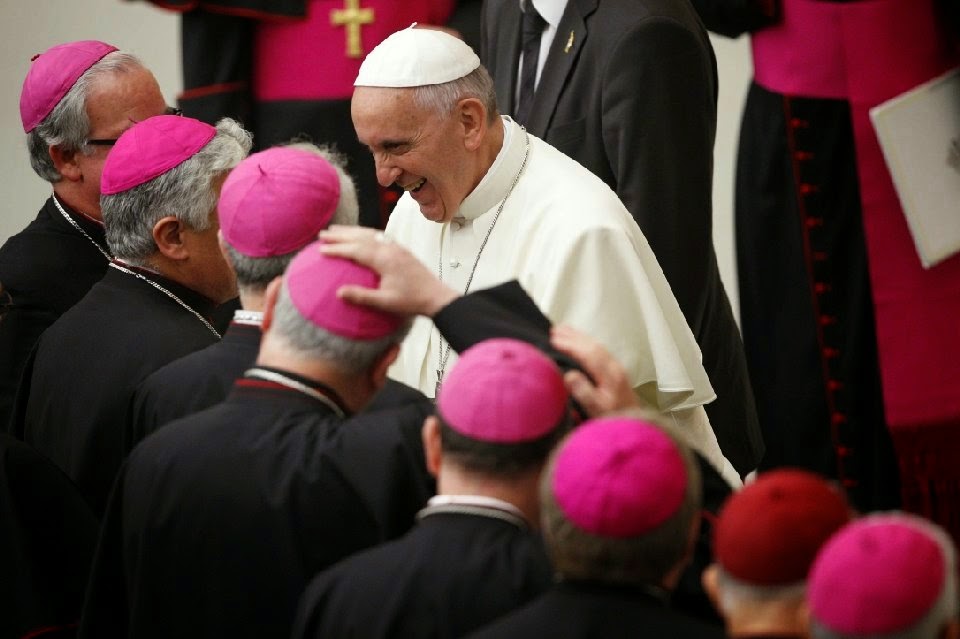 Okay, I'll admit it, the discomfort I have concerning Pope Francis isn't that of discomfort with the papacy or the office of the Petrine Ministry. It is discomfort with the person of the pope who seems to point to himself and his ideologies as the center of this ministry rather than service to it. Okay, I said it, but I am emboldened by Rocco Palma in his post today which you can read by pressing Whispers in the Loggia, here.

But this is a quote from his post that I think hits the nail on the head:


Sure, there's nothing new under the sun – a sense of qualms among some of the Apostles about Peter and his means of wielding the Keys stretches back to the church's very foundations. Still, in recent times, it's very new: for all the talk of Vatican II of late, in reality you'd have to go back to the infallibility debates of Vatican I (1869-70) to find the last time the Catholic world saw such an exposed contrast of thought among its leaders on the papacy.

In the current context, however, there is one key difference: the fights over what became Pastor æternus focused on the role of the Petrine office. This time around, the flashpoint is the man who holds it.

My final comment: I love Pope Francis because of his Italianess. My first cousin from Italy says he's the kind of pope she wouldn't mind inviting to her house for dinner, he's like one of the family.

There's nothing wrong with that and I love Pope Francis' pastoral touches. But it is becoming too much of the "cult of the personality" even more so than that of Pope St. John Paul II who had similar traits in this regard. Pope Benedict of course did not create the cult of the personality and suffered because of it in the press and with rank and file Catholics who prefer a populist pope rather than one whose personality fades to the background so that the office of the papacy comes to the fore.

Domagtizing pastoral theology is fraught with dangers. And making oneself the center of any formal ministry of the Church, be it the Bishop of Rome, any other bishop, priest, deacon or religious can only do harm in the long run and not benefit unity of bishops or the people of God.
Posted by Fr. Allan J. McDonald at Friday, November 07, 2014

" I love Pope Francis because of his Italianess. "

Oh let's be honest Father and you know I am correct in saying that the vast majority of Italians think non Italians are beneath them. I am not using the word barbarian, like they call non Italians to their face in Rome........with a smile and an out streatched hand ready to grab the cash. But that is what they think and that is how they treat non Italians.

Let's talk about Rome. It's a beautiful facade. There are no children being born in Rome, the birth rate is at zero percent because they all practice birth control. The churches are beyond description, yet they are empty. The city is gorgeous but try and find an air conditioner in 90 degree weather, or try and find an ice cube or a pat of butter. The Romans are very fashionable yet there are no jobs. The Italians glorified the Church in art but there is no faith left. It's basically a third world country were everybody dresses in Gucci. And when an American goes to Italy it is made know right off the bat that this is Italy and you adjust to it. Yet let an Italian come over here and they refuse to adjust and thats the way it is and too bad if you don't like it. They will insult you to your face without hesitation and not feel the leadt bit uncomfortable doing it. Sorry if the truth hurts but thats the truth.

So... this new pastoral technique... how much evidence have we from Bueno Aires that archbishop Bergolio's style actually increased the number and quality of 'faithful' Catholics, provided salt, light, and leaven to Argentine society and resisted the neo-pagan secularism sweeping the globe?

Does it in fact "work"? If not, then as others say, what's the point of "aggiornamento" if it results in a collapse of vocations, a collapse of the numbers of people going to Church, receiving the sacraments and living a counter-cultural, Catholic life?

If all these changes result in a Church at harmony with whatever modern society's latest fad or craze happens to be.... can we in fact claim it's "progress"?

Towards whom and what are we to "progress" towards if not Jesus and his Kingdom which is not of this world?

"My first cousin from Italy says he's the kind of pope she wouldn't mind inviting to her house for dinner, he's like one of the family."

With due respect for your cousin . . . Reminds of those folks who like Bill Clinton because he's the kind of good ole boy you'd enjoy having a beer with in a bar. But who wants a pope or a president like that?

Present popes (sitting or emeritus) aside, give me a pope like Pius XII whom I can respect without reservation, but never would dream of inviting him over for dinner.

I didn't love Pope Benedict for his Germanness but for his orthodoxy and clarity of thought and utterance. Benito Mussolini was Italian but would he have made a good pope? I thinka not! Although he might have made a good job of clearing out the 'gay mafia' in the Vatican; Francis acknowledged its existence early on but seems to have only encouraged it with his ill-judged off-the-cuff remarks. Musso was the only Italian leader with the guts to take on the REAL mafia.

People are people. Pope Francis is a person. He acts like one. He lets us see who he is. You (singularly and collectively) seem to prefer a solemn boring sourpuss who keeps his holy Pope act going all the time.

We have a new young priest in my parish who puts on the solemn, holy act. When he says Mass it's like he's overacting the roll of a priest in a high school play. Comical...

No one wants to criticize the pope. Yet many of us listen to the man holding that office and are very deeply disturbed. We are loathe to criticize him, yet some things are so blatant that they cannot be ignored. I have voiced my concerns in emails to friends who have knee-jerked back to me, "Please do not send us anything criticizing the pope." Fine, but I don't think it's wise to bury our heads in the sand. I've also notice people on this blog being accused of "hating the pope" and instructed to confess their mortal sins for merely expressing what they have observed. I am terrified of the fine line I am forced to walk at this time in history. I do not wish to separate myself from the Church or from Peter and I don't wish to criticize the pope, but I cannot just abandon what the Church has always taught because a popular personality in Peter's chair is talking like a loose cannon and giving, at very least, the appearance of contradicting the deposit of the faith. What's a Catholic to do?

Yours is the most crassly ignorant comment I have ever encountered on this blog. You have zero understanding of the Mass or the role of the priest. Why aren't you a Seventh Day Adventist? Nothing solemn or holy there, that's for sure.

Papa Ratzinger was no sourpuss. In person he was among the most respectful, kindhearted, and gentle souls I've ever met.

He was so completely NOT a "PanzerKardinal" or grant Inquisitor that only the Low Information ideologues could genuinely believe those media created nick names.

He was despised, hated, and feared because he was simply brilliant and his writing was beautiful. He defended the faith and exploded the conceit that so-called "progressive theologians" were that smart, that sophisticated, that well put together.

So if you can't refute someone's writing....what better than to attack him on the grounds of "his tone" (which is, after all, a question of subjective taste and not something to argue about).

But even there... "tone" of our previous Popes was not to crush people or thunder condemnations on them from on high.

I think Gene's onto something. If Pope Francis were not Italian, Fr.McD would probably be piling on and slugging and kicking and gouging with the best of you...the rest of you.

Genius John, It's nice to know that I can always count on you.

Here's a little surprise though...
I have more understanding of almost EVERYTHING than you do.

A priest overacting his role...is he facing the congregation because yea, that is a problem in facing the congregation, affectivity and there is a liberal and conservative type for each. Liberal looks like a smiling Baptist minister with his hair slicked back and the conservative like a pious image or icon. Turn and face the East and problem solved!

Italy is wonderful, I spent four months last year at this time and Rome has many more children today thank God. Italians work to live and American live to work. I prefer the Italian way!

They have Catholicism in their blood even if they don't practice it institutionally. I do think that Pope Francis may be having an impact in Italy on that aspect because of his Italian connection and he understands the Italian disdain for the rich Church disconnected from people.

My mother saw in person and shook the hand of Pope Pius XI with my dad on their honeymoon in Roma--she always commented negatively on the the rich surroundings, the ermine and the robes. Keep in mind this was December of 1945 and she and her parents and siblings lost everything in Livorno, I mean everything, lived as refugees and as animals as my mother described it in Siena in caves having been evacuated from Livorno because of the bombings and her apartment building destroyed with those taking refuge in its basement at the time all killed. Only by the grace of God they were elsewhere during that air raid.

And Pius, not Pious but who knows.

Did his tiara light up? May have been Pope Prius. I don't think having an affinity for Italians is bad unless it blinds you too much.

I am concerned that anyone would want to neuter the capabilities of a person like Cardinal Burke. Even if I disagreed with him I would need him to test my own ideas. Besides, why not try to have him as an ally?

And why slam down Burke when the deceptive Cardinals are not chastised at all? It makes it look like Pope Francis was in on it and is using his popularity to ride out the tiny amount of backlash. Is this hegemony, like gay marriage in the USA, that is taking small defeats while ever inching forward? It certainly appears that we are being desensitized to something coming our way.

Your trolls' manual should have advised you that to make claims for your superior understanding without giving any evidence of it makes you look ridiculous, probably delusional, and possibly unhinged.

My vote's for delusional, as his own words clearly suggest. But as for unhinged . . . Who am I to judge?