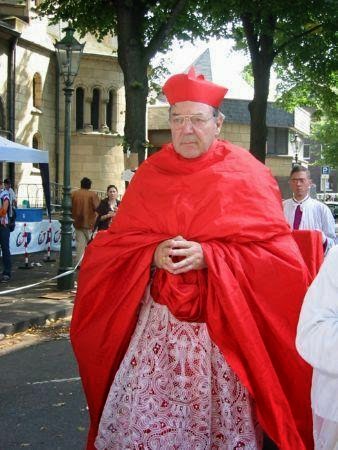 
Homily for the Mass of the 10th anniversary of Juventutem
during the Summorum Pontificum Pilgrimage
Church of Santissima Trinità dei Pellegrini
Rome, October 24, 2014

We Catholics have strange beliefs; our planet earth is like a grain of sand in an unbelievably vast universe and we believe God’s Son came to live on this tiny speck to teach us and redeem us.

We believe in angels, spiritual beings outside our physical universe; in Raphael one of the seven who stands before God, who brought Tobias healing and taught him the truth.

We want to know and love the truth and we hope to spread these truths, which are costly, but life-giving. We too want to be cured by Raphael as we come out of the troubled waters.

Tonight on your pilgrimage to the Urbs Aeterna we should remember St. Peter and St. Paul, founders of the Church in the city of Rome.

And on this occasion a few words on the Papacy would not be inappropriate because the Pope is the successor of St. Peter as head of the Church and bishop of Rome, and because the papacy is one of the most amazing institutions in history; the oldest surviving office or ruler. China did have an emperor a couple of hundred years before Rome had a bishop, but China has emperors no more! Hundreds of years before there was a King of England there was a Pope in Rome. Even in secular terms the papacy is extraordinary, but for us the Catholic religious significance is infinitely more important.

Peter’s office or role is well attested in the New Testament writings.

In chapter 16 from Matthew’s gospel, after Peter had affirmed that Our Lord was the Son of God, he was declared to be the rock man on whom the Church is built. Jesus is of course the only central figure in the Catholic dispensation, but Peter is the main foundation stone in the apostolic foundations of the universal church communion.

The Church is not built on the rock of Peter’s faith, as a popular hymn claims, but on Peter himself despite his faults and failings. It was Jesus who gave Simon the additional name of Peter, the rock man. In English the words “Peter” and “rock” have different derivations, but in Greek, Latin and Italian they are almost the same word. In this passage, Peter was given the Keys of the Kingdom and the power to bind and loose. The sense of this passage is not unique in the New Testament as in chapter 21 of John Peter is exhorted to feed the sheep and in chapter 22 of Luke he is commissioned to strengthen his brothers. He always heads the list of the apostles.

Over 2,000 years these theological foundations have been developed and changed. The Second Vatican Council (1962-65) set out to complete the work of the First Vatican Council (1870), by recognizing that as Peter was one of the twelve apostles, so the Pope is assisted by the other bishops throughout the world, forming the College of Bishops.

This college and all synods work by consensus and teachings and pastoral practice can only be changed by consensus.

Pope Francis is the 266th Pope and history has seen 37 false or anti-Popes. From the eighth to the nineteenth century the Popes ruled most of central Italy, an area known as the Papal States. For the last 150 years, plus or minus, the Church has been led by Popes, who were better, wiser, holier and more learned, than the historical papal average for the two millennia.

There were three particularly difficult periods; first of all in the tenth century when a succession of Popes were dominated by a local noble woman called Marozia; secondly in the 14th century when the Popes were based in Avignon, Southern France and were followed by multiple claimants to the papacy when they came back to Rome; and in the 16th century, the time of the Protestant Reformation and the Renaissance, when many of the Popes were formidable rulers and patrons of the arts, but none of them were over-interested in religion. (My comment: Is the good Cardinal implying we are in a similar time of difficulty concerning the papacy?)

Earlier on the role of the Popes was a significant factor in the final break in 1054 between the Eastern and Western churches, between Catholicism and Orthodoxy.

The role of the successor of St. Peter has always been vital to Christian and Catholic life, especially as a touchstone of doctrinal fidelity and as a resolver of disputes, pastoral as well as doctrinal.

Today we are inclined to judge communities, institutions and individuals according to the criterion of modernity. No one wants to be accused of being old fashioned and nearly everyone likes to be thought “up to date”. In the ancient world they didn’t quite think like that, and much public opinion tended to look back to golden ages, real or imagined. The early Christians’ questions were somewhat different, because they wanted to know whether the teachings of their bishops and priests were in conformity with what Christ taught. In an age before books and radio, long before you could look up information on Google, Christians used to ask what the churches founded by the apostles regarded as apostolic, genuinely early Christian teaching. Jerusalem, Antioch, Alexandria and Rome were such churches and Constantinople was added in the fourth century, although certainly not founded by an apostle.

Among those churches however, Rome had pride of place as the principal guarantor of orthodoxy, because both Peter and Paul had been martyred there and of course because Peter had been appointed the rock man by Christ himself. The apostolic tradition, announced first by Christ and founded in the scriptures is the touch stone for truth and genuine pastoral practice. Doctrine does develop – we understand truth more deeply – but there are no doctrinal back-flips in Catholic history.

Often our enemies recognize better than us the importance of the papacy. In every country where the Communists gained power, they tried to separate the local Catholics from the Pope into national, so called “patriotic” Churches. We know from Hitler’s table talk that if he had won the Second World War he would have set up a Pope in every Catholic country. Napoleon imprisoned two Popes, one of whom died in captivity. The story of the Popes is stranger than fiction, but the contribution of the many good Popes far outweighs the sins and mistakes of the minority.

Today we have one of the more unusual popes in history, enjoying almost unprecedented popularity. He is doing a marvelous job backing the financial reforms.

We all have an important task during the next twelve months i.e. to explain and build a consensus out of the present divisions. We will be counter productive if we have anger or hate in our hearts, if we lapse into sterile polemics against a surprisingly small number of Catholic opponents. Our task is to explain the necessity of conversion, the nature of the Mass, the purity of heart Scriptures requires to receive Holy Communion. We, and especially you young people, must live this in love, giving reason for your hope. This is a unique opportunity which we must seize in God’s name.

(My Comment: this above paragraph must be read by what the good Cardinal says in this video!):

So I conclude with the prayer I was taught as a child. “May the Lord preserve the Holy Father, Pope Francis, and give him life, keep him safe on earth and deliver him not into the hands of his enemies”.

Clearly Cardinal Pell is not afraid to speak the truth. And speak it without fear or compromise. Which means he will have a price to pay. And after seeing how the synod was manipulated I suspect that an effort will be made to discredit Cardinal Pell as well as Burke, Erdo, etc. dare I say we will soon see intense media coverage accusing the Cardinal of mishandling pedophiles in the priesthood.

And let's be honest every manipulation during the synod was known by the pope. He saw that first report which was given to the press before the bishops. It was written by his chosen representatives. He in effect wrote that first paper. The buck stops with him.

So if that first paper is what the pope really believes what do we do. He has no authority to change the doctrines of the church. And to allow Holy Communion to people in mortal sin without requiring amendment of life and confession contradicts the teachings of the Church. So a rational mind would have to demand that either the pope upholds the teachings of the Church or he resigns the papacy. There is no other choice. Francis cannot change or alter or approve "pastoral" practices which contradict Church teaching. He needs to make a choice. It really is that simple.