OH MY! IS THIS THE BEGINNING OF THE DEMISE OF THE SO-CALLED “BENEDICTINE ALTAR ARRANGEMENT” AT PAPAL MASSES? 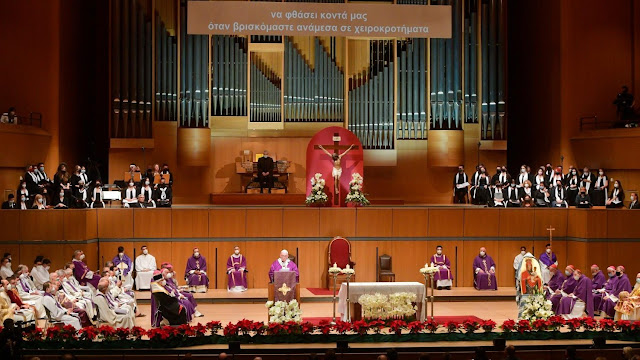 At the poorly attended papal Mass in Greece on Sunday, it was noted that the altar did not have the “Benedictine Altar Arrangement”. There were only four candles (on floor stands) and no crucifix on the altar facing the celebrant, in this case, the pontiff.
There was a large crucifix above the pontiff’s chair, somewhat distant from the altar and clearly not visible to him as he celebrated the Mass at the altar.
There’s a new sheriff in town as the papal MC. Do you think he finds having a cross behind the pope and one in front of the pope superfluous?
There is a new cross in Saint Peter’s on the wall of the apse in the “chapel” of the “Chair”. I have noticed that at papal Masses, since that cross was installed, the pope now turns his back to the papal altar and the crucifix on it in order to incense the new cross some distance behind him. Will we soon see all the candles and the crucifix removed from the papal altar in favor of no crucifix facing the pontiff during the Liturgy of the Eucharist and candles for the altar strewn around it on the floor?
Stay tuned.
Is this important or just one more sign of going backwards to the time prior to Pope Benedict?
Posted by Fr. Allan J. McDonald at Monday, December 06, 2021

A return to slobbism. No surprise

When will you acknowledge that the OF is a flop? Millions abandoned going to Sunday Mass and only 30 percent of its attendees believe in the Real Presence! Quite the Rite! The demographic sinkhole will seal its fate

When will you acknowledge that the OF is a flop? Millions abandoned going to Sunday Mass and only 30 percent of its attendees believe in the Real Presence! Quite the Rite! The demographic sinkhole will seal its fate

I hope he has not followed up on your suggestion!

I think the bigger issue, is that the pope or other celebrate (in many cases) sits directly behind the altar, in the center of the Church, generally in the place of the altar or tabernacle. Not by coincidnce, they fully believe they are the center of attetion, center of thier parish, and ost important thing in the room. Thats why we just move the annoying tabernacle somwhere else. No one believes that stuff anymore anyay.

MrMatt - I know of no priest think that he is the center of attention or the most important thing in the room, regardless of the position of the presider's chair.

That sort of spurious accusation makes those who make the claim look silly. Emmett Till was also the target of a false accusation, and while I don't think even the most radical traditionalist is going to go out and lynch those they falsely accuse of thinking that they are the most important thing in the room, I do think such assertions are damaging to the Church.


Don't bother with Father K who typically politicizes every thread, votes for the Party of Intrinsic Evil, and still won't explain why the OF is so great if only 30% of its attendees believes in the Real Presence. He is a lefty, big time

The official acceptance of the celebrant as 'presider' dates from Inter Oecumeni (October 1964). Before this time, when the priest turned to the people he kept his eyes downcast. Henceforth he eyeballed the congregation throughout most of the Mass, even positioning his chair so that he could do so during the readings which were usually delegated to a layman.

Whether or not he saw himself as the centre of attention is immaterial. But such a shift in the dynamics of the Mass which included the almost universal adoption of versus populum celebration was obvious to all (as it was designed to be). Before the introduction of a radically new missal in 1970, the groundwork had been laid in most parishes.

Not seeing onself as the center of attention is VERY material to the proper celebration of the mass. Any priest who thinks he is the center has been ill-formed and needs to come to a much deeper, richer understanding of his role.

Priests who DO think they are the center of attention are the ones who go off the rails, changing the homily, an integral part of the liturgy, into a stand-up comedy act. Or they present their own unsupportable assertions about the "evil" of women wearing pants, the danger of reading Harry Potter books, the absolute necessity of 51% beeswax in church candles, or some other Fr. James Altman-esque nonsense.

Yes, the priest's understanding of his role is very material.

Progressive priests are more prone to want to be the center of attention. It could be a kind of intellectual snobbery, or an exercise in acting abilities or thinking one’s English translation of the Mass is superior to the current glorious English translation. But, watch this and give me Fr. James Altman anytime!

When will you accept the OF has failed? 30 percent of attendees believe in the Real Presence

Fr. ALLAN McDonald, there are passages in the so-called glorious translation that are, for American ears, just pain cumbersome, that don't get an idea or concept across as well as they could. You've said so yourself to me, so don't go all High Horse in your attempt at condemnation.

And you're not a Fr. Altman fan, you've also said there here on this blog. So, again, don't go pretending to be one of his cheerleaders.

Mickey Kavanaugh sez: You need to be a 'presider' to understand what it is to be 'eyeballed'. Actually, if a lecturer avoids eye-contact with his audience, he is a poor lecturer.

I'm coming to the conclusion that MK is intellectually inferior to the eponymous cartoon rodent.

Blogger Fr. Michael J. Kavanaugh said...
MrMatt - I know of no priest think that he is the center of attention or the most important thing in the room, regardless of the position of the presider's chair.

Sadly, I think your are correct. Perhaps they are so ignornant of the power of God and his majestesty that no priest thought anything of it as they toted the tabernacle off to some back closet to put his chair in its place.

MrMatt - Again, you make an assertion, "Perhaps they are so ignornant of the power of God and his majestesty..." that has no purpose other than your own spleen venting.

I know of no priests who are ignorant of the power of God. Do you know any?

Johnny, you can conclude whatever you like, it's of no importance to me. Presiders aren't lecturers, so what they have to do with it I can't imagine.

As long as you stay trapped in a world where you presume that those who do not share your preferences are "intellectually inferior" to you, you'll continue to be a sad, disgruntled, and supercilious man.

So long as you are trapped in a world you choose by voting for the Party of Intrinsic Evil why would a faithful, practicing Catholic listen to anything you post? You should be posting at Evil Central, the DNC!

Mickey, give it a rest. You've nothing original to say, and your indulgence in crude sarcasm isn't clever.

Johnny - Give it a rest. England isn't the best country in the world, Latin isn't the best language for Catholic worship, "compatriot" isn't limited to meaning just those who come from the same country as you, and those who happen to disagree with you aren't automatically inferior.

As for being crude, do tell us again what, given your proclivities, you plan to do with those altar candles.

Mickey - Wrong on the first three counts, right on the fourth. Inferiority isn't automatic, it has to be demonstrated. You do this admirably without any input from me.

Anyone who asks rhetorically where he should put a candle invites a stock response on the lines of 'you can put it where the sun don't shine'. Crude? Undoubtedly.

Here's something Fr. Mikey can be proud of - he supports this Party with his votes:

California is considering funding abortions for out-of-state women as part of a 45-part proposal to expand abortion accessibility if Roe v. Wade is overturned.

The California Future of Abortion Council, started by Gov. Gavin Newsom, a Democrat, and made up of abortion providers and advocacy groups, published recommendations “to protect, strengthen, and expand abortion care in California” in early December. Toni Atkins, the San Diego Democrat who leads the state Senate, helped to develop the recommendations, according to The Associated Press.

I think Newsom is allegedly Catholic

I think most of us are tired of corrupt, ignorant, priests who should be baristas at Starbucks instead of haunting our Churches.