WHEN A CONGLOMERATE BUYS OUT YOUR LOCAL NEWSPAPER! 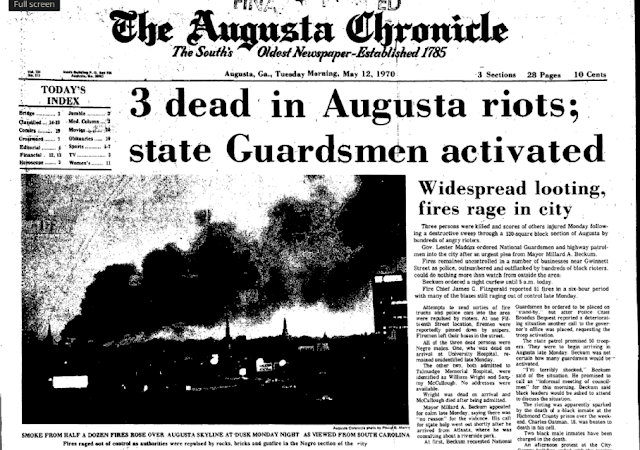 In the front page photo of Augusta’s riots in May of 1970, my future parish of the Church of the Most Holy Trinity is the steeple on the right side of the photo. I was in the 11th grade when this occurred but living in the suburbs where we were not affected except for closure of schools and nighttime curfews. I also worked at the Dairy Queen at that time on the opposite side of town from where I lived with my parents.
Since I grew up in Augusta and still feel an affinity for it, I get the local paper there which has been in existence since the 1700’s and is touted as “The south’s oldest newspaper”. It is the Augusta Chronicle.

Up until a few years ago, it was locally owned by an Augusta tycoon and media giant. He owned the Augusta paper, Savannah’s paper, Palm Beach’s paper and many others through the country. He owned TV stations away from Augusta too.

Then he sold it to a company outside of Augusta who almost immediately was acquired by USA Today!

The paper is horrible now, although I continue to get it on line.

But get this, on Christmas Day, there was no print edition or on-line edition.

And get this, today, New Year’s Eve, there is no paper.

It’s the end of the world and local news as we new it. And yes, USA Today pushes ideologies alien to southern and Augusta culture. Unbelievable.

Newspapers are dying a slow death. Mine is likely the last generation that will read them. I'm old enough there were still morning and evening editions when I was a kid. Shame, however, like many, I get the majority of my news online in addition to a daily print copy. I guess that also makes me part of the problem.

Then check out the happenings on the North Coast of the USA: https://www.wtol.com/amp/article/news/local/walleye-drop-returning-to-in-person-event-this-year/512-3d3135d8-9d67-49df-ac1c-ca0a6d681d7c

My sour grapes about the Augusta Chronicle stems from the fact that I assisted my brother when I was 8 and 9 years old as a “paperboy” for this company’s afternoon edition which was called The Augusta Herald—a 7 day a week job! On Sundays my father got us up at 1 AM to fold the papers and get them to our customers and we were home by 5 AM and a Low Mass for Sunday at 8 AM!