Yes, Virginia, the Ordinariate Mass is very much a post-Vatican II Mass, that actually follows Sacrosanctum Concilium. Will it's ethos be extended to the rest of the Roman Rite? This is a third usage of the one Latin Rite, it is not a seperate rite. For us normal Catholics, the current post Vatican II Latin Rite Mass could follow the set up of the Ordinariate's Roman Missal. Allow for the PATFOTA, make the Missal look like the 1962 Roman Missal as does the Ordinariate's; restore the older Offertory Prayers as an option, the tripple Domini Nom Sum Dignus and restor pre-Vatican II rubrics to the Roman Canon and other areas of the Mass--this would still be a post-Vatican II Mass! 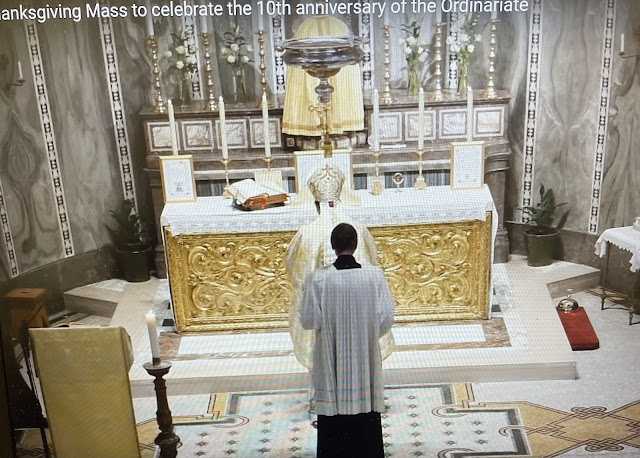 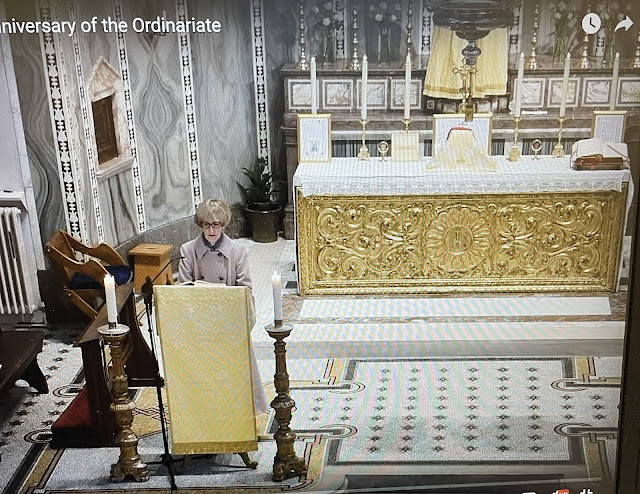 Those who desire the older form of the Mass, now known as the antecedent Mass, are a small group of mostly young people. They don’t long for the pre-Vatican II Church, they long for beautiful liturgy that brings them inspiration and enables them to contemplate the magnificence of God. They want clarity from the Church to help them to live Catholic lives in an inhospitable environment. They want many children and don’t want the Church to marginalize them as the culture does.

And this small group—they get canceled by the highest human authority in the Church. And in doing so, this high authority shows a duplicity and hypocrisy when it comes to His Holiness’ agenda of accompaniment, listening and welcoming inconclusivity. You just can’t make this stuff up unless you have bought into the “spirit” of Vatican II hook, line and sinker.

But I admit, that for most Catholics, Custodes Traditionis or “cussing tradition” is not even a blip on their radar screen. Most Catholics throughout the world don’t attend Mass, so they don’t care one way or the other. And that small percentage who still regularly attend Mass are about 5% to 25% of the Catholic population, depending where you live. More conservative dioceses and regions have a higher Mass attendance, which should tell the powers that be, something!

But my greatest sadness is based on what I personally thought Summorum Pontificum would lead to, a return to one post-Vatican II Latin Rite Mass that actually followed the conservative agenda of Sacramentum Concilium.

What would that have been? Noble simplicity (but qualified and explained better then it has been or experienced), loss of useless repetition, like the many refrains of the Responsorial psalm or hymns with refrains, some vernacular while maintaining Latin for the majority of the Mass—like the Liturgy of the Word in the vernacular or the changing parts of the Mass.

Also priests who celebrate the older form of the Mass bring the dignity and ethos of reverence to their manner of celebrating the post-Vatican II Mass. I hate that this will not continue with newly ordained priests being allowed to celebrate liberally the older form. That bud has be nipped!

I also thought the Propers would once again become mandatory in the post-Vatican II Mass. The Benedictine altar arrangement would be canonized for Masses facing the people but ad orientem would become the norm. And kneeling for Holy Communion and at the altar railing would be reestablished.

I also prayed for clarity of liturgical roles and that the laity not be clericalized at Mass and the clergy laicized.

But most of all, I hoped that SP would lead to a predictable Mass where you knew what you would get and there were no “gods” of surprises contained in it.

But alas, cussing tradition will prevent Pope Benedict’s agenda in the short run from being established but I pray not in the long run.

There is a great article by a French priest today at Rorate. Here is the money quote:


"Ecclesial paradox: Pastors are invited to develop a pastoral care of “accompaniment,” open to all moral and psychological situations. They must practice an unconditional welcome—but there is a part of the people of God to whom this benevolent welcome is obstinately refused. The setting up of a real liturgical apartheid (no traditional Masses in the parish churches, no doubt for fear of contagion or bad example!) shows the face of a suspicious, stepmotherly Church, to which one must present one’s papers under penalty of being excluded. The traditional faithful must look for a cave, since there is no room for them in the inn... In short, what a merry Christmas!"

I would say that the profound shortcoming of this document (aside from coming off as desperate) is the ease with which the next pope could cancel it out thereby advancing whatever his agenda might be. The precedent has been set. Is this how the Church will be governed going forward? I certainly hope not as it just serves to alienate more people in addition to watering down the quality of priests, bishops and cardinals that will make up the pool of "papabiles". Imagine how the Church will pull itself apart if, every 10 years on average, a successor changes everything to his liking perhaps having a circle of retired popes in rocking chairs watching it happen as mutes. Bizarre to think about.