A BACK HANDED COMPLIMENT (THE NCR SHOULD BE EMBARRASSED BY THIS KIND OF STEREOTYPING TRIPE!)

Here’s the NCR’s photo of the EF Mass that accompanies the article below that Link! It is to laugh of course! 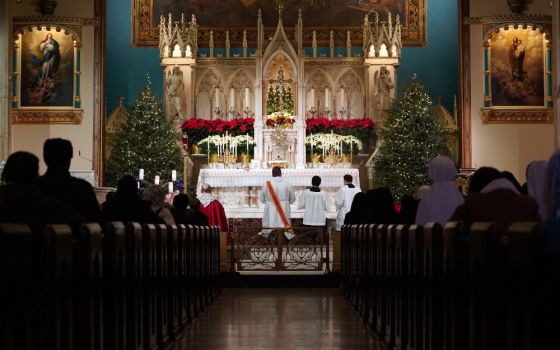 The NCR (the Chismatic one) is just plain dumb, to be polite. But I think the older Mass is a form of liturgy that helps Catholics to be more humble, interior oriented and reverent. Some might call this type of formation autism, Asperger’s syndrome or introversion. Certainly, though, those who attend the EF Mass, while completely universal in make up and younger than most OF Mass goers, creates an environment of silence, contemplation and reverence. Is that a bad thing?

Here is a money byte though, that could make your autistic blood boil:

I attended Church of the Holy Innocents, New York City's main hub for Tridentine Latin Mass enthusiasts, on and off since my undergrad days. Many, including Pope Francis himself, have expressed concerns that parishes that celebrate the Latin Mass tend to attract reactionaries who are opposed to progress and give rise to insular communities.

As much as this is often the case, and I applaud Francis for taking this step, my experience has shown me that there are other, more nuanced reasons people are drawn to the Tridentine Latin Mass. Yes, many are drawn to it for ideological reasons. But the Latin Mass is also a haven for those who feel misunderstood or outcasted for their unconventional personalities and aesthetic sensibilities.

"There's something to the idea that personality typing impacts the way one chooses to worship," says Catholic psychologist Ellie Rose. She points to the correlation between the Myers-Briggs Type Indicator and the four temperaments [choleric, melancholic, sanguine, phlegmatic], which "get a fair bit of attention in the Catholic world."

Do you think everyone at Latin Mass is an ideologue? You might be wrong.

Commentary: I would caution detractors of the Latin Mass to take a step back and look at the other reasons people are drawn to this particular liturgy. Those who feel outcasted or alienated from parishes that only celebrate the ordinary form, including myself, deserve to have their sensibilities and experiences taken into account.

I have always disliked the English Mass and the tawdry music which usually accompanies it, not to mention the slapdash way in which it is usually performed. I stand with Evelyn Waugh, Graham Greene, JRR Tolkien, David Jones, and countless men and women from the 1960s to the present day who were and are far more erudite and accomplished than I am, but are of the same mind.

The idea that we can all be categorized by pretentious post-modern psycho-babblers beggars belief.

They should encourage the Latin Mass inthe EF and simply arrest every who leaves after Mass.