WHY WAS THE FORMULA FOR OFFERING HOLY COMMUNION TO THE LAITY TRUNCATED BY POPE PAUL VI (NOT THE SECOND VATICAN COUNCIL)? 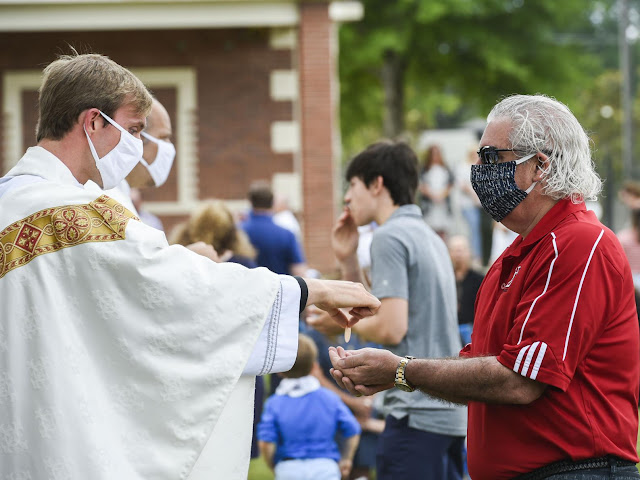 The new Mass that Pope Paul VI created with the help of a committee is far more open to clericalism than the Mass from which it offered various reforms. Some would call it deforms.

One that puzzles me greatly and it is clearly clericalism, are the words the priest in the created Mass after Vatican II uses for his Holy Communion and the one he uses or (any person chosen to distribute Holy Communion) which is clearly truncated.

In the ancient, organically developed Mass of the centuries, the formula for receiving Holy Communion is identical (with the appropriate pronoun changes) for priest and laity.

The priest makes the sign of the cross with the Host and then says this to himself as he receives:

In the new created Mass, the Latin phrase for the priest is adjusted but longer than for the laity. The priest, without the Sign of the Cross, say, “May the Body of Christ keep me safe unto life everlasting.” But, not so for the laity, it is simply “Body of Christ” with their “amen”, which is rather crass when you stop and think about the truncation of it for the laity. And no “Sign of the Cross” prior to giving the Host—I guess that opened distribution of Holy Communion by the laity.

Clearly in the new created Mass, a truncation and reform of the EF Mass, the laity don’t even deserve the revised longer formula the priest uses for himself. Sad!

With the EF’s formula for the laity, if it is so important for the laity to respond, then the Amen could have been their response—simple enough, no?

“Corpus Domini Nostri Iesu Christi custodiat animam tuam in vitam aeternam, Amen,” which in English means “May the Body of our Lord Jesus Christ preserve your soul unto life everlasting. Amen.” Because the priest says “Amen,” there is no need to respond to him as you await reception of the Sacrament.

The formula 'Corpus Christi, Amen' was adopted in 1965, two years before the Roman Rite was to all intents and purposes destroyed, and five years before the Novus Ordo was imposed. Perhaps the Consilium were envisioning lay people giving out Communion at some future date.

I think your speculation is correct, John. I don’t know if the priest shortage was already known or even forecasted at that point, but soon after the fleet of EMHC arrived.

My father was incensed by Holy Communion in the hand. He said to me that what’s next: Communion r-ctually? Keep in mind he was a committed Catholic, lost his hand in Korea, and was a faithful, practicing Catholic. I don’t think most clerics understood how detested the “reforms” were. They still don’t. Empty pews and smaller collections should give them a clue. If the Church was as successful as it was in the 1950s we would be building more churches and schools and collections would be up big time!

The parish church which I attended from age 11 was not simply 're-ordered', but actually rebuilt between 1964 and 1966 in a very plain modernist style. The new church did have a built-in altar rail and until 1976 Communion was received in the traditional manner. In that year CITH was introduced and sold by the bishops as a return to earlier practice. Hitherto there had been no demand for it.

The main problem for English Catholics was the vernacular, which in my parish and in most others had entirely replaced Latin by 1967. Some liked it, others loathed it, and the majority were bemused and confused at the constant stream of changes. The perspective here was not the same as in the USA. For over 400 years a Protestant Church, 'by law established' had occupied all the medieval cathedrals and parish churches, built for Catholic worship with Catholic money. The Church of England in the 1960s still had a dignified English liturgy embellished by decent music and stately ritual.

What it didn't have was the Mass, and the Latin Mass was an important badge of Catholic identity. In the 1970s Indult Masses in the old rite were rare. The Association for Latin Liturgy (founded 1969) published a booklet listing all the Churches which used Latin in the new rite, even if it was confined to the sung Ordinary. I kept it in my car.

In those years there was another threat to tradition; hand-pulled traditional beer (real ale) was rapidly disappearing from our pubs. The Campaign for Real Ale (CAMRA) published an annual 'Good Beer Guide' which was also an essential 'vade mecum'. CAMRA was astoundingly successful. Real ale is in every pub now, and many small breweries provide an astonishing variety.

I wish the same could be said for real liturgy. We didn't campaign hard enough. What was needed in the 1970s was a 'CAMREL'.

Real ale! I vividly recall my first encounter with it in a pub near Cirencester. I had never cared for beer, only knowing American mass produced lagers. But we were asked to toast some departing comrades and, not wanting to be rude, took a glass of the local ale for the occasion. It was actually startling as how smooth and sophisticated the flavo(u)rs. I asked the bartender what it was and he explained it was a local ale. Totally changed my ability to enjoy beer from that day forward.

I suppose the American equivalent of real ale is craft beer, brewed by independent breweries in a range of styles. The term has recently gained currency over here to describe real ale in a bottle. The alcohol content is often higher than the draught version, so it pays to read the small print on the label!

Draught beer is top-fermented and barrel-conditioned, and shouldn't be served too cold as it impairs the flavour. Temperature-controlled cellarage means that warm beer is a thing of the past, despite what the French still believe. (To get a decent pint in France you have to drink a Belgian beer such as Leffe or Grimbergen.)