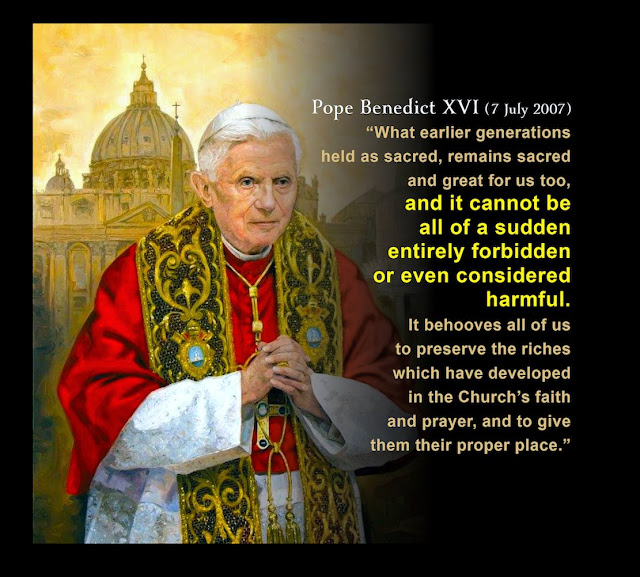 This is from “Catholic World Report” (press title for full article) money byte below:

Traditionis itself showed almost every imaginable sign of haste in its composition, making it very difficult to understand. Indecipherable where it was not self-contradictory – as it was in almost every operative or dispositive part – the law was therefore frequently impossible to obey.

Suffice it to say Traditionis did not go over well, even in quarters broadly well-disposed to its purported goals and aims, which were (and are) the complete suppression of worship according to the ancient form of the Roman rite, in favor of the new order of worship Pope St. Paul VI first promulgated in 1969.

It’s hard to offer a straight report and analysis of the responses’ contents, and hard to resist the temptation to psychologize them, mostly because of the snark and pettiness that bleeds through almost every syllable. This Vatican-watcher will attempt the former, and apologizes for any excesses regarding the latter.

Trying to make some sense of the responsa ad dubia

The responses to dubia published on Saturday make one wonder whether the haste was only apparent, and the sloppiness of the original a feature rather than a bug.

TC and the dubia is the work of tired, intellectually and morally bankrupt losers. This papacy has sunk to a new low. Best to look forward to the future

Benedict XVI is still alive! Is the the current HF's Waterloo?

A few words regarding Quo Primum:

Legal expressions such as "which shall have the force of law in perpetuity, We order and enjoin under pain of Our displeasure that nothing be added to Our newly published Missal, nothing omitted therefrom, and nothing whatsoever altered therein" cannot be literally interpreted as binding on possible later actions of Pope St. Pius V or upon his successors. The strictures fall only upon those who act without due authority.

If it were otherwise, then Pope St. Pius V would have excommunicated himself a couple of years after publishing "Quo Primum" when he added the feast of Our Lady of the Rosary to the missal following the Battle of Lepanto in 1571, not to mention Pope Clement XI who canonized Pius V in 1712, thus altering the missal.

Among the many other Popes who would have thus incurred "the wrath of Almighty God and of the blessed Apostles Peter and Paul" would have been St. Pius X for reforming the calendar, Pius XI who added the first new preface in centuries for the feast of Christ the King, Pius XII for completely revamping the rites of Holy Week as well as simplifying the rubrics, and Blessed John XXIII for adding St. Joseph’s name to the Roman Canon."

Quo Primum is an expression of liturgical regulation. Therefore, unlike a definitive expression of doctrine, it is not - and cannot be - binding in perpetuity.

Are you ever going to get around to explaining if the OF is such a big success, why is it that only 30% of its attendees believe in the Real Presence? Or is that a feature, and not a bug, to you?

Il Papa acts as though he has the tradition at his disposal to do as he pleases - rather than seeing himself as the custodian of it. Instead of guardian of deposit of faith, he acts as the manipulator of it. Makes the document title ironic - proves that the Holy Spirit has a sense of humor.

The quotation from Fr McNamara, which Fr MJK usefully draws our attention to, was published in full as part of an article by Shawn Tribe in New Liturgical Movement, which appeared in 2006. It acts as a corrective to those 'traditionalists' who interpret Quo Primum in an over-absolutist way. It also acts as a corrective to 'progressives' who maintained, and in some cases still do, that the effect of the Tridentine reform was to leave a liturgy preserved in aspic, as it were, and incapable of further development.

Tribe makes an important caveat. While acknowledging that the Pauline missal was issued with the same papal authority as the Pian one and is both valid and licit, this must be counterbalanced by the fact that the liturgy should not be subject to arbitrary judicial authority, and that deference should be made to organic development and the objective nature of the liturgy as primarily received, not conceived.

This is backed up by quoting Ratzinger in his preface to Alcuin Reid's 'The Organic Development of the Liturgy'.

Father Z is on a roll today:

"The Bergoglians – papalatrous and fervid – are today doing exactly what their progressivist counterparts in the 1970’s did: they accuse “rigid” bishops of “not getting with the groovy program, man.”

Back then, the progressivist fear was that young people were rejecting and fleeing the Faith. Changes had to be made! It was necessary to get rid of all sorts of things that no one wanted to get rid of, despite the fact that the Council Fathers commanded that they should be kept.

Now their Bergogliatic fear is that young people are rejecting the progressivists’ cult and are seeking the cult of their forebears.

The Bergoglians are so Pelagian, so self-absorbed in their personal agendas that they are blinded to the fact that the Faith really can’t (unlike certain other of their interests) be shoved down people’s throats!

Ironically, in the sunny Bergoglian fields of the Vatican II springtime that perennially-promised fruit of the Novus Ordo, attracting young people, is at long last ripening…

… wherever young people can find a Traditional Latin Mass."

Off topic, but I hesitate to post this because it may give the liturgical left in the Church ideas:

An openly gay and newly ordained pastor [Lutheran Church in Chicago] dressed up to lead a Drag Queen Story Hour-style message for children, causing among parents outrage across social media.Pastor Aaron Musser dressed in full drag, sporting a long white dress emblazoned with a golden cross, a blonde wig and full makeup.The pastor asked the children in attendance if they had ever seen a drag queen before.The kids responded "no.""I have an awesome story to share with you today," Musser said."I am also a boy most of the time when I'm here, but today, I'm a girl."

Kids love it, and it doesn't confuse them about their sexuality.

Seems like the point to Quo Primum is that it allows for changes but does not allow for the abolition of the attempted abolition of beliefs and practices accepted as approved and holy by the Magesterium. So what this pope is doing is not lawful and therefore should be the first point brought against him when the successful nullification of his papacy is conducted 1 day after his death.