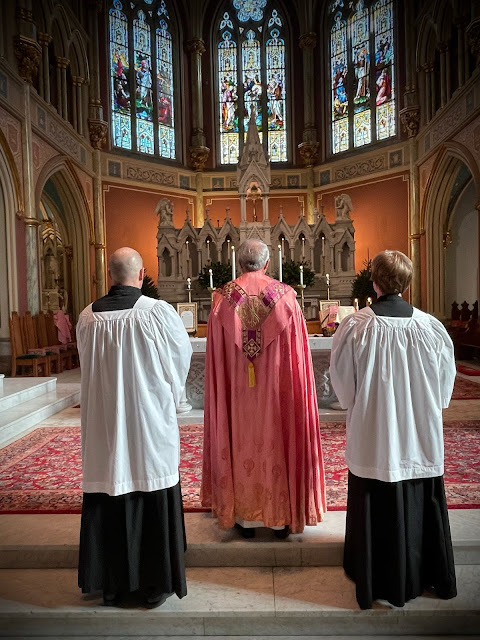 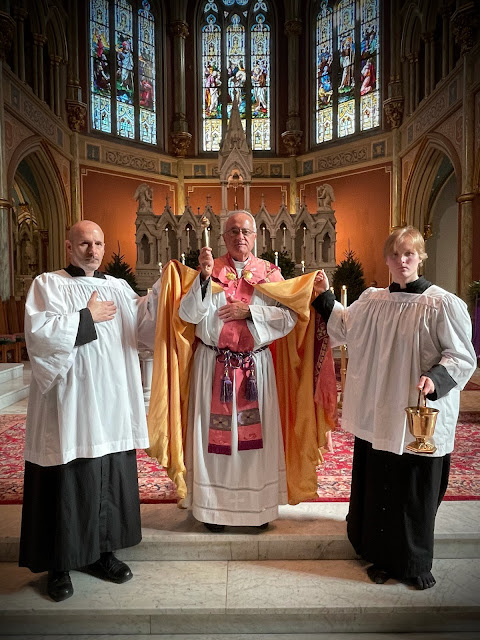 Da cope was returned to the Cathedral after  a 30 year hiatus. Of course, I am speaking about da pink cope, which many call rose. It can only be used two times a year, if that, meaning on Gaudete Sunday and Latarae Sunday. In the EF tradition, it would be used only at a parish’s principle Mass for the asperges, or for Solemn Morning or Evening Prayer (seldom offered in a solemn way today) or some other liturgical function on those two Sundays. Thus the cope shown above was no longer used at the Cathedral in 1991 by the Cathedral’s bishop or priests.

Thus, a person on the cathedral staff, who knew me well and my liturgical proclivities, as I had been stationed there from1985 to 1991, gave me what wasn’t his to give or mine to take. He gave me da  pink cope to take with me to my new assignment at the Church of the Most Holy Trinity in Augusta to which I was assigned from 1991 to 2004. I used da pink cope a couple of times there.

The I took it to Saint Anne in Richmond Hill (2016 to the present and a bit beyond) where I have never used it.

And then, a bombshell. I was assigned to celebrate the Cathedral’s 2021 Guadete EF Mass this past Sunday. When I saw that I was scheduled, I said to myself, “self, it time to return stolen goods back to the Cathedral!” Thus I informed the EF’s MC that I was returning da stolen pink cope to the Cathedral, but that we had to use it for the purpose it was purchased, more than likely in the 1940’s, which is for the Asperges prior to the Holy Sacrifice of the Mass.

And thus, da Cathedral’s stolen pink, which I knowingly received as stolen goods, was returned to the Cathedral in reparation for those who would not use it, because of da color, which led a good “brother” to steal it and give it to someone, who gladly accepted stolen good, who would use da pink.

And now the Cathedral is back in da pink! 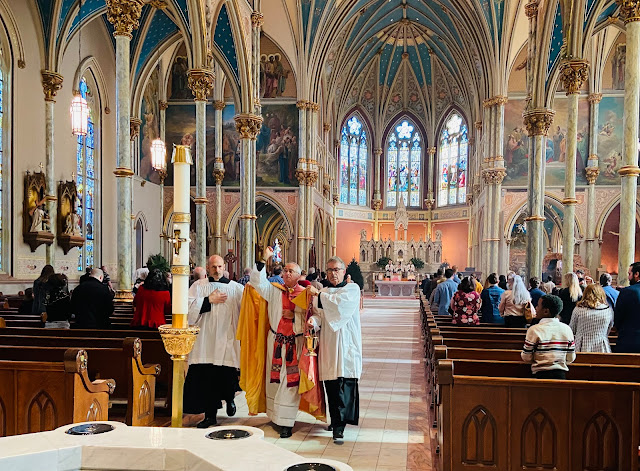 Good story! Probably made for an interesting confession. 😉

I must ask, what does the acolyte with the bucket have on his feet?

The rose cope is gorgeous. Unfortunately at my parish in the 1970s it did not meet such a happy ending.

I note the presence of a young, African-American boy is in the back pew. Does he understand that PF would not be happy with him attending the EF?

Off topic, but I think you will find this interview quite interesting:

Feet and toe shaped shoes…at least these are covered which I can’t say for certain clerics!

You may need to know this:

I saw an article the other day advising that cardinals can, on Laetare and Gaudete Sundays, wear rose cassocks and other items that would normally be red.

Keep this in mind for when you are made a cardinal!