A MUST READ ARTICLE 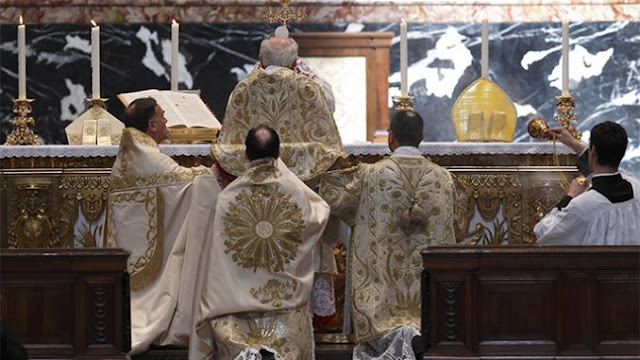 Legislation cannot change historical facts. Nor can an act of legal positivism determine what is or is not part of the lex orandi of the Church.

Press title above for full, lengthy article. This is an excerpt:

St John Paul II’s election in 1978 sought a stricter implementation of the reformed liturgical books – abuses were strongly denounced – and in 1984 a limited permission was given for the usus antiquior as a means of healing divisions that had hardened under Paul VI. This permission was widened in 1988 in response to Archbishop Lefebvre’s unlawful consecration of bishops, and, significantly, because the Pope recognized the “rightful aspirations” of those attached to the previous liturgical reforms. This recognition facilitated the formation of Institutes and personal parishes and other communities of which the usus antiquior was (and is) the lifeblood. The full, conscious and actual participation in the liturgical rites witnessed in these communities to this day – something of which the Council Fathers would be proud – has borne significant fruit ever since, particularly in attracting the young and in generating vocations to the priesthood and religious life.

Recognizing this reality and understanding the larger question of the need to address the rupture in the Church’s liturgical tradition, John Paul II’s right hand man for two decades, Joseph Cardinal Ratzinger, undertook two initiatives. As a Cardinal and in the capacity of a private theologian he wrote and spoke often about the need for a new liturgical movement to recapture the true spirit of the liturgy. And he spoke about the desirability of a “reform of the liturgical reform”, to correct the liturgical books of Paul VI as it were.

The former was general enough to cause no concern amongst the partisans of the missal of Paul VI, but the concrete proposal to retouch and improve the usus recentior was too much for them. Even after his election to the papacy, talk of a possible “reform of the reform” was forbidden within the walls of his own Congregation for Divine Worship, effectively blocking its progress. The opportunity lost by the rigid insistence that the liturgical books of Paul VI are irreformable may not be judged well by history.

As pope, Benedict XVI acted on his convictions and in 2007 exhorted the Church to a more worthy celebration of the usus recentior in continuity with liturgical tradition (Sacramentum caritatis). Some months later he established that the usus antiquior had its rightful place in the liturgical life of the Church and freed it from the parsimonious grip of the bishops who had, in too many places, sought to strangle it (Summorum pontificum).

As a result, the growth stimulated by John Paul II accelerated. Peaceful liturgical coexistence augmented many dioceses. Some mutual enrichment between the uses began to grow. Visiting bishops encountered young, vibrant, apostolic communities – sometimes in stark contrast to others in their diocese.

Were these acts of Benedict XVI contrary to the Council? For those of us too young to have been there it is difficult to say. We did not work daily with its Fathers, nor did we help draft its documents. Benedict XVI did. And he has dedicated his theological and episcopal ministry to its interpretation in a hermeneutic of continuity, not of rupture – which is surely the only valid way to interpret its reforms. So too, the discourses and documents of Benedict XVI reference the Council constantly, far more than those of his successor. That is not to criticize the Holy Father, who has his own approach, but simply to observe that Pope Benedict’s teaching was thoroughly Conciliar, even though by no means warped by the ideological belief that the Church (or a new Church) started at Vatican II. If Benedict XVI’s acts are seen as contrary to the Council, it is because they challenged and corrected this ideological “Council” and its progeny with historical and theological reality.

What is significant – and this was unexpected by many – is that the pontificate of Benedict XVI revealed him to be a gentle and fatherly professor, quite generous to those of differing views. He did not harshly sanction those with whom he disagreed. Rather, he sought to teach them, often by example. Liturgically, whilst himself celebrating the usus recentior well, he recognized and respected the importance of the usus antiquior in the life of the Church of the 21st century, and in particular its attraction to the young. The riches of diversity in unity were a reality in many dioceses, and were valued.

At Pope Benedict’s resignation it was unimaginable that any successor could rescind Summorum Pontificum. And yet that has now happened. Why?

As I have said many times, I am not a traditionalist. I am a Catholic. And as a Catholic I hold that the bitterness, fear, alienation, and growing division directly brought about by Traditionis custodes is a situation of the utmost grave concern. It is a source of scandal well beyond those whom it targeted and, pastorally speaking, is already a disaster – particularly amongst the young.

In the face of this, as a liturgical historian, I cannot remain silent. Legislation cannot change historical facts. Nor can an act of legal positivism determine what is or is not part of the lex orandi of the Church, for as the Catechism teaches, “the law of prayer is the law of faith: the Church believes as she prays. Liturgy is a constitutive element of the holy and living Tradition” (par. 1124) – of which the bishops, and first amongst them, the Bishop of Rome, are guardians, not the proprietors. For as one humble Pope taught when taking possession of his cathedral in Rome:

The Pope is not an absolute monarch whose thoughts and desires are law. On the contrary: the Pope’s ministry is a guarantee of obedience to Christ and to his Word. He must not proclaim his own ideas, but rather constantly bind himself and the Church to obedience to God’s Word, in the face of every attempt to adapt it or water it down, and every form of opportunism.

A highly intelligent and thoughtful piece, beyond the comprehension of the apparatchiks in the Vatican. Dum spiro spero.

There is also an excellent article at The New Liturgical Movement commenting on the Pope's "Christmas Present" to faithful Catholics. Here is the money quote:

“The pontificate of John Paul II produced a generation of Wojtylian priests, that of Benedict XVI a generation of Ratzingerian priests. The current pontificate has inspired no such school or movement. Gentlemen of a certain age, who had already taken hold of positions of power, have consolidated their power, but there is no ‘Bergoglio generation.’ This pontificate, with all its hangers-on, must recur to the use of force as its solution to the traditionalist ‘problem’, a force which conquers, but does not convince (vince ma non convince): repression and censure. Does the new rite as understood by Pope Francis, Abp Roche or Andrea Grillo inspire art, the spiritual life, or vocations? No? Fine, then we shall forbid the old one, and Ratzinger’s whole understanding of the problem. A senile, Brezhnevian Church, paralyzed and sterile, which continues to repeat the slogans of the 1970s ever more tiredly, will end like the power of the Soviet Union ended.”