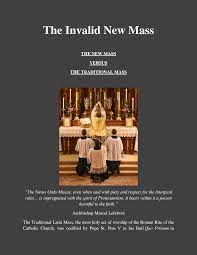 Philip Lawlor has an article on all those "millions" of TLM Mass goers who don't believe the Ordinary Form Mass is valid. You can read the article HERE, but here is the important point:

Catholics who attend the traditional liturgy (TLM) regularly constitute only about 1% of the world’s overall Catholic population. If 1% among those traditionalists reject the Novus Ordo (and I think that estimate would be far too high), then the problem is confined to a barely visible minority.

Yet among Catholics who attend Mass regularly in ordinary parishes, an overwhelming majority reject the validity of the Novus Ordo liturgy!

Poll after poll shows that more than 70% of Catholics do not believe that Jesus Christ becomes truly present—Body, Blood, Soul, and Divinity—at the Mass. But if Jesus is not present—if the Eucharist is not confected—then the Mass is not valid. Therefore most worshippers at an ordinary Catholic parish believe that the Mass is invalid. QED.

Why isn't there any real concern about how poorly the modern Mass is celebrated and how few actually believe what the Church teaches about the Mass? Why are only 5% to maybe 20% of Catholics attending Mass, meaning there is not "actual or active or even passive" participation!?

I have suggested ways to improve the Ordinary Form Mass to make it more reverent for the actual participants who are there. My suggestions were not well received! O the misery of it all.

I have suggested some rubrical changes for the Mass when celebrated at the altar. Many don't think these are kosher.

Will there be "Partie Trois" on CT where even kneeling for Holy Communion and ad orientem will be bashed, marginalized and phased out as soon as possible, to make the recovery of the 1970's complete.

Is that a kosher question to ask?

The Holy Father is still scheduled to have the baptism of small children in the Sistine Chapel for the Feast of the Baptism of the Lord, January 9th. Now that Msgr/Bishop Guido Marini isn't there anymore, will they place a free standing altar in front of a perfectly good altar for the pope to celebrate Mass facing the people since he objects to ad orientem and publicly smacked down Cardinal Sarah over it although His Holiness has celebrated this way many times in the past.

Is that kosher to ask?

It's kosher for you to ask as it's your blog. Ask anything you like. I perceive, perhaps incorrectly, a tone in your post, so all I'll say is if you don't want responses different from what you intend, either don't ask, or filter what's posted.

Separately, I suspect any and all is subject to review, modification, or abolition between now and when the HF goes off to his heavenly reward. I, personally, would go about seeking unity around the sacraments in a more benevolent manner than the HF, but, that's his decision to make. Let's just hope that between now and then, too much more unproductive damage (my judgement) isn't done for the sake of pseudo unity for as you suggest, many NO attendees don't believe in the actions taking place there anyhow. I take comfort how easily a successor can yang cancelling out PF's ying. Terrible way to legislate, however.