THE ARCHDIOCESE OF CHICAGO’S SAINT SABINA’S CHURCH AND SAINT JOHN CANTIUS CHURCH—DEAR GOD SAVE US FROM WHAT IS INCREDIBLE! 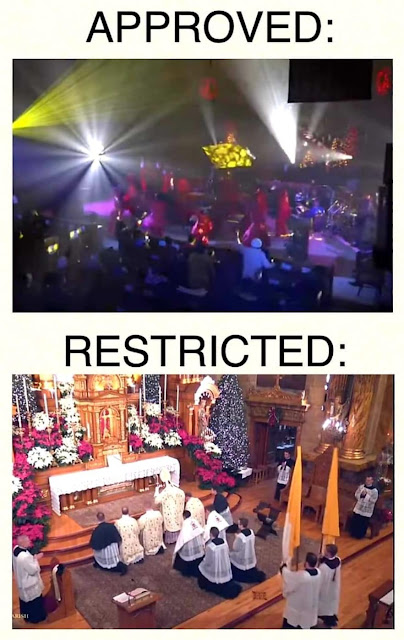 Pure evil is on the lose in Chicago - glad I am no longer a member there. Before I knew we were moving, I received the Cardinal’s annual appeal. I wrote back and stated I would donate once a Catholic archbishop is installed

TJM, you know better than that, you can respectfully disagree but your negative comments that go against the 10 commandments lead others away from commenting here. Can’t you rise above your sun in this and turn the other cheek?

All I'll say about this is that I am unable to enlarge the top photo to the point of being able to recognize it as anything in particular, certainly not mass.

I think you had it right when you said "your sun."

There are peope who think the (Catholic) world revolves around them.

You always must have the last word

I am very sorry you feel that way, but I call a spade a spade. Cupich will accompany men who have sex with one another but not faithful, traditional Catholics.

Perhaps consider not saying the "knowns". Often, just being engaged with the Church, warts and all, we know, we can solve for "x". Not every response has to be "I told them" type of statement.

Not that I want a pat on the back for doing so but, consider wishing the group a blessed Nativity, offer your congratulations to the newlywed couple who both serve their country, things like that. Constant negativity from anyone just sucks the life out of those who surround them, virtual or real life.

I understand that which you are fighting against and for btw.

I am older than you and grew up when the Catholic Church was a great universal Church. I lived through the torments of the 1960s - 1970s. Blessedly John Paul II and Benedict XVI began to right the barque of Peter and I began to experience peace again then the Peronist took over and the pain has returned. The hypocrisy and injustice of this papacy is almost too much to bear

On a lighter note, one of Father Z's readers thinks we should thank Father Pflegher:

"Those who prefer the traditional Latin Mass in the Archdiocese of Chicago should be thankful to Fr. Pfleger for showing how to faithfully implement Traditiones Custodes.

After all, Pope Francis addressed such “eccentricities” in the accompanying letter.

If Cardinal Cupich is ok with completely making up 90% of the prayers of the Mass, what grounds does he have for objecting if a priest expressing no worse fidelity to the Novus Ordo happens to improvise in a manner that perfectly matches the 1962 Missal?"