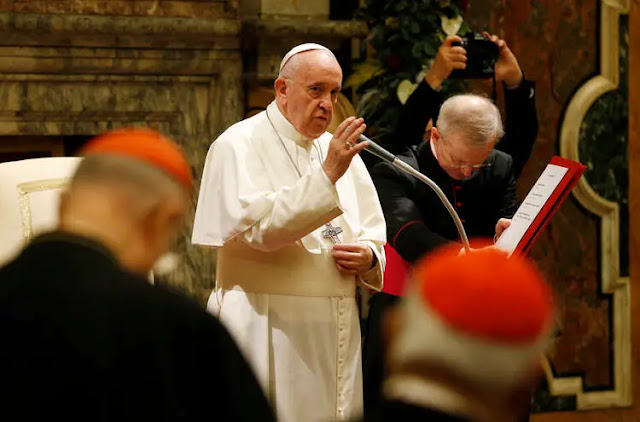 In speech to Curia, pope warns against worldly attachments, including in the liturgy

I wish and pray you have a blessed Christmas and a happier New Year than we been having lately. Thanks for all you do on this blog to improve the prayer life of Catholics everywhere.

Good - I am not attached to the OF does that mean I can give it up?

I really wonder if the Holy Father is firing on all cylinders because the logic behind what he just said would imply that we should not be attached to the Ordinary Form, inculturation, lay participation and the new wave of anti-clericalism which is actually anti clergy/laity dichotomy. Let's clericalize the laity and laicize the clergy!

Perhaps PF's suggestions also includes the Petrine ministry? If we shouldn't attach ourselves to the liturgy, the source and summit of all that we need, why then would we attach ourselves to a man who was elected by men despite the supposed inspiration by the Holy Spirit?

A bit of a disappointing lecture 2 days before the Nativity Feast.

ByzRus, I really wonder if the pope's speech writers or those this Pope passes his speeches to be evaluated have it in for this pope. This elocution is so problematic on so many levels it is quite embarrassing to say the least. It truly is unacceptable because of all the various conclusions we can justify because of this faulty speech. It is ridiculous.

Maybe the Pope is declining both physically and mentally. He also had surgery recently so perhaps he is working off the mental fog which comes from anesthesia

At this point I feel like I’m just complaining. I also feel like Pope Francis is dealing a lot of personal burdens to behave and lead as he does. We need to focus on the college of Cardinals and the rest of the bishops to fix this.

The National Catholic Register has an interview with Archbishop Roche on his clarification. The man is arrogant and the epitome of clericalism. And at this point, this pope is the king with no clothes. It is sad to witness.

Roche is a careerist. He was supportive of Pope Benedict’s liturgical agenda and then changed his tune with the new management

It's refreshing to see how fed up you are getting and how you are making fewer excuses for the clown show in Rome. Merry Christmas Father!

These are days when Mark Thomas would be providing comic relief slobbering over PF and telling us we have to obey PF in all things! Every OF utterance is from God!