MASS CELEBRATED AT THE ALTAR WITHOUT USE OF THE CHAIR, EXCEPT TO SIT AT THE LITURGY OF THE WORD 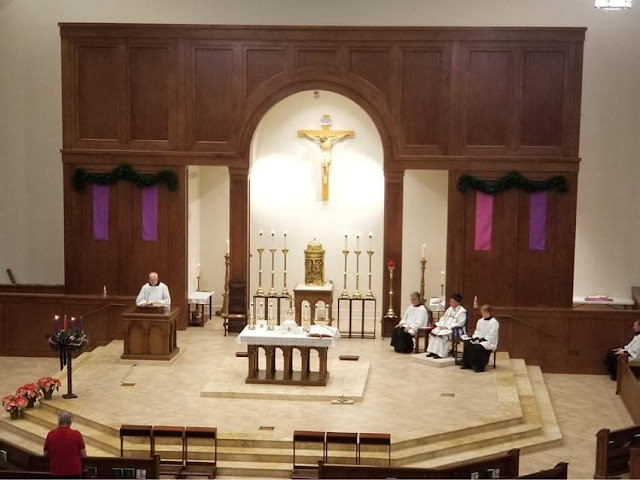 As we all know, the rubrics of the modern rite of the Mass are weak and open to all kinds of machinations.

For example, the norm is for the Introductory Rite to take place at the chair; the liturgy of the word at the ambo and the Liturgy of the Eucharist at the altar. This is true except when it isn’t convenient or the norm can be disregarded.

I have seen since Vatican II and at our recent retreat, the celebrant “perform” the Introductory and concluding rites of the Mass at the altar and only use the chair to sit for the Liturgy of the Word at the ambo. I presume this is permissible because it is quite common especially since the pandemic.

Thus, can we make it up as we go and make the modern rite of the Mass look more like the Traditional Rite of the Mass if the Introductory and Concluding Rites are celebrated at the altar anyway?

And thus, here are my suggested “rubrics” for doing so:

This is for a spoken Mass:

The ministers enter, the priest ascends the altar after the genuflection and kisses it. He goes to the Epistle side to either read by himself or lead he congregation in reciting the brief Introit in the Roman Missal, then he returns to the foot of the altar.

Facing the altar, he begins the “Sign of the Cross” and turns to the congregation and says, “the Lord be with you” with their response. Then he turns back to the altar, introduces the Penitential Act using the Confiteor and absolution. Then he ascends the altar, and recites or chants the Kyrie and then the Gloria if required. Then he turns to the congregation and says, “Let us Pray” and then goes to the Epistle side of the altar to pray the Collect of the Day.

Then he sits for the readings proclaimed by a lay reader.

After the homily, if one is given, the priest ascends to the center of the altar for the Credo if recited and then the Universal prayer. Then the offertory takes place as usual.

I can’t say whether it’s kosher unless I know the rules. The old rule book, Leviticus, was for the Levi tribesmen, so that they’d have clear instructions on how to behave & do their priestly tasks. Since My Lord is the eternal high priest & unblemished sacrificial offering for sin, those instructions and the job of those priests has been fulfilled. Even the first & second temple are no more. Is the Missale Romanum the how to book for the Latin Church? Whatever book it is, don’t have a copy of it.

The words in the appropriate book say what is kosher. So, what exactly does the book say? If there’s room to do it your way, then go ahead and do it. If not, then don’t do it, and make a big stink when others don’t do it right. If they do it wrong publicly, then follow Paul’s step by step instructions on reproving sinners.

I am aware that there are good reasons for the various actions and the placements of them in the old form, but I don’t know what they are. Maybe you could explain the reasons for the positioning, and contrast that depth of meaning with the new form. That would be good. At least for me.

I would say that the more fussy one would try to get with moving the missal from the former epistle side to Gospel side with no resulting action(s), the more difficult it will be to reimplement ad orientem worship. What is being suggested is, to me, movement for movement's sake. Even moving the missal for the incensation should one try to do this with the new books, unnecessary movement. Re-enchantment per this model will likely only be achievable without overburdening it choreography. Divine Liturgy is not burdened in this way.

Why ascend the altar for the introit then return to the foot?

But, but, but….at a solemn high EF Mass, even though the Epistle is chanted below the altar and the Gospel northward, the Roman Missal is nonetheless moved from one side to the other.

As far as “my” rubrics, for the OF Mass, these are to give a semblance of continuity between the two different rites of the formally one Roman Rite.

I'm struggling to understand what you are trying to achieve. An OF Mass can be celebrated ad orientem, the missal is written contemplating this possibility - you've modeled it. Why not focus on perfecting and implementing what's available in a realistic and achievable/scalable way as opposed to trying to introduce elements that aren't there (PAFOTA)? OF Mass is celebrated at least once per day at a shrine about 40 minutes from my home in a lower church that lacks a NO altar. Had this modeling become the norm, this blog, among others, likely would never have come to be.

In a Solemn Mass the celebrant was required to read the epistle and gospel even though they were sung by the subdeacon and deacon respectively. This requirement was only removed in 1960.

Totally agree about the fetish of the 'presider's chair' which dates from 1964. Even when he's not doing anything the priest sits facing the assembly like some great Buddha. Indeed, to 'preside' usually means to be 'in the chair' exercising authority and superintendence over a meeting. (Lat. praesidere, from prae + sedere, to sit above others.) This is essentially what a bishop does when he presides over the first part of the Mass from the throne or faldstool.

In England the Oratorians are known for sound liturgical practice. In Oxford a weekday OF 'low' Mass is read at the altar in English or Latin (apart from the lectionary readings, said by the priest at the lectern) and the missal is on the altar throughout, positioned just left of centre and not moved from side to side. There is no 'prayer of the faithful' and all Masses are 'ad orientem' although due to the church's orientation 'east' is actually west!

Clearly not kosher. The rubrics are totally clear on this point: you kiss the altar and go to the chair and stay there until the preparation of the gifts (unless you're celebrating Mass without a congregation). You may not like the rubrics, but they are what they are. Of course, you could make arguments about organic development, not being legalistic, being in accord with tradition, etc.

Like ByzRus, I'm not sure what you are trying to achieve.

The placement of the celebrant's chair is not part of the rubrics for the Mass, but is discussed in that section of the GIRM which deals with the arrangement and furnishing of churches, in particular section 310. While suggesting that the best place is at the head of the sanctuary and facing the people, it acknowledges that the design of the sanctuary and other circumstances might impede this, one impediment being a centrally placed tabernacle behind the altar - surely the most common placing of the tabernacle?

Where there is a high altar and reredos the sedilia for the celebrant and ministers would normally be on the epistle side facing liturgical north (the traditional arrangement), so for the priest to face the people for the 'Dominus vobiscum' he has to make a quarter-turn, and when he sings the Collect someone has to hold the book for him.

Incidentally the rubrics (GIRM 164-165) allow for the concluding rites to be conducted from the altar rather than from the chair, which might be a preferred option for some as the missal is on the altar at this point.