ARE THE OLD LITURGICAL BOOKS AND THE PRE-VATICAN II EXPRESSION OF THE CHURCH STUMBLING BLOCKS TO THE NEW GNOSTICISM THAT ELITISTS IN THE CHURCH WANT TO FOIST ON THE CHURCH? 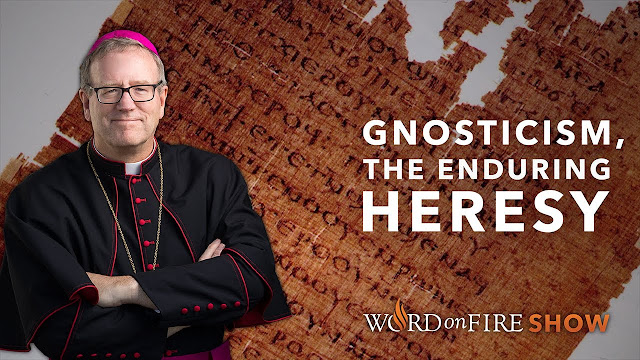 Ever since Pope Francis has been pope he has consistently criticized, ostracized and condemned “rigid Catholics” or “rigidity”. He sees it as a stumbling block for the synodality he proposes and the “God of Surprises” that this new Gnosticism will expose.

Ever since I’ve been a priest, to combat heretical voices in the Church, when I teach religion education classes, like RCIA, I emphasize that all Catholic teachings are out in the open and can be discovered by anyone willing to find those teachings. These are contained in the Deposit of Faith, the Scripture and Tradition of the Church and the Church’s perennial magisterium.

No one in the Church, be he the pope or a lay person has an inside track or knowledge about the Church that isn’t available to anyone else.

I can’t help but think that the current papal phobia toward the older liturgical books and Pope Benedict’s vision of the hermeneutic of continuity in terms of how to interpret Vatican II is that both the pre-Vatican II Church and her liturgical books assure orthodoxy. In this sense, there is a rigidity against heterodoxy and novelty.

The greatest heterodoxy is Gnosticism.

Where will synodality lead us? Just look at the Anglican Communion and all that it allows and supports which is a far cry from the out in the open Deposit of Faith of the Catholic Church. They have become Gnosticism personified.

And how do you promote this new Gnosticism? You marginalize the rigid and accompany them to this new Gnosticism where they humbly genuflect to the elitists who know something they don’t know and promote something that has no basis in the Deposit of Faith or discovered by anyone because it is out in the open available to all not just an elite group.

Ostensibly, justification of the vernacular in the Mass was proposed to facilitate understanding as desired by the laity. However, when the laity desired Latin usage it was denied. I have never heard an acceptable explanation for the arbitrary denial of the Traditional Mass. Even the SSPX claims to be inside the Church and prays for the Roman Pontiff in every Mass they say.

Gnosticism, yes perhaps. I am more inclined to see the denial of the just request of the faithful attached to the Latin Mass as just a good old fashioned power grab. The heterodox members of the hierarchy is hell bent on making us it the porridge whether we like or not.

Pope Francis has blundered on "repressing" the older liturgical books of the Church, just as Pope St. Paul VI did. How can you repress something that was the lex orandi of the Church for centuries and then say it is forbidden to use.

The imposition of the new liturgical books and the chaos of the 1960's caused irreparable harm to the Church, which we are still reaping.

One has to wonder what the Church would have been like if the new liturgical books had been proposed but not imposed in the 1960's.

With that said, though, and I have complained about it on my blog, there are traditionalists who have brought this on. They don't accept the new liturgical books and will avoid a new Mass no matter how well it is celebrated. There is an elitism in all of this that is sickening.

I have written before that as a teenager, the two things I loved about the very early changes in the Mass was "some" vernacular for the laity normally the parts that the altar servers said in Latin exclusively and the priest facing the people). I did not miss the Latin and loved the English.

I began to sour on the changes when the liturgy seem to become sloppy and with no attention to detail and music became trendy folk stuff that even as a kid I knew was junk.

Then things began to spiral out of control and I wondered if the Church was even Catholic anymore. Very disconcerting then and now.

I think the Church would have been in better shape today if the so-called liturgical "reform" had never taken place. It was a disaster of the greatest magnitude. The Laity did not ask for it - it liberated clergy from learning Latin.

"Fr. Allan J. McDonald said...
With that said, though, and I have complained about it on my blog, there are traditionalists who have brought this on. They don't accept the new liturgical books and will avoid a new Mass no matter how well it is celebrated. There is an elitism in all of this that is sickening."

Agree. I have personally witnessed this and found it off putting and alienating. SOME TLM'ers can be elitist, exclusionary and reclusive within their communities. I was so puzzled by this behavior as opposed to being grateful to have the TLM available and just soak in the liturgy. The negativity of some within those communities can be pervasive and cancerous. Emphasis on SOME, by no means all. But it is that SOME that seems to get the attention of the hierarchy.

On the flip side, progressives, who hold themselves out as being the epitome of tolerance can be profoundly intolerant if things aren't their way.

Trying to have, maintain and play in 2 sandboxes is clearly difficult. The sins of our "fathers" created this and there's no easy solution other than shrink hoping to then stabilize and rebuild.

And are the "People of God" now better off than they were before Vatican II? As we pray, so we believe; and look where that's got us. We live in a liturgical waste land and we have lost our way, and our shepherds are otherwise engaged. Do our bishops truly believe that they are in the business of saving immortal souls? No, I'm not judging the bishops but evaluating their actions. Oremus pro Papa nostro!

The number of traddies who carp and complain are an insignificant part of the Church even of those who attend the TLM. However, just the number of the clergy, not even counting offending laity, of the NO rite are the tragedy of the faith. Can they even be ever re-catechized?

This seems as good a place as any to make this statement. I have been suffering a growing conviction that debating people on this blog and on other news and commentary sites is just plain counterproductive.

While I appreciate the insights that are provided by someone's comments once in a great while, I find myself utterly disgusted at myself for allowing myself to be lured into this wasteland of anonymous baiting, attacking, insulting and echoing. I seriously doubt if anyone's mind has been changed about much of anything by what we have posted here over the years.

I have posted on this site using numerous names and Father McDonald may or may not know my true identity. That's not important. What is important is that most of us are saying things on this blog that we would NEVER say to someone face to face no matter how much we might disagree with him.

I'm not saying I will never post here again. But I am going to try to greatly restrain myself and restrict any future comments to something that is relevant or useful. I haven't done much good in that department lately, so I doubt that my posts will be too frequent.

I challenge myself and everyone who posts on this blog to spend more time doing something useful. The blog is fine. What we've done to it...not so much.

I have to say that I agree with you. I too have experienced the same, spent some time away, came back only to find that the same conversation was being had with the requisite baggage that doesn't need to be again be repeated. I don't remember exactly when this blog began, likely around Benedict XVI's election. Such an exciting time for a liturgy geek eagerly anticipating the next set of photos from Rome. 8 years on post-BXVI, we seem to be wallowing in a malaise with nothing to look forward to, no sense of wonder and awe being provided. Thank goodness we have the eucharist and to be honest, I do still look in wonder at the Eastern Church despite it being 30+ years since I first entered one.

Anyhow, I've felt the undertow of the cool kids in the back of the bus, joined them for a bit, then, really questioned myself and what I was doing here. I didn't like the trad keyboard warrior that I had become. I've tried to contribute thoughtfully however, there are still some sitting in the back of the bus. Perhaps its nearing my time to "graduate". Time will tell. Until then, if ever, I keep trying to commit to thoughtful conversation but will combat the bullying as it comes. It's my way, I'm neither a timid nor a small person, my apologies if I've offended you at some point.

Many bloggers don’t allow for comments such as Rorate Caeli. The online National Catholic Reporter no longer allows comments. That heterodox publication commenters were particularly vile.